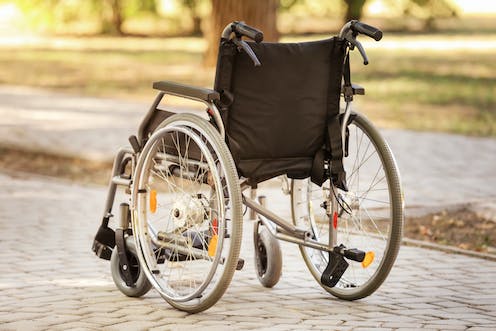 A very precise kind of electrical stimulation has allowed three people with spinal cord injury to walk again. from www.shutterstock.com

A spinal cord injury can change your life in the blink of an eye.

A spinal cord injury can change your life in the blink of an eye.

Read more: Yes there's hope, but treating spinal injuries with stem cells is not a reality yet

Grégoire Courtine’s research group from the Swiss Federal Institute of Technology in Lausanne reported that a kind of treatment called targeted neurotechnology allowed three individuals who had suffered a spinal cord injury to walk again. The technique delivers timed electrical stimulation, called EES, over the surface of the spinal cord.

The EES was effective despite the injury having occurred more than four years previously, and even though the individuals showed either permanent motor deficits (loss of muscle function) or complete paralysis – even after extensive previous rehabilitation.

Improvements were seen immediately following EES: the people were able to voluntarily activate muscles to produce a desired movement – such as extension of the ankle – in the paralysed leg.

Optimising the EES for each individual allowed them to time their movements to EES sequences appropriately. Within five days, participants were able to walk overground and even adjust their leg movements and walking speed.

Perhaps most excitingly, after a few months of targeted EES, participants regained voluntary control over their previously paralysed muscles, even in the absence of EES. This allowed them to walk or even cycle outside of the laboratory.

What is spinal cord injury?

Damage to the spinal cord is typically caused by a traumatic event – such as motor vehicle accidents, sports related incidents or falls. Within Australia, 250-350 new cases of spinal cord injury occur each year, with more than 10,000 people currently living with a spinal cord injury.

When an incident occurs, the vertebrae, or bones, that make up the spinal column may dislocate or fracture. This results in bone pushing on and compressing the delicate spinal cord, causing bleeding and bruising.

The damage results in loss of both motor (muscular) and sensory function below the level of injury. Injuries below the cervical (neck region) typically result in tetraplegia, where all four limbs are affected. Injuries in the thoracic or lumbar region of the cord typically result in paraplegia, causing paralysis of the trunk, legs and lower part of the body.

It is uncommon to completely severe the spinal cord, with some small function often remaining below the level of injury in most individuals.

Our spinal cord serves as the communication highway between our brain and our body.

If a highway is damaged or closed, you can’t travel along it to reach your destination. Similarly, when the spinal cord is damaged, the signals and messages that are normally transmitted between our brain and our body can no longer reach their target destination. This results in loss of muscle control, loss of sensation, bowel and bladder problems and sexual dysfunction.

What is so exciting about this new research is that it suggests several months of EES may be able to restart activity of these pathways. This is consistent with the group’s previous work, but is the first time such an effect has been demonstrated in humans.

This is an exciting step forward in a field of research where so many trialled treatments to improve function after spinal cord injury have failed.

Other attempts have been unsuccessful for a number of reasons. First, many of the models used to explore spinal cord injury don’t accurately mimic the specific types of problems seen in individuals following spinal cord injury. This makes it difficult to translate findings from experimental work into meaningful advancements in the clinic.

Also, spinal cord injury itself is a real mixed bag – not all injuries are created equal. As a result, it’s difficult to find treatments that may be effective for all individuals.

Indeed, even in the study by Courtine’s group, only individuals with less complete injuries to the spinal cord were included. This may limit the applicability of the research to individuals with more severe types of injury.

The success of Courtine’s method also seems to be tied to the use of timed, rather than continuous, EES for the treatment – this allowed the people in the trial to retain a sense of where their legs were placed in space (a sense known as proprioception). Other trials had not used this approach.

What the future holds

While these studies are an exciting advance, future studies in this area will need to overcome some limitations.

First, this method required the people involved to undergo an invasive and resource-intensive series of steps to implant the EES electrodes and determine the best stimulation approach. This may be prohibitive for others due to physical or financial constraints.

In addition, so far the therapy has only been trialled in a very small number of individuals who have experienced relatively mild, incomplete injuries of the spinal cord. This is not indicative of the severity of injury for many.

It is critical that future studies investigate whether EES may be effective even with more severe injuries, including complete injuries where only a few or no undamaged nerves remain.

Read more: Take it from me: neuroscience is advancing, but we're a long way off head transplants

We still don’t know if this technology can lead to improvements in everyday activities.

And it’s important to remember that motor function is only one of a host of symptoms experienced by those with spinal cord injury. In a survey of individuals with paraplegia, they said improvement of bladder and bowel control and restoration of sexual function was more important for their quality of life than being able to walk again.

So while those who have suffered a spinal cord injury have reason to feel cautiously optimistic, there is still much work to be done in this area.