The word “monster” was coined from two Latin verbs “monere” (to warn) and “demonstrare” (to reveal). In tandem, they create a sense of warning, or a portent. The figure of the monster signals what threatens society.

Monster Anthropology combines the interdisciplinary field of Monster Studies, which explores the meanings of monsters, with anthropology, which is concerned with understanding how different peoples see and experience the world in their own specific ways. Less focused on fictional monsters in literature and popular culture, (such as ghosts, zombies, vampires, aliens, dragons, and elves) it considers the monsters who haunt the people anthropologists work with.

These monsters are more than characters in myths, songs, and stories from around the fire. They are “out there” on the prowl, lurking in the shadows, lying in wait, going about their monstrous business in the real world. They appear in all kinds of shapes, and for all kinds of reasons. Some are cheeky and mischievous, some are mysterious, others are downright evil.

But all monsters make their mark on the communities they haunt.

In central Australia, for example, many Aboriginal people are terrified of jarnpa. These monsters may look like humans, but they possess superhuman powers. They can fly as fast as a bullet and make themselves invisible. They love to kill and do so with ease, using either sorcery or brute force.

Jarnpa have existed in the Tanami Desert since time immemorial. In the past, when local people moved across the desert in their seasonal rhythms, jarnpa were held responsible for otherwise inexplicable deaths. A person and a jarnpa must have crossed paths, and the jarnpa did what jarnpa do: it killed.

Nowadays, Aboriginal people live in permanent communities dotted across the desert. It is believed these small towns have become magnets for jarnpa, who flock to them to kill. Interestingly, they kill only Aboriginal residents, while non-Indigenous locals are not even afraid of them.

We can interpret jarnpa as providing insights into prevailing inequalities between Indigenous and non-Indigenous people - in particular the fact that Indigenous Australians have a life expectancy of around 10 years less than those who are non-Indigenous. 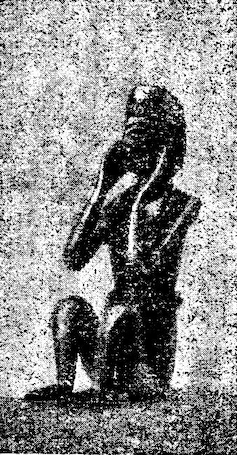 A statue of an Anito. Wikimedia

Another compelling example of monsters who exert a distinct influence over the people they haunt are the Anito, spirits of the Indigenous Tao people on Lanyu Island, Taiwan. Their presence on the island and in the Tao’s lives is all-encompassing.

As the Anito take great joy in spoiling people’s plans, the Tao will not discuss their intentions out loud. For the same reason, the Tao are taught to keep their emotions hidden.

Anger, for example, is said to draw the Anito in, enabling them to detach the soul from one’s body. To ward off this danger, children are taught to suppress anger from an early age. Through these and more examples, anthropologist Leberecht Funk illustrates how the Anito shape every aspect of Tao life.

Other monsters are less intrusive, but this does not mean they are any less potent of meaning. Take the Latharr-ghun, for example. This is a big, black, scaly dragon said to live in caverns and underground tunnels in and around Litchfield National Park in the Northern Territory.

The traditional custodians of the land under which the Latharr-ghun roams, the Mak Mak Marrangu people, told anthropologist Joanne Thurman how it can pop up through soft soil and pull you down with it. 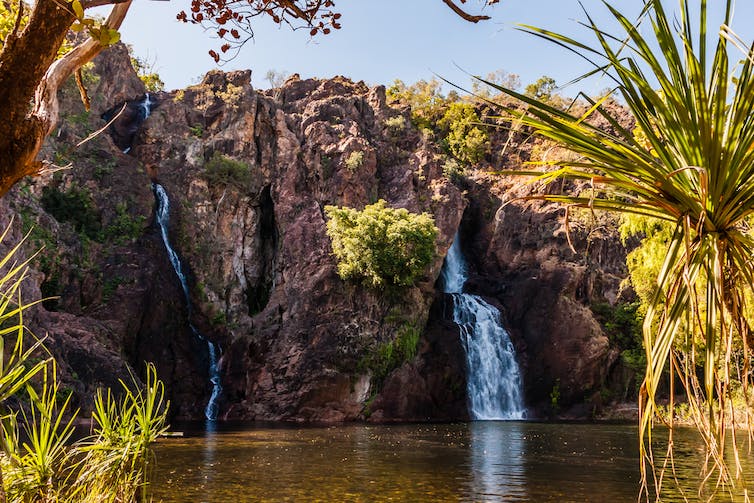 In Litchfield National Park, the Latharr-gun lives in caverns and underground tunnels. Shutterstock

The Mak Mak Marrangu know how to recognise the “th-d-th-d-th-d” sound signalling its approach. They say they learned how to calm the Latharr-gun from “the old people”. It’s imperative to stand very still, while announcing in the local language that one belongs to the land. Slinging some sweat in the direction of the Latharr-gun also helps, as that way it can smell that one is “from here”.

Put differently, the danger the Latharr-gun poses can be mediated by custodians only. In the context of a contested land, over which Aboriginal, mining, pastoral, and National Park interests clash, the Latharr-gun becomes a strong if dangerous ally.

Icelandic anthropologist Helena Onnudottir describes another monstrous ally: the Tröll. Human-like in appearance but larger and bit uncouth and rough, they live in caves and crevasses across Iceland and make their presence felt in a number of ways.

Like other Icelandic monsters, they are the idiom through which Icelanders know their land – and themselves. Further, as Onnudottir describes, in a situation of danger she “called on her Tröll … and the Tröll headed her call,” ensuring her safe passage. 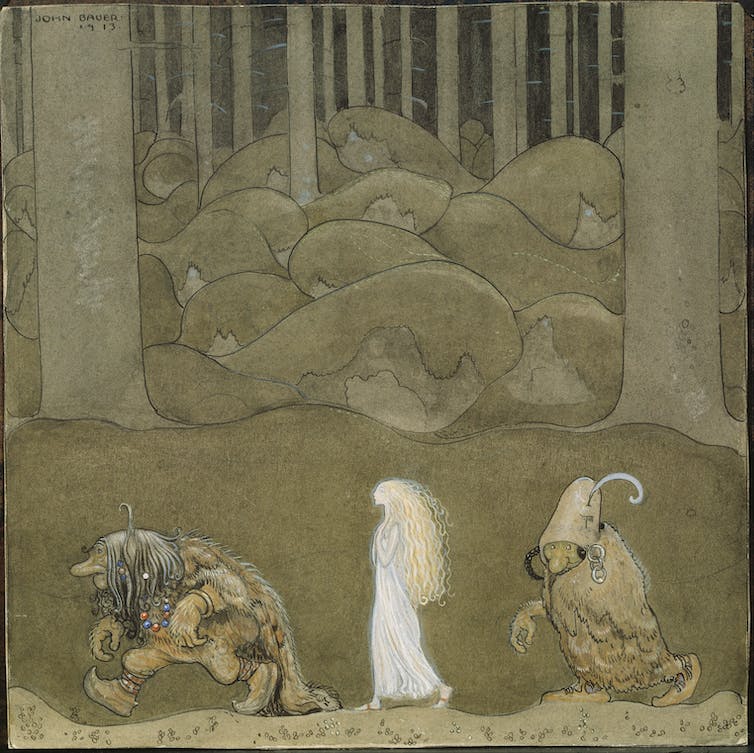 The Princess and the Trolls, John Bauer, 1913. Wikimedia

Such ambiguity in nature, being both threatening and familiar at once, is characteristic of all monsters.

Monsters always take on specific cultural meanings wherever they are found. Consider ghosts, for example. They are one of the most prolific monsters, existing everywhere across time and space. And yet, they do so differently.

Ghosts in Fiji are recognisably related to other local supernatural beings and take on the same responsibilities as ancestral spirits. According to anthropologist Geir Henning Presterudstuen, they reinforce central cultural beliefs about Fijian cosmology, joining in with ancestors protecting the wellbeing of land and people. As they haunt people they also reflect the same concerns about ethnic and social relations that preoccupy the locals, such as sexual morality and maintaining racial borders.

Read more: Friday essay: why YA gothic fiction is booming - and girl monsters are on the rise

Meanwhile ghosts in North Maluku, Indonesia, as anthropologist Nils Ole Bubandt reports, are part of the current political climate. For instance, a series of unnerving events was understood to be caused by the ghost of a woman whose husband had been killed in a conflict.

The woman had joined in herself, only to be raped, killed, and dumped in the forest. Her haunting the living echoed her own trauma and that of the conflict more widely.

The study of monsters can be a shortcut towards understanding different fears and how they manifest culturally. This is why taking other people’s monsters seriously becomes ever more urgent in these apocalyptic times of climate change, wars, inequality, terrorism, deforestation, extinction, floods, fires, and droughts.