This week, Opposition leader Bill Shorten used a major foreign policy speech at the Lowy Institute to announce that, if elected, a future Labor government would establish an infrastructure investment bank for the Pacific islands.

The announcement comes at a time of increased public scrutiny of Australian aid to the Pacific, driven by concerns over China’s heightened presence in the region. Many have argued that Australia’s “benign neglect” of the region has led Pacific governments to seek more assistance from China.

Australian aid, by comparison, has been criticised for focusing too heavily on governance projects instead of infrastructure investments. The Vanuatu government, for instance, has justified the construction of a China-funded wharf and roads by saying:

No donor was willing [to] help provide assistance on these projects although the economic benefits [are] huge.

Though not entirely a surprise, Shorten’s announcement does represent a change in Labor’s approach to aid. In February, Shadow Foreign Minister Penny Wong gave a speech outlining Labor’s future aid policy that focused on health, education, gender and climate change, but made no mention of infrastructure. Then, in July, she shifted tone, calling for greater emphasis on infrastructure in the Pacific.

The Coalition has also responded to rising Chinese influence in the region, committing to the construction of underseas internet cables to the Solomon Islands and Papua New Guinea to head off earlier bids by Chinese companies. 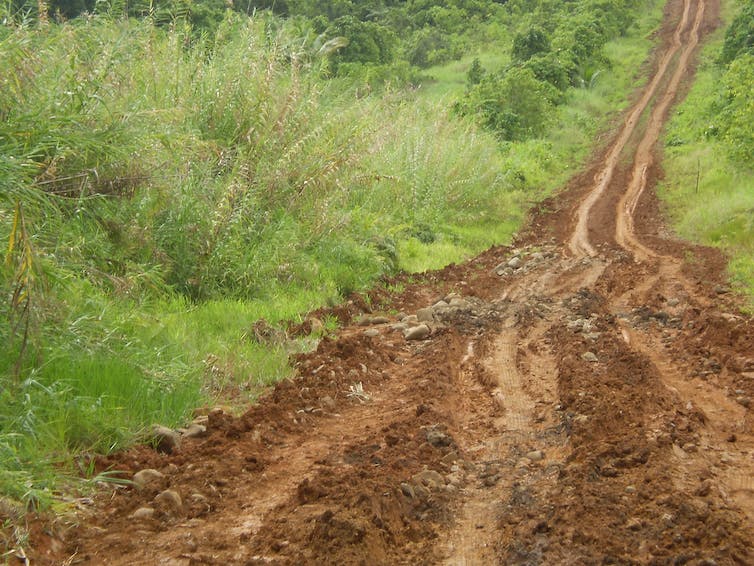 Australia has for many years effectively delegated infrastructure lending to multinational development banks: the World Bank and Asian Development Bank (ADB). Shorten is now flagging that under a Labor government, Australia will itself provide concessional loans for projects like this on a bilateral basis.

None of this is to suggest that Australia has been completely absent from the infrastructure sector in the past, though its focus has traditionally been stronger in other areas, such as education and disability projects.

Australia has also invested heavily in “soft” infrastructure in the Pacific, or the technical and managerial expertise and institutions needed to manage new infrastructure projects, such as bridges, roads and ports.

Such support is important, even if outcomes are difficult to measure. Without managerial or technical expertise, as well as appropriate institutions, infrastructure projects often fall into disrepair. A stark example is the tragic account of the decline of a village in Papua New Guinea following the deterioration of its airstrip.

A new reliance on concessional loans

Australian aid has been used on occasion for infrastructure projects in the Pacific, mainly through grants to complement World Bank and ADB loans. But Australia has not been in the business of providing its own loans for infrastructure development. That much is clear. And in this respect, Shorten’s announcement is significant.

If Australia is determined to move more firmly into the infrastructure game to counter Chinese lending in the region, it makes sense to fund such projects with loans.

Grants are ill-suited for infrastructure projects for which there is a strong commercial case (such as the Solomon Islands internet cable). They distort market incentives and divert scarce aid resources away from other priorities.

There are clearly potential benefits for the region from a new infrastructure bank. The Pacific suffers from an enormous infrastructure deficit, particularly in remote rural areas. There is also considerable evidence that points to the importance of infrastructure for economic development and poverty alleviation.

China Exim Bank loans, though concessional, are generally not great value for money, with higher interest rates and shorter repayment periods than those offered by other lenders, including presumably any new Australian infrastructure bank.

A large number of unanswered questions

Having said that, we should put the hubris in Shorten’s speech to one side. It makes no sense to aspire, as he said, for Australia to become the Pacific’s “partner of choice” for infrastructure projects. We can only finance a small fraction of the region’s needs, and Pacific nations will have good reason to look to other infrastructure providers, such as China. We’re not that special.

Turning from rhetoric to policy, more detail is needed before we can determine conclusively whether such a bank would be positive for the region. Shorten’s speech only indicated that Labor would:

…actively facilitate concessional loans and financing for investment in these vital, nation-building projects through a government-backed infrastructure investment bank.

That leaves a lot of questions unanswered.

Should the new bank lend to governments or the private sector, or both? To what extent will projects be selected on the basis of rigorous benefit cost analysis? How will “bankable” projects be identified? Will loans be available to all Pacific island countries, including those currently in debt distress? Will concessional loans come at the expense of existing aid priorities, including Australian funding for “soft” infrastructure?

The answers to such questions are important. After all, it is Australia’s overall approach towards infrastructure that will ultimately drive long-term impacts.