Australia has become a destination for a legion of far-right speakers from North America and the UK in recent months.

Milo Yiannopoulos’ controversial visit last December resulted in violent clashes between protesters and a A$50,000 bill for Yiannopoulos for extra policing. (He never paid it.) Nonetheless, Yiannopoulos is planning a return in late November.

This was followed by the visits of Canadians Lauren Southern and Stefan Molyneaux, which sparked more anti-fascist protests and resulted in another large police bill that remains unpaid. Southern’s “It’s Okay to be White” T-shirt served as the inspiration for Senator Pauline Hanson’s recent Senate motion declaring the same message.

Read more: Speaking with: journalist David Neiwert on the rise of the alt-right in Trump's America

None of these speakers has yet to attract an organised movement of followers in Australia. But these tours are certainly having an impact on society, as Hanson’s Senate motion illustrates.

An ABC investigation revealed that the NSW Young Nationals were infiltrated by members with links to the neo-Nazi fight club that provided security for the Southern/Molyneaux and Farage tours. And Yiannopoulos was even given a platform to speak at Parliament House, the invited guest of Senator David Leyonhjelm. 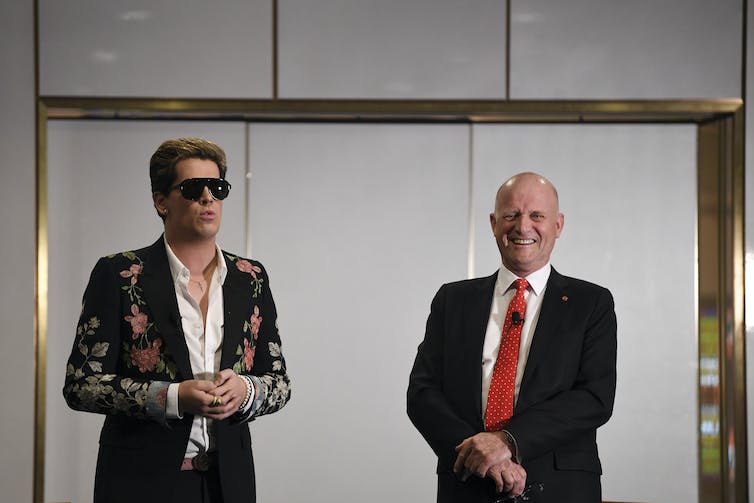 Yiannopoulos alongside Leyonhjelm at Parliament House last year. His appearance was vehemently opposed by the Greens. Lukas Coch/AAP

With the imminent visit of Canadian Gavin McInnes, the leader of the far-right group Proud Boys, Australia could be about to witness an acceleration of organised alt-right activity.

Originally scheduled for next week, McInnes’ tour has been postponed until December. Now dubbed “The Deplorables Tour”, it has been expanded to include Tommy Robinson, the founder of the far-right street gang English Defence League and the most prominent anti-Muslim voice in the UK.

‘The Leader of the Patriarchy’

McInnes and the global Proud Boys fraternity he founded in 2016 is engaged in a culture war against political correctness, Islam, feminism and all that is supposedly destroying Western civilisation.

A recent promotional video of his upcoming tour of five Australian cities sets the tone for his brand of hate-filled rhetoric:

I’d like to identify the elephant in the room. Which is you, you are a fat woman.“

Over the next minute, McInnes is exulted as "the leader of the patriarchy, the ultimate male, the legendary Western warrior and a proud Western chauvinist”. He talks about punching people in the face while footage shows him doing exactly that. As Mcinnes states very clearly:

This is a civil war. My job is to fight.

‘This is a civil war. My job is to fight,’ McInnes says.

Who are the Proud Boys?

The bearded, bespectacled McInnes was recently described by The New York Times as a “former Brooklyn hipster turned far-right provocateur”. One of the co-founders of Vice Magazine, he has used his trademark aggressive style in recent years to carve out a career in the alt-right media sphere as an outrageous cultural agitator.

The Proud Boys is McInnes’ fan club. The male-only group now has chapters across the US, Australia, Canada and UK, all formed in the past 18 months. Proud Boys members, many of whom wear signature black and gold Fred Perry shirts, have become a conspicuous presence at many violent protests in the US. One member, Jason Kessler, organised the “Unite the Right” rally in Charlottesville, Virginia, that resulted in one woman’s death.

Videos of numerous street fights involving Proud Boys members have circulated widely online in recent months. On the eve of the one-year Charlottesville anniversary, Twitter decided to delete several Proud Boy accounts, including McInnes’ account, due to the violent extremism of the group.

Last week, five Proud Boys were arrested for brawling after McInnes “re-enacted” the 1960 assassination of the head of the Japanese Socialist Party at the Republican Party’s Met Club in Manhattan.

McInnes claims the Proud Boys only fight in self-defence, yet he frequently states the mantra:

You’re not a man until you’ve been beaten up. And you’ve beaten up someone else.

Indeed, to become a fully-fledged member of the Proud Boys, a man must take a beating and also engage in violence in “service to the cause”. The aim is to achieve what McInnes calls the “fourth degree”. The first degree is a declaration of a belief in Western chauvinism, the second is to take a friendly beating while reciting breakfast cereal names, the third is a Proud Boys tattoo and the final degree is to engage in battle.

This commitment to violence is deeply concerning. Already, the small Australian Proud Boy chapters have started to make their presence felt at conservative rallies despite claiming to be apolitical. And McInnes’ upcoming visit could give members the opportunity to reach the “fourth degree” through the type of violence frequently seen in the US.

Shadow Immigration Minister Shayne Neumann has called for McInnes’ visa to be denied on grounds he poses a “significant risk” to Australia.

And a petition against Mcinnes’ visit has thus far attracted 33,000 signatures.

Despite the group’s history of violence, its Western chauvinism should be of even more concern to Australians.

When members are admitted to the Proud Boys, they are required to make a public declaration:

I am a proud Western chauvinist and I refuse to apologise for making the modern world.

What exactly does this mean? McInnes has made some of his views clear in the past, stating:

I think the west is the best, But I don’t think other cultures are different, I think they are worse

I’m an Islamophobe, a xenophobe and pretty darn sexist

Clarifying his views after being criticised as a white supremacist, McInnes said the Proud Boys are not racist or homophobic and that members of any ethnicity or sexual orientation can join.

But the group clearly has a belief in the superiority of Western civilisation. Potential immigrants are ranked according to their assumed commitment to Western civilisation. McInnes puts Western Christians at the top, and ranks Indians higher than Chinese. Muslims are deemed undesirable due to their supposed inability to integrate and their “animosity to the West”.

This is racist dog-whistling. A recent quote by pornographer and Penthouse publisher Damien Costas, who is funding McInnes’ Australian tour, shows how this works:

This is an effective strategy to appear non-racist while also propagating the myth that Western civilisation is under attack through migration.

Speakers like McInnes provide fuel for this frequently uncivil and indignant response to complex issues like immigration and ethnicity.

Why Australia? And why now?

McInnes has called Australia the last vestige of masculinity in the “free world”. And Yiannopoulos has called the country the last remaining bastion of free speech.

Until recently, Australia has been an untapped market for the far right. Figures like McInnes are now seen as celebrities. They tour packed-out auditoriums like rock stars. Case in point: even at A$1,000 a head, the upcoming private boat cruise with Yiannopoulos and far-right commentator Ann Coulter on the Gold Coast is sold out.

For the eager Australian Proud Boys, McInnes’ visit is seen as a chance to earn their “fourth degree” through battle. For the rest of us, it’s an opportunity to debunk spurious racism dressed up as a defence of Western civilisation.