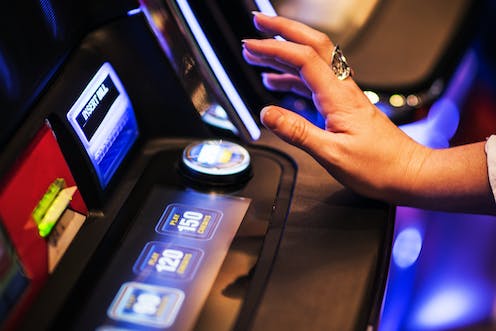 Lights and sounds coming from electronic gambling machines – also known as EGMs, pokies or slots – contribute to their addictive potential according to new research published today.

Scientists from the University of British Columbia, Canada, set up experiments with human subjects using gambling tasks and “sensory cues” such as flashing lights and catchy tunes.

They found that people made riskier decisions and were less able to interpret information about their probability of winning when exposed to cues associated with previous wins.

Read more: Removing pokies from Tasmania's clubs and pubs would help gamblers without hurting the economy

It was known from earlier animal studies that sensory cues, such as flashing lights or sounds, when paired with a reward, lead to “riskier” decision making. Prior to the new study, this had not previously been demonstrated in humans. However, it is not unexpected, given what we know of Pavlovian, or classical, conditioning.

Classical conditioning has been understood for over a century as the mechanism for training animals (including humans). Thus, training a dog to sit becomes easier if the reward (food, or some other pleasurable event) and the command (the cue) are associated.

Many of us working to understand pokie addiction have developed a model that combines the principles of two types of conditioning – operant (focusing on the reward structure) and classical (looking at the cues) – and tie these with how the brain’s reward system operates.

As well as rewards and cues, environmental, social and economic factors also play a significant role in the establishment of gambling addiction. However, the pokie itself is increasingly seen as a crucial element of this addiction system.

In their new study, lead authors Catharine Winstanley and Mariya Cherkasova subjected humans to rewards accompanied by sensory cues such as flashing lights and casino sounds. This increased arousal, or excitement – measured by dilation of the pupils of the eye. It also lead to a decline in sensitivity to information about odds and probabilities.

Losses disguised as wins occur when a pokie user bets on multiple “lines” on a machine. This makes it possible to get a “reward” that is less than the amount staked. For example, with a bet of $5, the user may “win” fifty cents. The game will celebrate this $4.50 loss with the usual sounds and visual imagery associated with an actual win.

The result is that the stimulus provided echoes that for an actual win. This appears to make users overestimate their winnings. It also effectively doubles the amount of reinforcement achieved by the game, at no cost to the operator.

Read more: Australia has a long way to go on responsible gambling

In the Australian states of Tasmania and Queensland, losses disguised as wins are prohibited on consumer safety grounds – no stimulus is permitted when the “win” is less than the stake. The paper published today provides strong evidence for extending this prohibition to other jurisdictions.

The new research also helps fill in one of the gaps in our detailed understanding of the addictive potential of pokies, and provides additional evidence to support more effective regulation of pokies.

Along with social and other research, this can help to reduce the significant harm associated with pokies, and other forms of gambling.