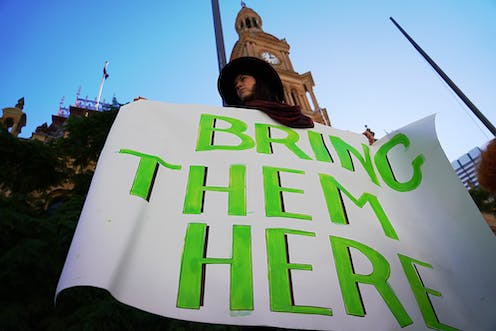 Australia’s off-shore detention policy is unravelling. Predictably, after five years of detention, the mental health of adults and children who have been left in indefinite detention on Nauru is collapsing. On Monday, 11 children and their families were flown to Australia for urgent medical attention.

The New Zealand deal, under which some asylum seekers could be resettled in New Zealand as long as they are banned from ever coming to Australia, is now being seriously considered.

From the middle of 2013, when off-shore processing was re-started on Nauru and Manus Island, the Rudd government, and later the Abbott government, made bold and irresponsible claims that no asylum seeker attempting to enter Australia by boat would ever be resettled here.

This played well to an Australian public spooked by a dramatic rise in boat arrivals under the Rudd government between 2009 and 2013, and set the foundation for a policy that has systematically brutalised hundreds of innocent people.

The claim, in the name of deterrence, relied on hopes Australian governments would find places to resettle the asylum seekers and refugees on Nauru and Manus Island in other countries. But there was no plan as to where they might go and, predictably, resettlement proved very difficult.

An agreement with the Cambodian government failed because Cambodia lacks the capacity to resettle people of such different ethnic and cultural backgrounds.

Malcolm Turnbull seemed to have stumbled upon a resolution when the Obama administration agreed to take sone refugees from Nauru and Manus.

The current US administration has resettled 276 people from Nauru and rejected a further 148. There may be more resettlements to come, but there is no clear timetable, and it will be a resolution for only some of the 652 people remaining on Nauru.

Inexplicably, the Australian Government has repeatedly rejected an offer from New Zealand to resettle 150 refugees there, fearing that people will take advantage of open migration between Australia and New Zealand and will end up resettling here.

Under renewed pressure from opposition parties, the government is reconsidering the New Zealand offer, but only if there is a travel ban preventing refugees ever coming to Australia. Prime Minister Scott Morrison has drawn, once again, on the tired justification that to allow asylum seekers any right of entry to Australia may encourage people smuggling.

Why the people smuggling argument does not stack up

The people smuggling narrative does not withstand reasonable scrutiny. How much cruelty to innocent people on Manus and Nauru is really needed to stop the boats?

A comparison with the Howard years is instructive. From 2001 to 2008, of the 1,153 refugees and asylum seekers resettled on Nauru and Manus Island, 705 went to Australia, 401 to New Zealand and 47 to other Western countries. Most were resettled between 2002 and 2004.

Read more: Resettling refugees in Australia would not resume the people-smuggling trade

These resettlements were not followed by a resumption of the people smuggling trade. From 2002 to 2007, 18 boats arrived with 288 asylum seekers. In addition, one boat was turned back with 14 passengers.

What remained important for deterrence was the possibility of being detained offshore with no guarantee of being settled in Australia and New Zealand. Only when this possibility was removed (when the new Rudd government dismantled the Howard government’s offshore processing and turn-back policies) was there a dramatic spike in asylum seekers arriving by boat.

The message of deterrence is clear

The systemic cruelty of detaining refugees in offshore detention centres indefinitely has sent an unequivocal message to any asylum seekers who might contemplate seeking asylum in Australia by boat. No person would countenance subjecting themselves to the mental and physical trauma suffered by detainees on Nauru and Manus Island for the chance of receiving protection in Australia. And no parent would risk subjecting their child to a lifetime of mental illness.

The Australian government has proved its mettle. It is prepared to subject innocent people to the cruellest of punishments, to disregard basic principles of human dignity, and to ignore its obligations under international law. This is deterrent enough for any prospective boat rider.

It is well past time to resettle every refugee and asylum seeker on Manus and Nauru in Australia. If this is done while the policies of boat turn backs and offshore detention remain in place, this will not lead to a resumption of people smuggling operations. And if I am wrong in this, we can be confident of stopping the boats again, as the government did with startling effectiveness in 2001 and 2013.

It seems that the government may finally be softening its untenable hard line. With no other resolutions on the table, most of the refugees on Nauru and Manus must end up in Australia or New Zealand.

Until this happens, the mental health of refugees stuck on Nauru and Manus will continue to deteriorate, and courageous whistleblowers will continue to risk their employment revealing the brutality and trauma of conditions in detention.

All this pain and suffering, and economic cost, for a deterrent that is not needed.