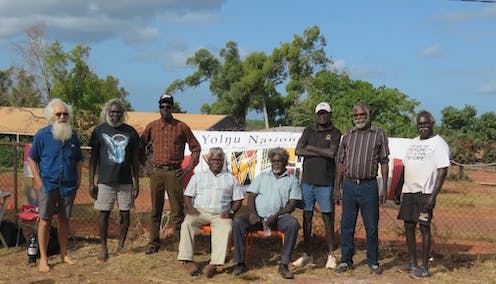 After Yingiya Guyula was elected as a member to the NT Legislative Assembly in 2016, he rose to give his inaugural speech and started speaking in his first language, Yolngu Matha.

Yolngu Matha is dominant language of Guyula’s electorate, and the third-most commonly spoken language in the NT. Nevertheless, he was interrupted by the speaker, Kezia Purick, because he wasn’t complying with recently enacted standing orders that placed barriers on speaking languages other than English in parliament.

A year earlier, another member, Bess Price, was repeatedly told she could not use the Warlpiri language when addressing the Legislative Assembly. The speaker told her:

should a member use a language other than English without the leave of the Assembly it will be ruled disorderly and the member will be required to withdraw the words.

The NT is the most linguistically rich state or territory in Australia, with 70% of Aboriginal residents speaking an Aboriginal language. Despite this, it is the only Australian jurisdiction where parliament has formally enacted standing orders limiting the use of non-English languages and interpreters.

The standing orders prohibit the use of interpreters in parliament and limit the use of non-English languages to pre-prepared remarks when a written English translation has been provided by MLAs in advance.

Read more: Reviving Indigenous languages – not as easy as it seems

As a result, the Legislative Assembly has become what is effectively an English-only body.

After his inaugural speech, Guyula formally requested changes to allow for extemporaneous bilingual speech and interpreters in the chamber. But the standing orders committee refused the request. The committee’s single concession was that it would allow further submissions in 2018, but it has given no indication it will reverse its decision.

How a monolingual approach stifles democracy

Purick has justified the English-only approach by saying it’s “fair” and that it doesn’t create inequality within the Legislative Assembly. The chair of the standing orders committee has also questioned whether parliament should have to “tolerate” members who can’t do business in English.

But this approach actually serves to weaken our representative democracy in several ways:

there has been deep injustice done to the Aboriginal people of the NT, including … the repression of their languages and cultures … which have left a legacy of trauma, and loss that needs to be addressed and healed.

Rejecting the requests of elected Aboriginal MLAs to use the languages of their electorates seems to be another example of “repression of language”. Reconciliation is not just something parliamentarians should direct others to do, it’s something that needs to happen within parliament itself.

Multilingualism works in other parliaments

Dozens of countries around the world have bilingual and multilingual parliaments. In New Zealand, Maori interpreters have been provided in parliament since 1868 and legislation has been translated into Maori from 1881. Today, interpreters are available for all parliamentary sittings and parliamentarians have the absolute right to speak in Maori.

Although the European Commission uses English, French and German as its working languages, the European Parliament has hundreds of translators and interpreters on hand to translate all speeches and documents into the bloc’s 24 official languages. The parliament says:

it is a fundamental democratic principle that every EU citizen can become a Member of the European Parliament, even if he or she does not speak one of its working languages.

The way forward for the NT Legislative Assembly is not difficult. Each MLA could be given an allowance to use for interpreters in the languages and topics most relevant to their constituencies. Aboriginal-language speeches or questions in the assembly could also be sent to an interpreter service for translation into English and inclusion in the Hansard.

Non-Aboriginal MLAs representing large Aboriginal electorates would also benefit from this provision in order to better connect with their constituencies.

Read more: A new way to recognise an Indigenous nation in Australia

Providing interpreters in five Aboriginal languages for every day of parliamentary sittings would cost around A$110,000 per year (based on the set rate of A$70/hour paid by the Aboriginal Interpreter Service). Multilingual Aboriginal interpreters are already in use in far more challenging and complex situations, such as in NT courts and hospitals.

And allowing MLAs to give extemporaneous bilingual speeches and questions wouldn’t require interpreters and would therefore cost nothing other than time.

The NT is a rich, multilingual society. How can the Legislative Assembly claim to fully represent the breadth of NT society when it chooses to be monolingual? It’s time to recognise the rightful and beneficial place of Aboriginal languages in places of power.