The discovery of a rare mineral (reidite) at the Woodleigh meteorite impact structure in Western Australia was published this week by Curtin University honours student Morgan Cox and colleagues.

Reidite – and other minerals – are sometimes formed when meteorites crash into Earth.

This takes a particular set of circumstances. Only six prior discoveries of reidite had ever been reported.

Here’s what happens when a meteorite slams into Earth. 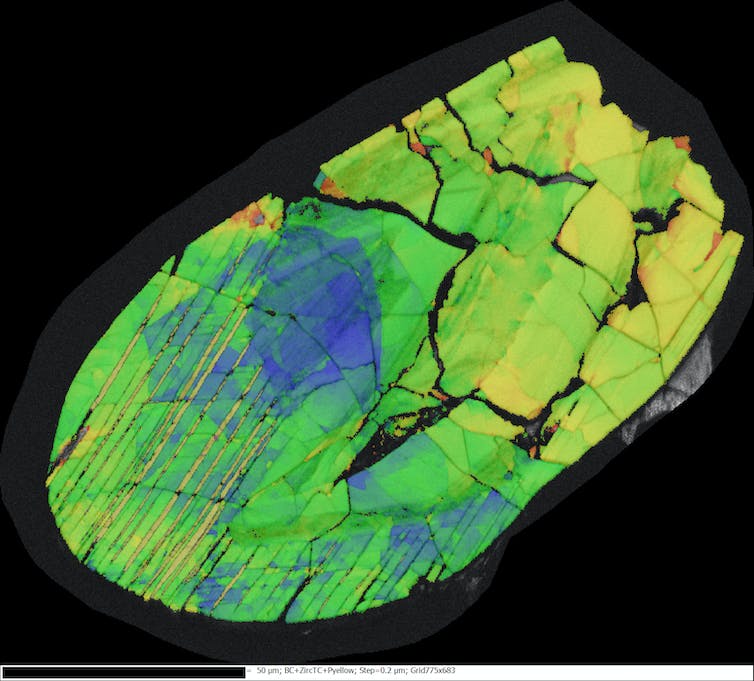 Yellow lines of the rare mineral reidite can be seen running across the crystal structure of zircon in this sample from a meteorite crater. Geoscience World

Our planet is continuously bombarded by meteorites – rocks from space – and has been since its formation about four and half billion years ago.

These objects include rocky and metallic asteroids, comets and other debris left over after the formation of the solar system, rock fragments ejected off planet surfaces from impact events and potentially even rare visitors that have travelled from outside our Solar system.

Space objects range in size from tiny particles to huge asteroids. They are usually travelling towards us at velocities of many kilometres per second – so-called hypervelocities.

Fortunately for us, though, small rocks are the most common, and Earth’s atmosphere simultaneously slows them down, burns them away and breaks them up. We can often see this happening as fireballs and meteor showers. Any surviving chunks of rock free fall to the Earth’s surface to be collected as meteorites.

The Fireballs in the Sky team at Curtin University has an amazing network of cameras to track incoming fireballs and predict the final land location of meteorites – and work out where in the Solar System they came from. They’ve made some great meteorite discoveries in this way.

Read more: How to find a meteorite that's fallen to Earth

Some rocks never make the final landing. Some may also produce an airburst – an atmospheric pressure wave that can cause damage like at Chelyabinsk in Russia in 2013. Here, an asteroid approximately 20 metres across and travelling at 19 km per second exploded about 30 km above the ground, causing a blast that was strong enough blow out windows of buildings in six nearby cities.

Too big to slow down

Some incoming rocks are too big for our atmosphere to slow down, and these are much more rare.

These slam into the Earth at hypervelocities, which imparts a huge amount of energy and causes impact craters. The size of an impact crater mainly depends on the dimensions, density and speed of the meteorite.

There are many known impact craters in Australia, such as Wolfe Creek in the Kimberly, and Gosses Bluff near Alice Springs. We also know of craters that are now buried under layers of recent sedimentary rocks, such as Woodleigh, Western Australia.

Globally, around 190 impact craters (or their eroded remnants) have been discovered on Earth – a lot fewer than scientists predict should have formed over all of Earth’s history.

This is because the Earth’s surface is quite a dynamic place, and processes of erosion and plate tectonics act to erase evidence of impact craters over time.

The known craters range in diameter from a few metres to a few hundred kilometres across, and range in age from a few thousand years to approximately two billion years.

No impact craters have formed in recent history, so scientists rely on studying ancient craters in combination with laboratory experiments and computer simulations to figure out what happens during such catastrophic events.

A hypervelocity impact event puts the impactor (that is, the rock arriving from space) and “ground zero” target rocks under immense pressure, which propagates through the Earth as a shock wave faster than the speed of sound.

It is not uncommon for the rocks to reach pressures in the tens or even hundreds of gigapascals – equivalent to a hundred billion times the pressure of Earth’s atmosphere. Even in the fractions of a second that rocks spend at these pressures, some minerals transform into new “high-pressure” minerals.

For example, graphite can form diamonds, and the mineral zircon can turn into reidite – as described in the new paper.

As the shock wave passes, heat energy is produced by the release from high pressure. This can heat the rocks enough to melt, and in many cases even completely vaporise the meteorite and rocks at ground zero.

Shock waves also cause a lot of damage to rocks. They may break into fragments and get ejected high into the atmosphere and even into space, leaving behind a bowl-shaped crater.

Eventually the shock wave loses energy, so it slows down and becomes less destructive, and ripples through the Earth as seismic waves similar to those emitted during an earthquake.

In huge impact events – like the one that caused extinction of the dinosaurs and the 180 km across Chicxulub Crater in the gulf of Mexico – the centre of the crater is pushed upwards to form a central peak or peak ring.

It is quite alarming to think that all of these things occur within seconds to minutes of an impact, and can leave long-lasting scars on Earth’s surface, cause significant environmental effects, and even result in mass extinctions.

Impact craters are relics of truly catastrophic events on Earth. Rare mineral formation is just one of the possible outcomes when rocks arrive from space.