The genus Acacia is Australia’s largest, containing nearly 1,000 different species. It includes our national floral emblem, the golden wattle, and is the source of the green and gold colours of many of our sporting teams. The variety of acacias is mind-boggling.

There are many well-known small, short-lived species that thrive both in their natural habitats and in suburban gardens, where they are known for attracting insects and birds. There are species that survive in the arid inland as inconspicuous, stunted shrubs that are more than 200 years old, and there are also tall forest trees such as the blackwood, Acacia melanoxylon that can live for centuries.

The black wattle, Acacia mearnsii, falls somewhere between these extremes. It ranges from 6 metres up to (occasionally) 15 metres in height. It is generally called “short-lived”, but often makes it past 20 years old, and may persist for 30 years or more under the right conditions. 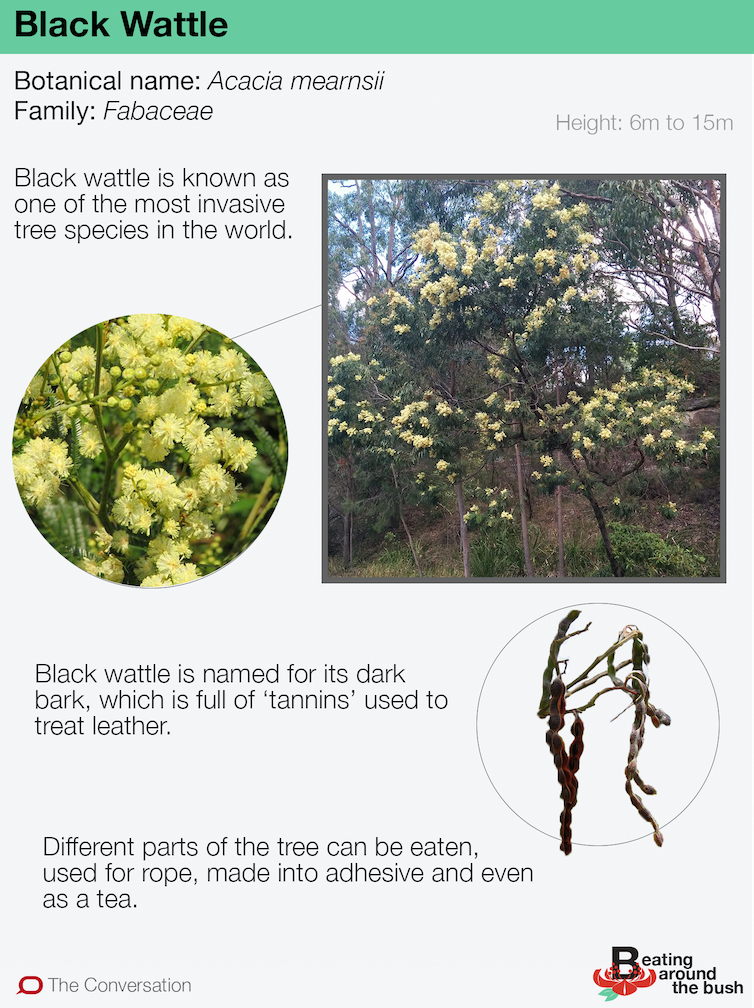 The Conversation, CC BY It has attractive bi-pinnate (feathery) leaves, dark green foliage, and smooth, dark bark – hence its common name. It has the typical pale yellow to golden wattle flower. Its pea-like fruits are typically 10mm wide and up to 150mm long, which as they dry out can rattle on the tree. These fruits contain many tough, black seeds that can readily germinate if damaged, which breaks the hard seed coat. This explains the high weed potential, but makes them easy to propagate. Different indigenous groups used wattles for various purposes. Seeds were often consumed as food. The bark of many species, including black wattle, was used for coarse rope and string, and the tannins and gums in the bark of black wattle were used as adhesives. Indeed, they are still used in the manufacture of some modern veneered and laminated timbers. An infusion of the bark in water has also been used for medicinal purposes. 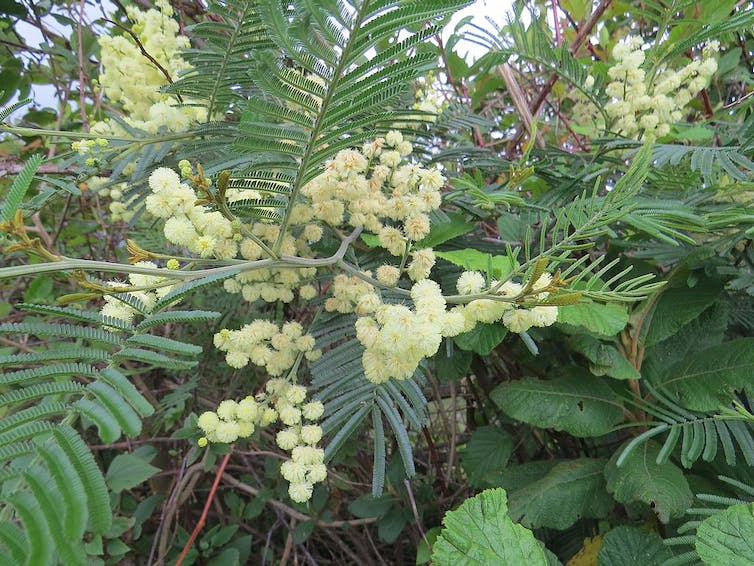 Despite the name, black wattle have golden flowers – they’re named after their dark bark. Vinayaraj/Wikipedia, CC BY Unusually, black wattle is probably better known and used outside Australia. Its fame and infamy stem from the fact that it has been grown for more than a century as far afield as South Africa, Portugal and Germany. It was grown in plantations here and overseas, as its bark and wood contain high levels of chemicals called tannins, used in tanning leather. Indeed, many of the famous horse-riding paths, such as the Melbourne tan track around the botanic gardens, were once surfaced with black wattle waste from tanneries. The infamy arises because in many places, including parts of Australia, it is regarded as a highly invasive weed. Read more: Do you know a Bunji from a Boorie? Meet our dictionary's new Indigenous words The tree was also grown locally and in places like India as a source of firewood and timber for light construction. It is easily killed by fire, but can also sucker prolifically, which can give rise to dense thickets that virtually eliminate other species. The bark and crevices are home to many insects, fungi and bacteria. Some arborists who have worked with the species dislike its brittle wood, as broken twigs and branches can easily cut workers with a risk of subsequent infection. So be wary when working with it! 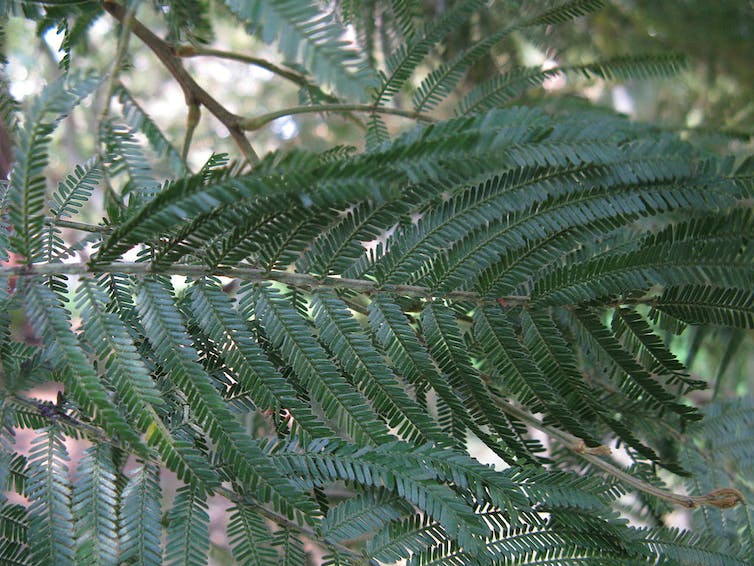 Black wattle have feathery, bifurcated leaves. KENPEI/Wikipedia, CC BY Given its occurrence over a large part of southeastern Australia, black wattle occurs naturally in a diverse range of habitats, from open eucalypt forests to drier woodlands and grasslands in New South Wales, Victoria, South Australia and Tasmania. It grows well in low rainfall, and in the heavy clays of the great basalt plain that extends from the outskirts of Melbourne to beyond the South Australian border. Read more: National parks are vital for protecting Australia's endangered plants This is a great fillip to the garden, as it requires little irrigation and has the added advantage of telling you when it needs water. When the plant is dry its leaves, which are usually open and in full display, noticeably close up. This is the time to give it a good drink. In tougher environments where it is windy, frosty or very sunny, black wattle can be planted as a quick-growing tree among which other slower-growing and more sensitive species can be planted. The black wattle provides protection for these other tree species, and as it ages and starts to collapse (often at around 15 years) the other trees emerge and take over. As for all acacias, black wattle is a nitrogen-fixing plant. This means its roots have bacteria that allow it to take nitrogen from the atmosphere and incorporate it into the plant’s structure, which also benefits the surrounding soil. This can be a real advantage to those establishing a garden in poorer soils or heavy clays. Read more: The Lord Howe screw pine is a self-watering island giant The black wattle can also provide excellent natural mulch both in large-scale revegetation projects and domestic gardens. The mulch forms from the leaves and bark as they are shed, but also from the twigs and branches as the plant dies. In the right parts of Australia, where it grows naturally, the black wattle is a valuable plant for revegetation work and an asset in the garden.