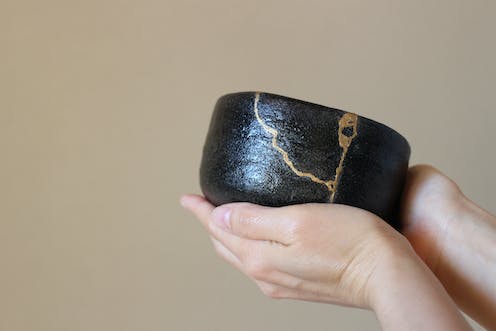 Collingwood coach Nathan Buckley recently revealed that he’d embraced the Japanese art of kintsugi in coaching a team that few predicted would make the AFL Grand Final at the start of the year.

Even though the result didn’t work out as he would have hoped – his team lost to the West Coast Eagles – Buckley said kintsugi can help the team grow from the defeat. He said:

Kintsugi is a Japanese practice of repairing broken ceramics or pottery with lacquer, often coloured with gold. Rather than discarding the broken vase, it is repaired and given a new lease on life by proudly and beautifully wearing the scars of being once broken.

Read more: A history of sporting lingo: a linguistic 'shirtfronting' for lovers and haters of sports alike

It is a powerful metaphor that hardship does not mean failure or the end of the road, but an opportunity to bounce back, potentially better than before. Lessons about the importance of failure, and that our failures can lead to our greatest success, can be challenging to acknowledge, especially as they occur.

But through the related Buddhist notion of non-attachment, we can openly accept and embrace those lessons. Non-attachment is about not “clinging to” or being fixated on ideas, objects, relationships or experiences that are seen as desirable, or “pushing away” those that are undesirable.

This is important, because whether you like it or not, every aspect of your life will inevitably change. Every relationship you have will end, whether by growing apart or by death.

Your career will one day end, either through planned retirement or by other means. The new car that was once shiny and impressive gradually becomes just another car, sporting faded paint and the battle scars of runaway shopping trolleys. All things in life will change.

How things really are

If we go through life clinging to the hope or belief that our relationships will stay the same, that our possessions won’t break or degrade over time, and that people won’t get sick and die, we are living a life fixated on our mental representations of how we want things to be, rather than how they really are.

According to Buddhist philosophy, it is these mental representations, or attachments, that increase our potential for suffering - stress, anxiety and negative emotions – as we struggle to deal with this inevitable change.

At a deeper level, by relinquishing our attachments and coming to realise that everything, even our concept of who we are, is just a series of mental representations and ideas that come and go, we realise that there is not even a static unchanging “self” to build up or defend.

Research has shown non-attachment to be a balanced approach to life associated with greater well-being; flourishing in life; self-compassion; reduced symptoms of anxiety and depression; and greater empathy, kindness, and helpfulness towards others.

Kintsugi can be viewed as a visual metaphor of non-attachment insofar as there is no singular form or appearance that a piece of pottery must take or retain. It is through embracing the ever-changing flux and possibility present in all things that we can openly experience what they have to offer.

With this realisation we can reduce the stress and negativity that often accompanies failure, being wrong, making mistakes, or losing a Grand Final. These are not necessarily situations that reflect poorly on us as a person or indicate that future improvement and success is unachievable.

This type of radical acceptance and openness can make it easier to be more adaptable and to consider alternative approaches and strategies that can help future success.

So how does this all relate to sport, where the focus is about winning?

In a team setting, this may even require the realisation that personal goals need to be set aside in pursuit of team success.

Losing a Grand Final should not be viewed as an outcome that forever brands the “self” as a loser, or seen as evidence that it is impossible to succeed in the future.

Read more: Stay alive, and if something moves, shoot it: one year of phenomenal success for Fortnite

By fixating on these beliefs someone may miss out on the opportunity to identify the positives that could lead to future success. Alternatively, not reflecting on the experience so as to avoid negative emotions or feelings of inadequacy may also result in missing out on opportunities for growth.

Instead, through non-attachment the experience should be embraced and accepted, with the knowledge that one’s “self” will only be enhanced rather than diminished by the experience.

In other words, while the vase may be broken now (or the team lost this season’s Grand Final), there is nothing to be gained by leaving it be or discarding it entirely. With the art of kintsugi, if the vase can return better than before, then why not Collingwood’s hope for success next season too?