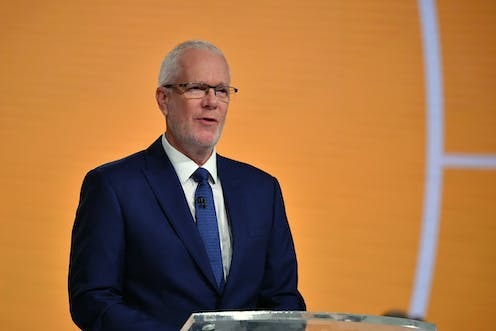 Update: Justin Milne has now resigned as chair of the ABC board.

Behind the extraordinary events engulfing the national broadcaster lies a rather ordinary and clear statement of principle enshrined in the ABC Act. It clearly stipulates that one of the functions of the board is to maintain the corporation’s independence and integrity.

Has Justin Milne, as chairman of the board, done that?

Reports from Fairfax Media this week revealed email correspondence between Milne and the then managing director, Michelle Guthrie. In the emails, Milne called for chief economics correspondent Emma Alberici to be sacked over a report on government funding for research and innovation.

Then Prime Minister Malcolm Turnbull had complained about the article; this followed complaints in February about two other pieces by Alberici on corporate tax, also critical of government policy. The ABC amended and reposted one of these pieces and eight days later republished the other, an analysis.

An internal ABC review found fault with both earlier articles, which had attracted considerable attention.

Another report this week in The Daily Telegraph makes further claims that Milne later demanded the resignation of ABC political editor Andrew Probyn, following anger from Turnbull. “You have to shoot him”, Milne is claimed to have said to Guthrie.

Read more: ABC Board Chair over-reaches in a bid to appease hostile government

On one view, the performance of a journalist is an operational matter for the MD or other executives, not a strategic matter, and there was no cause for intervention by Milne.

But others might ask, isn’t it the role of the board to intervene if there’s possibly severe reputational damage to the organisation and executives are not acting?

Both points seem reasonable, but this is the ABC, not a commercial operation.

It’s hardly contentious to say that its journalistic role distinguishes a news organisations from other businesses. Watchdog, fourth estate – however we describe it – news media are different. Editorial independence, along with editorial standards, is important.

But this is even more pronounced for public broadcasters. While government funds the ABC and SBS using public money, these are not state broadcasters. Being free from state control is a part of the legislation under which the ABC operates. It’s when we look at the ABC Act that we see the problem for Milne.

Although we often speak of the ABC “charter”, this is really just section 6 of the ABC Act. It sets out the functions of the ABC and it’s where we find reference to the ABC providing “innovative and comprehensive broadcasting services of a high standard”.

But important obligations are found elsewhere. The requirement to provide a news service, for example, is in a later, operational section.

And it’s section 8 where we find the twin requirements of independence and editorial standards. These are worth setting out in full:

The problem for Milne is that these obligations are not imposed on the ABC as an organisation. They are imposed on the board. The lead-in to section 8 is: “It is the duty of the Board…”

Returning then to the emails, at issue was a report by Alberici on the main 7pm television news bulletin on May 6. According to the Fairfax report, Turnbull sent an email to news director Gaven Morris the next day complaining about the report.

Morris sent it to Guthrie, who contacted Milne. Milne responded, saying “they [the government] hate her” and “get rid of her”.

This apparently is before Communications Minister Mitch Fifield complained about the same report on May 9 and before the ABC’s complaints review unit had a chance to assess the complaint. When it did, it found no problem with the article except for one inaccuracy – certainly nothing that would justify the dismissal of the journalist.

It appears Milne acted to protect the reputation of the ABC. He and the board are required to do that – protecting its “integrity” is a part of their statutory duties. And the board also has a role in upholding standards.

Had the ABC’s complaints unit found there was a serious problem for a second time and executives had failed to act, maybe the board would have been right to intervene. But that step – assessing the validity of the complaint – was skipped, and it seems the main reason for proposing Alberici’s dismissal was to appease the government.

In this case, “independence” should have trumped the reputational aspect of “integrity”, especially when the risk was political. Instead, the chairman of the ABC may have compromised both values.