Sometimes, in rainforest research, the only way to go is up. Twenty years ago I chose the rare rainforest tree Idiospermum australiense as a research subject for my Master’s degree, and some months into the project I discovered it only produces flowers high in the canopy.

Read more: The mysterious Pilostyles is a plant within a plant

So, after a short course in single-rope technique, I found myself dangling 15 metres up in the rainforest canopy, surrounded by its sweetly fragrant, rose-like flowers. I followed the flowering process over a 24-hour period, taking photographs and catching potential pollinators. The tree is known locally as the “idiot fruit” (a loose translation of its scientific name) and there was I, dangling on a thin rope in its canopy, watching tiny insects. Oh, the irony. 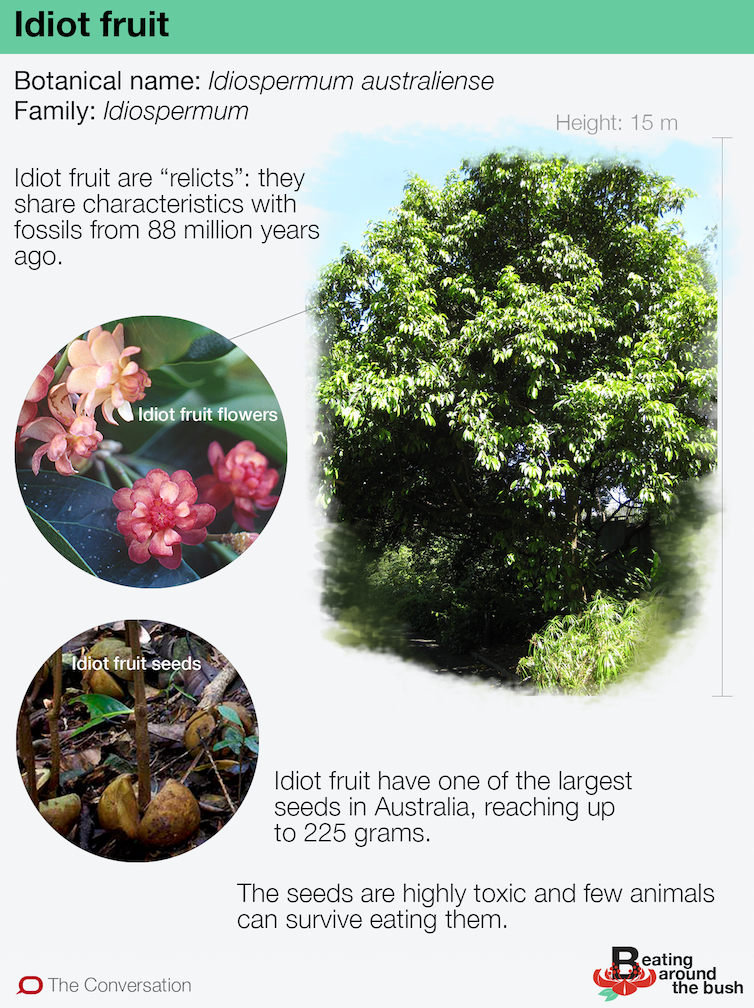 The Conversation, CC BY Intricate floral movements Idiospermum australiense (also known as “ribbonwood”, or the “dinosaur tree”) makes for a fascinating and relatively approachable study subject. It is rare, with scattered populations covering a total of just 23 km². Known populations are mostly close to roads in very wet lowland tropical rainforests of Far North Queensland’s wet tropics. Read more: Wollemi pines are dinosaur trees My research sites were idyllic locations close to crystal clear streams, and the tedium of solo field work would occasionally be broken by the wollock-a-woo call of the colourful wompoo pigeon or a wandering curious cassowary. The hours of observations high in the forest canopy revealed an intricate process of floral movements that allow the plant to control their insect pollinators and prevent self-pollination. The flowers of Idiospermum start as small spherical buds. Over a period of two days, the numerous cream-coloured, petal-like structures (called “tepals”) unfurl. They emit a fragrance that is sweet and fruity, and attract large numbers of small beetles and thrips (minute insects with fringed wings). At the centre of the flower, the stamens are covered by a ring of hard rigid tepals, and the stigma – the female part of the flower – is accessible to pollinators via an open crater. But on the third day, things start to change. The stamens move and block the crater, while the ring of hard rigid tepals lifts and the stamens release their pollen. Pollinators can now feast on a reward of messy, sticky pollen, but are prevented from moving that pollen onto the flower’s stigma, thus preventing self-pollination. Fertilisation only occurs if a pollen-covered insect enters the central crater in a newly opened flower elsewhere. Meanwhile, the ageing flowers start to change colour, first to a pale pink, then slowly deepening to crimson. If pollination has occurred, the flower will develop into a fruit containing one, rarely two, seeds. 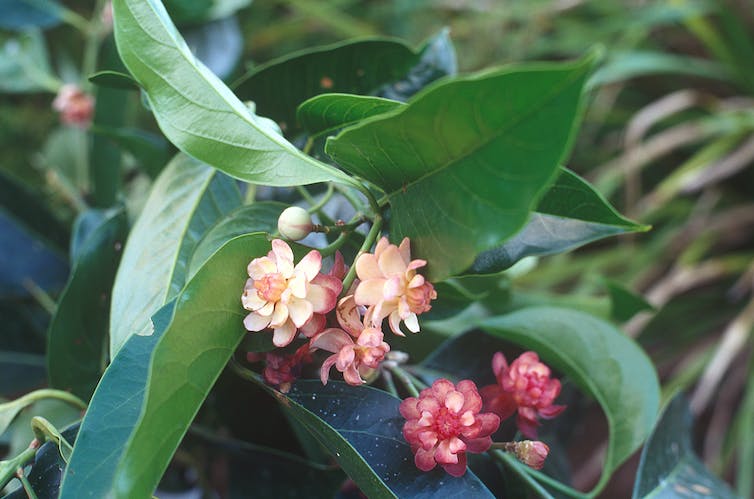 The rose-like flowers of Idiospermum are cream-coloured when they first open, and fade to a deep crimson red over their 10-14 day life. Wet Tropics Management Authority The seeds themselves are remarkable. At up to 225 grams, they are probably the largest seed produced by any Australian plant (apart from the coconut). Unlike other rainforest plants with large fruits, they are not dispersed by cassowaries. In fact, these enormous seeds have no known disperser: instead, they fall and germinate where they come to rest. The starchy reserves and protective poisons contained in the seed give the young seedling a great start in the dark and dangerous environment of the forest floor. But arguably, these seeds are the reason for the tree’s rarity. Their lack of a disperser, and reliance on a humid environment to prevent potentially fatal desiccation, may be the reason why their distribution is so restricted. Refugees from deep time Idiospermum occurs in just three widely separated populations, one in the Daintree, and two others 150km to the south, in the foothills of Queensland’s two highest mountains. They grow in “environmental refugia”: habitats, usually close to rain-attracting mountains, that have remained climatically stable for millions of years while the remainder of the continent has dried out. These refuges provide a safe and stable habitat for an extraordinary diversity of plants found nowhere else, including many that have been described as “primitive”. “Primitive species” are modern species whose lineage branched off at a very early stage in the evolution of flowering plants, and who have retained primitive anatomical and genetic features that are similar to those seen in fossils of ancestral flowering plants. The concentration of ancient flowering plant lineages within Queensland’s wet tropics makes the region internationally significant. With some 15 of the world’s 27 ancient plant families occurring within its 2 million hectares, it can be considered a living museum showcasing the evolution of the flowering plants. 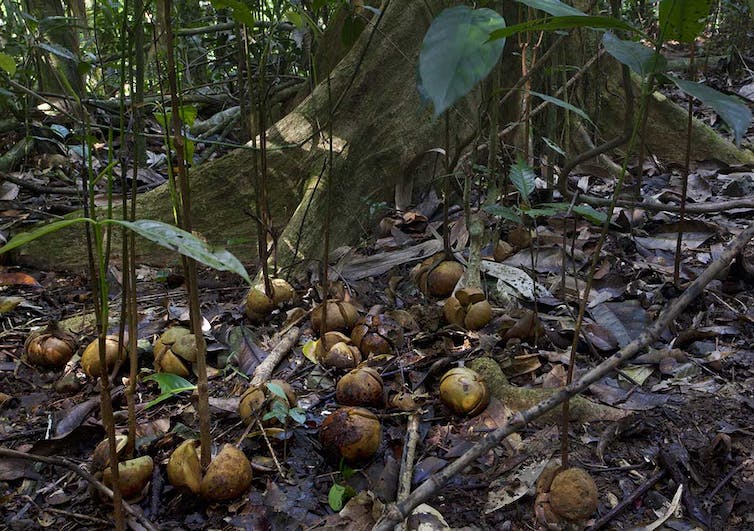 The massive seeds, weighing up to 225 g, are probably the largest of any Australian plant (apart from the coconut). Photo Neil Hewitt, Cooper Creek Wilderness, Daintree Rainforest. Among the flora of the wet tropics, Idiospermum is truly iconic. It is the only member of its family (the Calycanthaceae) in the southern hemisphere: its closest relatives grow in China and North America. Its attractive, fragrant flowers retain a set of features seen in fossils some 88 million years old. Read more: The Lord Howe screw pine is a self-watering island giant It occurs in beautiful lowland rainforest locations, where it can often be easily found due to the scattering of seeds around its base. Idiospermum provides a focus for the region’s flora – its beauty, its rarity, its relictual nature, and its significance on a world scale.