The new Higher School Certificate (HSC) physics syllabus for NSW will contain no mention of the contributions of female physicists to the field. Not teaching students about their contributions to the field denies young women role models, and denies all students important knowledge about physics.

An education system which simultaneously claims to praise women in STEM, yet erases them from a physics syllabus cannot be seen as thorough. This needs to be fixed before long lasting damage is done to Australia’s next generation of scientists.

Physics has a multitude of female physicists to celebrate. These outstanding women could inspire passion in young female students, while providing all students with a broader perspective of the universe we all call home.

In 2018, NSW introduced a new HSC physics syllabus, which focuses on complex topics such as thermodynamics and quantum physics, and requires a more technical understanding of physics concepts. It focuses on the physics itself and its modern usage, rather than how we discovered and developed physics in the first place.

The outgoing syllabus includes more background and the history of the development of physics. The discoveries women have contributed to the field are taught in this syllabus, but it fails to identify a single woman by name in the 47 scientists mentioned 93 times.

The new syllabus has 25 scientists mentioned 56 times. But no women are referred to by name, nor are any contributions women have made to physics included.

This new syllabus focuses completely on male physicists and their work. Women have been and continue to be told physics is primarily a male endeavour.

You can’t be what you can’t see

Science is filled with interesting characters, insights and discoveries. Teaching about a scientist or their work celebrates their contributions, highlights their efforts and recognises how they influenced and developed knowledge.

The new syllabus fails to provide female role models. Role models are important because they foster pro-science aspirations and attitudes. This is true for both women and men, but young girls miss out if we only provide students with male role models.

Read more: The hunt for the Superstars of STEM to engage more women in science

This syllabus conveys the message that female physicists aren’t significant enough to mention. This is not only incorrect, but discouraging to female students. When we focus entirely on male scientists, we devalue women and their work in this field.

There are many examples of outstanding women that could have been included in the syllabus. Each have made major contributions to their field. Students would benefit greatly from learning about these women (plus many others) and their work in physics lessons. Here are four examples of bad-arse female physicists: 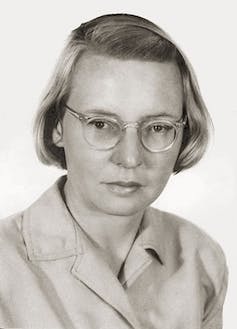 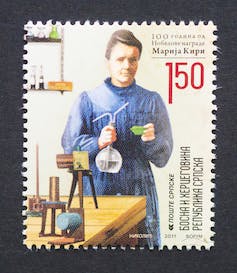 Marie Curie is one of the most well-known female physicists. from www.shutterstock.com

Dual Nobel laureate, Professor Marie Curie started the field of radioactivity. Her work included the discovery of two new radioactive elements, which was only possible because of her impeccable experimental skills. Her research of radioactivity is still influencing physics. Her notebooks are still radioactive and will likely be for the next 1,500 years.

Dr Rosalind Franklin’s unique approach to X-Ray crystallography was the first successful research delving into the structure of our cells. This helped us understand the double helix structure of DNA. Her work was revolutionary but has been attributed to Watson and Crick, who won the Nobel Prize for the discovery. 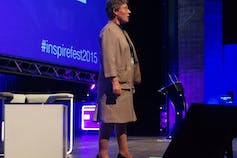 Dame Professor Jocelyn Bell-Burnell discovered an entirely new type of star called pulsars on a radio telescope she essentially made herself while she was a PhD student. These rapidly rotating neutron stars changed what astronomers thought possible and is still an active area of research. Bell-Burnell originally called them LGM for Little Green Men as she did not want to rule out the fact the source could have come from alien life forms.

Teaching our students women have had and continue to have no role in physics is not only incorrect, it’s harmful. We need equal representation to normalise women in physics and encourage their engagement and further study. A syllabus that correctly represents people in the field of physics can help reduce unconscious bias and demonstrate to young women there’s a place for them in this field.