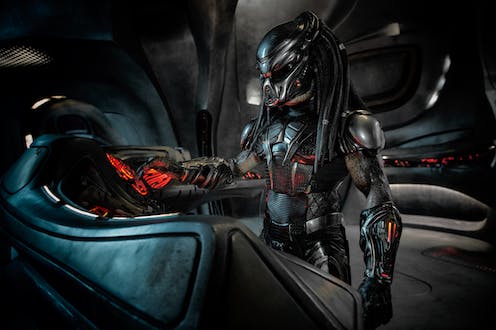 A prettier predator we have not seen.20th Century Fox / Davis Entertainment

The Predator blasts into cinemas today. While newcomers will enjoy the ride, there are some sly references for those lifelong fans who have watched all the way back to 1987’s original Predator film, and the sequel and crossover films since then.

The Predator blasts into cinemas today. While newcomers will enjoy the ride, there are some sly references for those lifelong fans who have watched all the way back to 1987’s original Predator film, and the sequel and crossover films since then.

This is a modern-day Predator film, shiny and slick and updated – with even the mention of climate change as a plot point.

I’m glad there’s a chopper to get to in this film.

But how does the science of new evolved predators stack up? Some spoilers and slightly macabre calculations follow.

Read more: The Meg! When the (giant prehistoric) shark bites, the science bites back

We see some interesting details on the invisibility cloaking technology of the predators.

Their ship appears to have an external physical field that wraps around the outside of its normal exterior. Personal cloaks appear to vary from being completely invisible to slightly visible, shimmering transparent patterns in the air.

While some progress has been made, most current invisibility experiments have only worked on tiny micrometre-scale objects, and only for certain wavelengths.

For larger objects, most techniques reflect incident light back, which obscures the object but doesn’t show the viewer what is behind it – unlike in the movie.

“See-through” trucks are currently being developed that use forward-looking cameras and rear displays to show cars what’s in front.

The main challenge with achieving invisibility using this technique is multiple viewers, which was nicely highlighted in the film Mission Impossible: Ghost Protocol. While it’s possible to simulate the background behind the invisible person for one viewer, it becomes progressively more complex to simultaneously simulate multiple backgrounds for multiple viewers at different locations.

One piece of current human technology suggests a possible solution: new OLED TV monitors with extremely fast refresh rates. Multiple viewers wearing 3D glasses can watch different shows at the same time on the same TV. Perhaps some future technology will enable this effect without the need for glasses.

Verdict: Some slight stretching of science.

Will someone please tie up that monster properly

People doing a shoddy job of restraining monsters is one of the most frequently used “stupidity drives the plot” elements of movies. This movie is no different, with a supposedly sedated (because these brilliant scientists know the exact dose for the animal, of course) predator held down by some dubiously thin restraints.

The wire rope appear to have a diameter of about 6mm, suggesting a breaking strength of about 24.4kN, equivalent to a load of about 2,500kg.

But the “safe load” given for that diameter is only 4.89kN (498kg static load), to allow for factors like dynamic loading: something the escaping predator would definitely be applying.

Given that the predator is shown to be able to smash deep dents in solid steel tables and squash cars, it seems unlikely that this cabling (even allowing for the three cables in some places) provides a sufficient safety margin for restraining an angry predator.

Depictions of autism and memory

The son of the main character is presented as being on the autism spectrum. In one character-establishing scene, he correctly sets the pieces back on at least six in-progress chess games from memory after two bullies sweep the pieces onto the floor.

Top chess players have reported they can remember thousands of games. So it’s plausible that a good chess player could remember the configuration of six boards: it’s implied that he is a good player by his watching of other games. 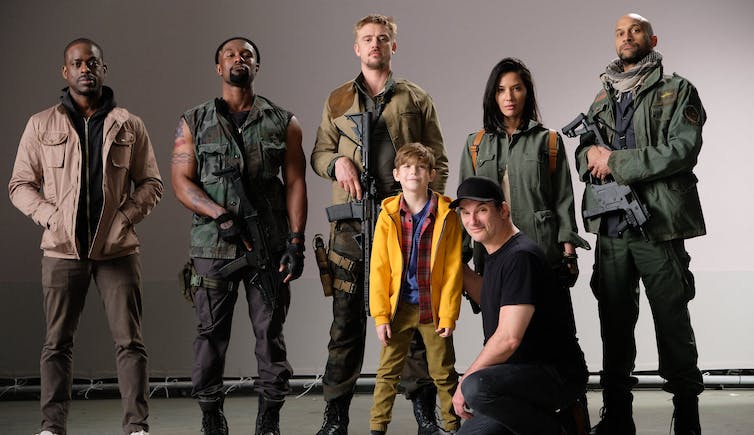 Special interests are also a key characteristic of autism. It’s plausible that he has developed a special interest in chess (it’s portrayed that he’s part of a chess club), and that level of attention has resulted in him being able to reconstruct the board configurations.

Spoiler alert! I got you, you got me

In the climactic final battle, two mortally injured best buddy soldiers decide to go out on their own terms and shoot each other simultaneously from a range of about ten metres. 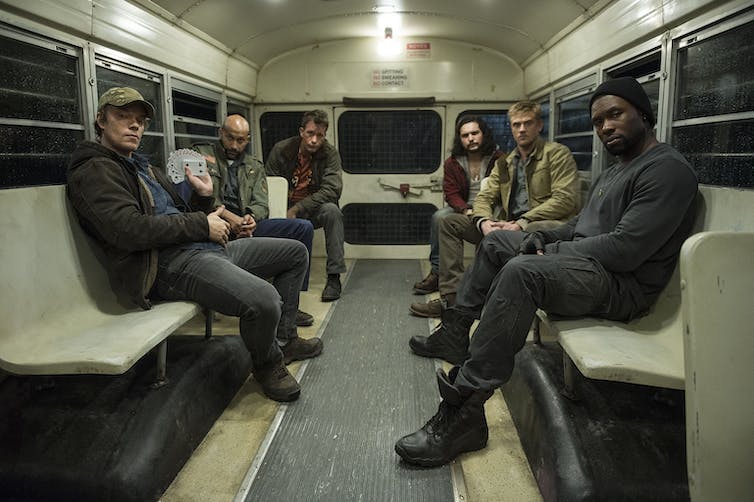 On first impressions, this doesn’t seem possible because the minimum human reaction speed is no better than 100 miliseconds, during which time a handgun bullet travelling at a speed of around 300 metres per second would move 30 metres, more than the distance between them (much faster than the blasters in Star Wars)

Read more: When AI meets your shopping experience it knows what you buy – and what you ought to buy

But this act of bravado is co-ordinated: one buddy isn’t waiting for the other but rather they pull the triggers at the same time. If cued off a shared wink, head nod or other visual cue, they would only need to get the delay after that consistent, still difficult but not impossible.

The Predator is surprisingly fun. It has its ups and downs but there’s some great humour and an entertaining cast that on the whole works well together.

Most of the science – if you allow the overall premise of a super alien species that trawls the galaxy for hunting challenges – holds up reasonably well, with a few exceptions that I think we can allow for the purpose of plot progression.

Most importantly, in a nod to the 1987 film, it’s good to see the characters don’t forget to get to the chopper.

Dr Kate Sofronoff, Associate Professor in the School of Psychology at the University of Queensland, was consulted for advice on autism as part of this article.