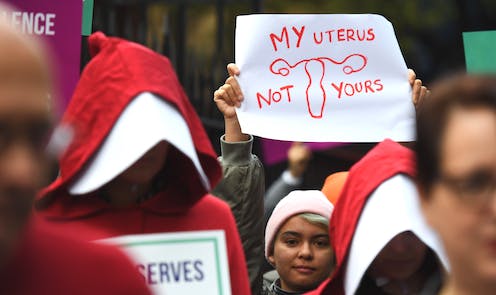 Abortion is common, safe, and the only criminalised listed medical procedure in Australia due to an archaic, flawed piece of legislation inherited from Victorian England.

Despite campaigns to decriminalise abortion, progress has been slow, and patchy across states. Here’s where each state is up to.

The ACT is the only Australian jurisdiction to completely remove abortion from criminal law. Medical practitioners can perform abortions at approved facilities.

The health minister can establish safe access zones around abortion clinics, where interfering with a person attending the clinic or causing them distress is prohibited.

The parliament is set to debate a bill that would allow women to access abortion via telemedicine, nurse practitioners, or their GP.

Read more: Explainer: what are abortion clinic safe-access zones and where do they exist in Australia?

In 2017, a woman who had experienced reproductive coercion was convicted of attempting to procure a miscarriage.

In 2017, the NSW Coalition government unanimously voted against decriminalising abortion. Safe access zones were established in June 2018. The Greens continue to campaign for law repeal.

Read more: How forced pregnancies and abortions deny women control over their own bodies

Ministerially approved medical practitioners can perform abortions to preserve a woman’s life before 14 weeks gestation on physical, psychological or social grounds and between 14 and 23 weeks with another doctor’s approval in the NT.

The legality of abortions performed after 23 weeks is uncertain. Doctors with a conscientious objection to abortion must refer patients to a doctor with no such objection. Safe access zones are established in the NT.

The attorney general has promised to review the abortion laws.

Abortion is a crime punishable by up to ten years’ imprisonment in Queensland. Case law permits medical practitioners to perform abortions “in exceptional cases” on physical and mental health grounds.

In 2010, a Cairns couple was tried and acquitted of procuring an abortion. In April 2018, a suicidal 12-year-old sought permission from the Supreme Court to obtain an abortion. The lack of surgical abortion facilities in far north Queensland has seen women fly interstate for abortions or even perform self-administered abortion.

Parliament will debate the Termination of Pregnancy Bill 2018 in October. This bill follows the Queensland Law Reform Commission’s recommendations and allows abortion on request to 22 weeks and thereafter in emergencies or when two doctors deem it necessary on physical, psychological or social grounds.

There are provisions for conscientious objection and safe access zones. Abortions performed by unqualified persons would remain unlawful.

Abortion remains a crime punishable by up to life imprisonment in SA. A 1969 statutory amendment allows abortion when:

After two years of community engagement, the South Australian Abortion Action Coalition began its formal campaign in August 2018 by sending letters to each state MP calling on them to take action to repeal abortion laws.

In Tasmania medical practitioners can perform abortions with a woman’s consent up to 16 weeks, and thereafter when two doctors deem it necessary on physical or mental health grounds. There are provisions for conscientious objection and safe access zones.

The state’s last abortion clinic closed in December 2017, forcing women requiring surgical abortions to travel interstate. The Liberal government is working with a private provider to deliver low-cost surgical procedures to women in Hobart from October.

It remains a crime for an unqualified person to perform an abortion. There is a conscientious objection clause. Safe access zones were established in 2015.

An anti-abortionist has brought an appeal against her conviction for breaching safe access zones to the High Court on grounds that the legislation infringes on her freedom of political communication. A similar challenge has been brought in Tasmania.

Abortion is unlawful unless performed before 20 weeks’ gestation by a medical practitioner who has obtained a woman’s informed consent or determines the abortion necessary on physical, mental, social, personal or familial grounds.

After 20 weeks, two medical doctors from a ministerially appointed panel of at least six must agree the pregnant woman or foetus has a severe medical condition. A parent must be notified of abortions performed on those under 16 years of age.

Read more: FactCheck: do women in Tasmania have access to safe abortions?

Australian laws obstruct access to abortion. Gestational limits, which are generally interpreted conservatively, often make second and third trimester abortions accessible solely to those who can afford to travel interstate or overseas.

South Australians cannot access medical abortion via telehealth or their GPs and must travel to Adelaide or a handful of regional centres.

Abortion remains a doctor’s choice in several jurisdictions. Abortions are generally costly, and one in three women find it difficult or very difficult to finance them. Law repeal is therefore one of many changes necessary to ensure better abortion access.