In the aftermath of the dramatic US Open women’s final between Serena Williams and Naomi Osaka, Herald Sun cartoonist Mark Knight sketched a cartoon of Williams that has drawn opprobrium worldwide.

Critics such as writer J.K. Rowling and basketball player Ben Simmons have denounced it as racist and sexist. However, the Herald Sun’s editor defended Knight, saying the cartoon had “nothing to do with gender or race”.

But whether Knight and his editor realise it or not, the cartoon draws on at least 200 years of racist and sexist caricaturing of African and African-descended women.

In the United States, the tradition of racist caricature began as slavery came to end. This was not a coincidence.

The first place to outlaw slavery in the newly formed United States was Vermont in 1777. Over the next 50 years, northern states abolished slavery at different rates. Then, in 1861, the nation went to war over slavery, and with the Union’s victory four years later, this dark period of the nation’s history officially came to a close.

Read more: This is bigger than Serena Williams: lessons from the 2018 US Open tennis

But wealthy whites’ desire for cheap labour did not end. In order to maintain a permanent underclass of workers, new and pernicious forms of racial classifications emerged. These were designed to keep black people “in their place,” or prevent them from becoming “uppity.”

The 19th century also saw the solidifying of now-discredited forms of science that pegged races to a so-called ladder of civilisation. White people, in this logic, had ascended to the top of the ladder. In the United States, African-descended people were at the bottom. (In Australia, white people pegged Aboriginal people to the bottom rung.)

Alongside such ideas came new ways to represent - or misrepresent - groups of people in imagery. Racist and sexist caricaturing became a staple of newspapers and pamphlets, which were circulating ever more cheaply by the decade. This was “racism’s visual vocabulary”, to use a phrase coined by American professor Martha S. Jones.

American cartoonists exaggerated the features, clothes, speech and deportment of black people. The effect, as in Edward Clay’s famed “Life in Philadelphia” series, was to suggest that African Americans would never fit into city life as free people. Such stereotypes helped undermine free black people’s claim to citizenship and to rights as fundamental as the vote. 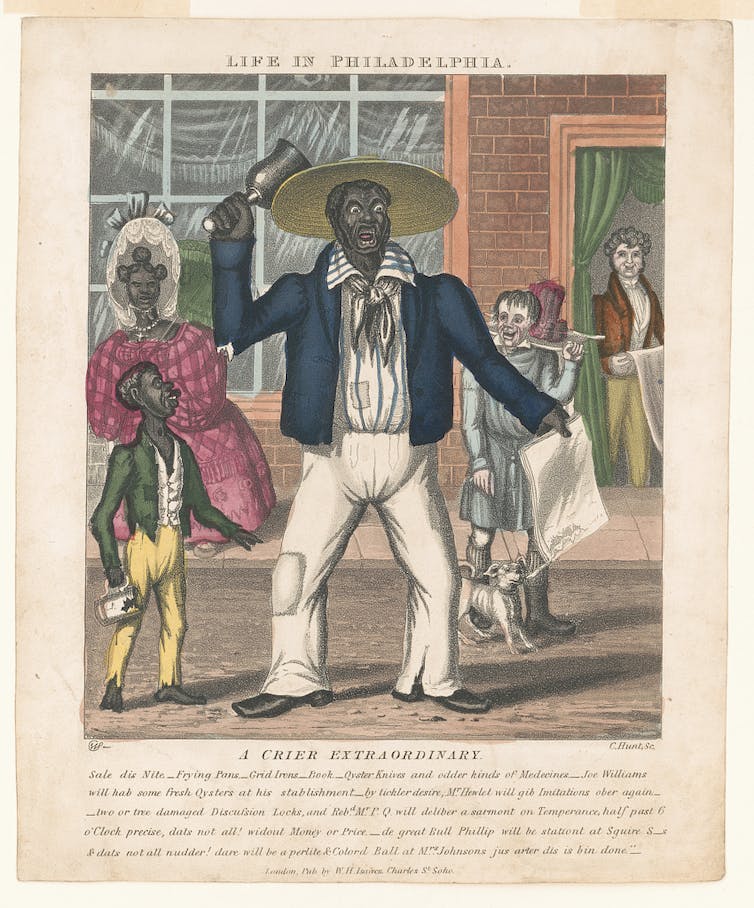 Life in Philadelphia etching. US Library of Congress

Stereotypes of black people took several forms. Zip Coon was a dandy who imperfectly mimicked modern city ways and never earned an honest dollar; the “mammy” existed only to take care of white people; harmless “uncles” or “sambos” were not very bright and good only for menial labour. 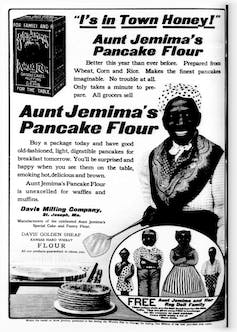 Aunt Jemima advertisement from 1909. US Library of Congress, CC BY

Damaging stereotypes of hyper-sexed black characters emerged too, including the “buck” and “Jezebel.” These served as yet another way to control black lives and labour.

Caricatures also extended beyond cartoons to what was fast becoming the most popular form of entertainment in the 19th century United States: blackface minstrelsy. Audiences across the country, and eventually all over the world (including Australia) revelled in this new comic form. Sharing a laugh by making fun of black people became one way that white Americans united with large new groups of immigrants.

The idea that African-descended people were somehow less human or less advanced also enabled white people of different classes to feel united and superior to black people. This feeling of superiority is what black intellectual and activist W. E. B. Du Bois called “a psychological wage”. It helped wealthy white people suppress alliances between poor white people and black people who had been enslaved, or their descendants.

Racist caricaturing was so useful to those in power that it by the end of the 19th century it was everywhere. Consumer goods, an ever-expanding market, were sold with images of caring Aunt Jemima and benign Uncle Ben (the latter is still on grocery shelves today, albeit with an updated image).

Such caricaturing continued to demean African Americans into the 20th century. Some of the very first short films and feature films in the United States centred on black characters who were stereotyped as lazy, thieving and/or stupid. The Jazz Singer, the first “talkie” released in 1927, featured Al Jolson in blackface singing a song called “Mammy”.

Right into my childhood in regional Australia, racial caricatures could be seen on TV’s Bugs Bunny, while more recent examples include Eddie Murphy’s donkey in Shrek (2001) and the Lion King’s hyenas (1994).

The purpose of racist caricature of African Americans is no longer to maintain a cheap workforce. It is also vital to note the ways African Americans have resisted, negotiated and minimised harm wherever possible. But such images do continue to perpetuate racist myths about black people’s natures and capabilities, with other deleterious effects. They have had a long, damaging history, and it’s time that 21st century media outlets such as the Herald Sun let them go.