In 19th century Queensland, the Native Mounted Police were responsible for “dispersing” (a euphemism for systematic killing) Aboriginal people.

This government-funded paramilitary force operated from 1849 (prior to Queensland’s separation from New South Wales) until 1904. It grew to have an expansive reach throughout the state, with camps established in strategic locations along the ever-expanding frontier, first in the southeast and then west and north. While staffed with non-Indigenous senior officers, the bulk of the force was made up of Aboriginal men and, sometimes, boys.

We have been exploring the remote Queensland outback for traces of the base camps of the Native Mounted Police. There were nearly 200 such camps. So far we have visited more than 45 of them.

Our archaeological work is revealing the day-to-day livelihoods that underpinned the chilling work of these police. This is an important part of reckoning with Australia’s colonial violence, given the difficulties in identifying physical evidence of massacres in the archaeological record, despite recent efforts to map massacre sites from oral and written sources.

Rather than maintaining order among the European population, the Native Mounted Police’s role was to protect squatters, miners and settlers on the frontier, by whatever means necessary. Their well documented method of “protection” was to mount patrols and kill Aboriginal people who were trying to protect their land, lives and loved ones. There were literally hundreds of such events. 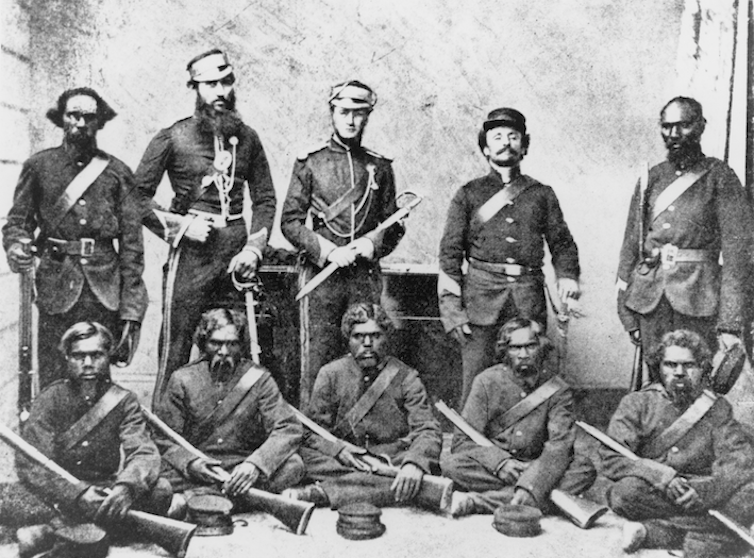 Members of the NMP photographed on 1 December 1864 at Rockhampton. In the back row from left to right are Trooper Carbine, George Murray, an unknown 2nd Lieutenant, an unknown Camp Sergeant and Corporal Michael. In the front row from left to right are Troopers Barney, Hector, Goondallie, Ballantyne and Patrick. Reproduced with permission of Queensland State Library (negative no 10686). State Library of Queensland

On February 10 1861, for instance, a detachment led by Sub-Inspector Rudolph Morisset shot at least four, possibly more, Aboriginal men on Manumbar Station (about 160 km northwest of Brisbane). This was in reprisal for Aboriginal people killing cattle on the run. We know about these particular deaths because John Mortimer, one of the station owners, complained in the local press about the police’s behaviour. He also gave evidence to an 1861 inquiry into the activities of the Native Mounted Police.

Around Christmas 1878 meanwhile, on the banks of a waterhole near Boulia, some Aboriginal people killed one or more Europeans looking after stock. The reprisal massacres of Aboriginal men, women and children that followed — with one, possibly two, survivors — are known from a written account, and from various oral accounts documented in the months and years after. The Burke River Native Mounted Police, stationed just outside Boulia, commanded by Sub-Inspector Ernest Eglinton, and assisted by at least one prominent pastoralist, Alexander Kennedy, were responsible for the Aboriginal murders.

Similar to the forts built on the plains of North America during the “Indian” Wars, or the offices of the Third Reich in Nazi Germany, Native Mounted Police camps formed the force’s administrative backbone. More than 450 non-Indigenous officers lived on these bases, along with at least 700 Aboriginal men, through the force’s 50-year history.

Like other bureaucratic systems, their very domestic ordinariness — providing insights into what the police ate, drank and how they lived — belies the conflict that took place beyond their boundaries.

Many camps were short-lived, sometimes being occupied for only a few months; in such cases their physical imprint is limited. In other situations — particularly where the terrain was rugged and higher population densities meant Aboriginal people were able to mount more effective campaigns of resistance — camps were occupied for longer periods, sometimes several decades. These left a clearer impression on the landscape.

Even so, what is left is not what you might normally associate with a frontier war. There are no battlefields, in the traditional sense of the word, to be seen. No victims with bullet wounds, no mass graves, and no large fortified buildings. Instead, the Native Mounted Police camps are ordinary, banal even, revealing the detritus of everyday life: stone fireplaces, segments of post and rail fences, sections of pathways, clearings and the occasional rubbish dump strewn with broken bottles.

Perhaps more telling, are the large numbers of bullets and spent cartridges from government-issue Snider rifles. These were rarely owned by private citizens but were issued to the Native Mounted Police for decades.

At each of the Burke River, Cluney and Boralga camps we have catalogued more than 100 bullets and cartridges, an unexpected situation given that most killings of Aboriginal people by the Native Mounted Police occurred outside the confines of the camps. Perhaps the abundance of these objects in the camps is the result of regular target practice by troopers, or maybe the result of having to hunt kangaroos at the local waterhole to supplement their meagre rations. Military-style buttons from uniforms - with ornate monograms, sometimes including a royal cipher and crown - serve as a bleak reminder that the violence associated with the Native Mounted Police was endorsed by the state. 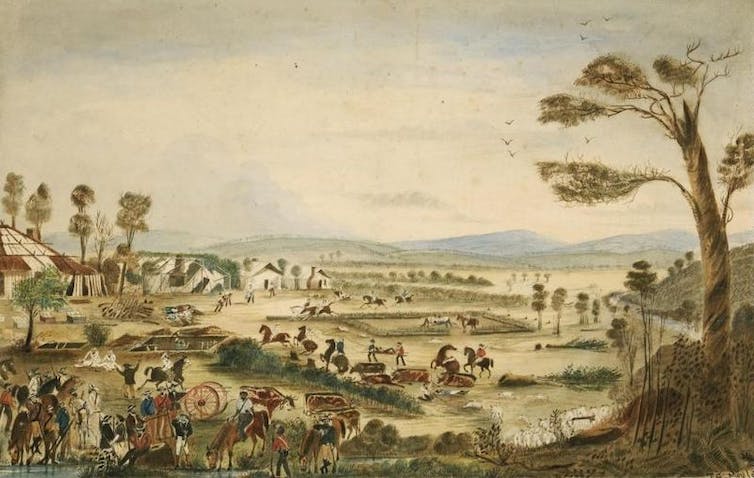 An 1861 painting of the Wills Tragedy, a pivotal moment in the Queensland frontier wars. State Library of Queensland/Wikimedia Commons

the most respectable looking native police camp I have seen in Queensland, there seems to be a place for everything and everything in its place.

This camp sits beside a waterhole that is associated with Dreaming stories - an Aboriginal stone arrangement and the thousands of flaked stone artefacts along the edge of the watercourse are testament to it being an important living and ceremonial place. The establishment of a police camp on the site was likely to have been viewed by local Aboriginal people as both inappropriate and insulting - but of course their views were not a concern.

There are two stone buildings, likely built to house equipment, guns, ammunition and dry foodstuffs, and possibly the officer’s quarters. Further away again is a series of small mounds - so slight that unless you know what to look for you would not even see them. These mounds are a treasure trove of discarded rubbish. The fish hooks, flaked glass artefacts and animal remains we have recovered from them indicate they are likely the remains of the troopers’ huts. They serve to remind us that, despite the job they were hired to carry out, they too were just men trying to survive.

Sites of colonial violence are difficult to locate exactly. As such, there is ongoing debate about its scale and nature. Aboriginal people have always referred to these events as a war. Such statements are often dismissed by critics as unreliable. Yet 19th century European authors also described the frontier killings as a war. The archaeology of Native Mounted Police camps is the closest material indication we have of the scale of suppression of Aboriginal people through the 19th century.

While some of these camps are recognised on Queensland’s Aboriginal heritage list, none can be found on the broader State Heritage Register - despite 200 sites that refer to the regular Queensland Police Force in some manner. We believe this should change to give more formal recognition to the dark past of the State’s foundations.