Road congestion is costing Australia more than an avoidable A$16 billion every year. This is set to almost double to A$30 billion by 2030. That’s why we have a new minister for cities and urban infrastructure, Alan Tudge, who says he’s looking forward to “congestion busting”.

The proposed A$50 billion underground rail link will allow commuters to travel between suburbs without having to go into the city. And transport minister Jacinta Allan said it will take 200,000 cars off major roads.

While the project’s 2050 timeline is disappointing, this is a step in the right direction. If federal, state and local governments are serious about congestion, the discussion must continue to move beyond our obsession with more roads.

Building more roads is not a long-term solution to solving congestion. Most new roads, and the temporary de-congestion they may bring, simply lure more people into their cars. Eventually congestion increases, except now with more cars on the road, further exacerbating the original problem.

Here are four alternative measures to “bust” congestion and improve our overall quality of life.

This type of transport includes electric bus rapid transit, where buses have dedicated roads and priority at intersections, and high-speed, electric underground systems, such as where passengers are transported in autonomous so-called “electric skates” that travel at over 200km/h.

These high-speed, underground electric skates are an example of the kind of public transport governments should be investing in.

Australia has been sorely lacking investment in mass, rapid public transport over recent decades. But this is slowly changing with the announcements of future projects, including: Sydney Metro, Melbourne Metro, Brisbane Metro, the recent Melbourne Suburban Rail Loop, and Brisbane Cross River Rail

But much more effort is needed to ensure these projects are implemented quickly and expanded beyond inner-city suburbs. Peak-hour bus lanes should be introduced to provide congestion-free bus rapid transit routes to and from metro stations.

And these new projects must move towards zero-emission vehicles to reduce the 1,700 premature deaths caused every year in Australia due to vehicle pollution - 40% more than in motor vehicle accidents.

The difference between public and private transport pricing in Australia is perverse. Those who own a car mainly pay a fixed upfront fee every year, no matter when or where they travel.

Ironically, the exact opposite is true for public transport users who are often charged more to travel during peak-hour traffic (see fares in Queensland, New South Wales, and South Australia), and have to pay for each individual trip, at a higher cost, the further they travel. This pricing structure effectively penalises commuters.

Read more: How many people make a good city? It's not the size that matters, but how you use it

Enabling monthly and annual public transport tickets, with unlimited trips, would encourage commuters to use public transport more often, to get the best bang for their buck from their subscription ticket.

Governments should also support integrating other transport services into these subscription tickets, including taxis, bike-sharing and even car hire. Such schemes have already been introduced overseas, including in the UK and Finland, given their potential to reduce car ownership and congestion under the right policy settings.

Investment in dedicated active transport infrastructure, such as separated lanes, is paramount for encouraging active transport. It will also ensure the safety of pedestrians and cyclists, while minimising motor vehicle conflicts.

Additionally, the arrival of electric bikes, scooters, and skateboards, has opened up other modes of transport as a viable option for more Australians. These devices are particularly important for addressing the “first and last mile transport problem”, where commuters do not use public transport because stations are too far to walk to and/or from. 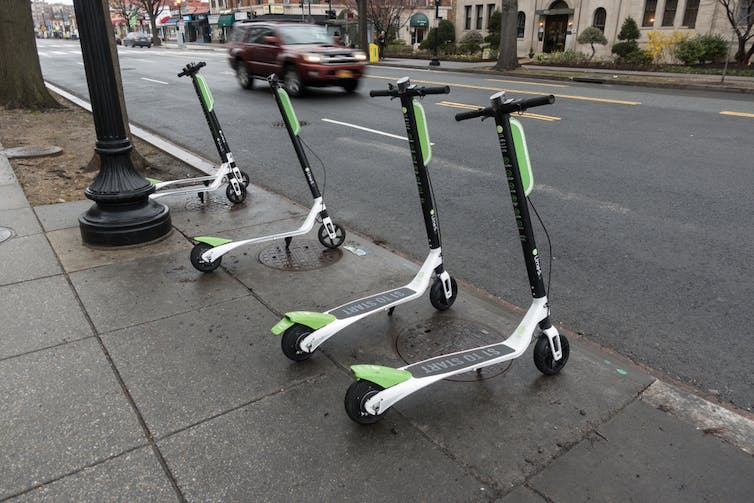 Forms of active transport, such as electric scooters (these are in Washington DC), are becoming a viable alternative in Australia. from shutterstock.com

While there are challenges with regulating some of these devices, and ensuring they are safe to use, it is important governments invest in infrastructure - such as electric bike charging at public transport stations - to support their use in addressing the first and last mile problem.

Finally, while public and active transport is crucial for reducing congestion, infrastructure to support these services comes at a cost. Most road taxes, such as annual registration fees, do not accurately reflect how and when car owners drive.

Is it fair for a pensioner who drives to the shops a couple of times a week, outside peak-hour, to pay the same fees as someone who drives to and from the city, every day, during peak-hour traffic? We need to progressively introduce cost-reflective road pricing, which is not simply focused on how far car owners drive, but on when, where and what they drive.

Road pricing should be used to disincentivise peak-hour, urban commuting to minimise congestion, while raising revenue to fund both public and active transport alternatives, as well as reduce tolls on roads that bypass city centres.

One pathway forward could be a voluntary (low-fee) road pricing scheme for electric vehicle owners. This would be in exchange for waiving existing road taxes, such as registration, stamp duty, import duty and fuel excise. Such a scheme could initially act as an incentive to encourage the uptake of this technology.

As electric vehicles become more affordable, the pricing scheme could be increased and expanded to the entire vehicle fleet, reducing emissions and travel costs, at the same time as minimising congestion.