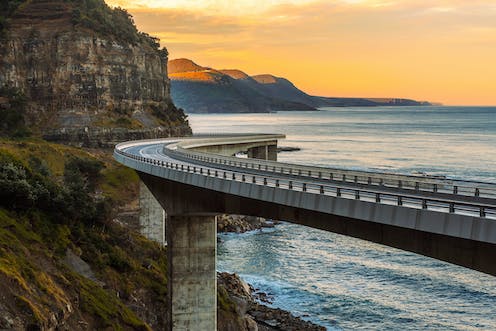 There are more than 50,000 public bridges in Australia. (The Sea Cliff bridge is one Australia's newer bridges, built in 2005).from shutterstock.com

After the tragedy in the Italian city Genoa, where a highway bridge collapsed killing more than 40 people, nations seem to be taking stock of the maintenance levels of their bridges. There are reports...

After the tragedy in the Italian city Genoa, where a highway bridge collapsed killing more than 40 people, nations seem to be taking stock of the maintenance levels of their bridges. There are reports thousands of UK bridges are at risk of collapse, and there are hundreds of similarly damaged bridges in France, Germany and Italy itself.

Australia is no different to other developed countries in this regard, where a lot of bridges are old and deteriorating, and we would be foolish to think we are immune. That said, bridges are generally safe structures, with the risk of fatality from a bridge collapse being around one in 100 million per year. This is roughly 100 times less likely than being killed by lightning.

So yes, our bridges are safe, but they need to be kept up-to-date to maintain these low statistics. So how are bridges in Australia managed, and who is responsible?

The age of Australia’s bridges

Bridges are nominally designed to last for some long period of time, such as 100 years. However, such claims are reasonably arbitrary, since much of the technology used in bridge construction hasn’t even existed for 100 years.

Accelerated deterioration testing in laboratories does help make predictions, but it’s not necessarily a good reflection of field performance. This is because of differences between naturally occurring, and artificially impressed, corrosion.

Both age and traffic volume are significant factors in the rate of deterioration of bridge surfaces. Age is likely a proxy for the combination of weather effects and the natural degradation of the material. To combat these effects, inspections and maintenance – or better yet, live monitoring – of bridges, are the best ways we have to ensure public safety. 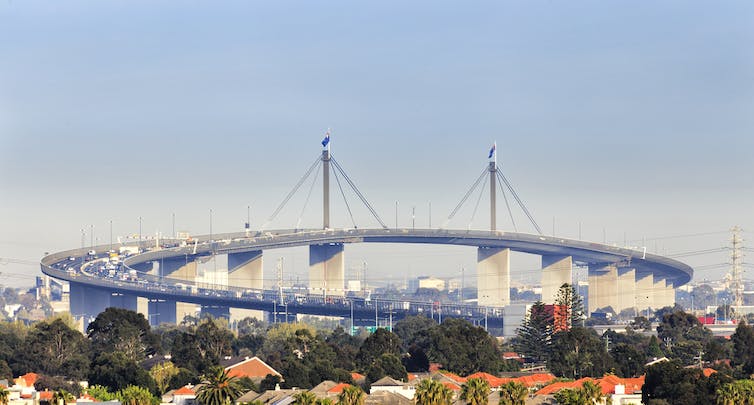 Both age and traffic volume are significant factors in the rate of deterioration of bridge surfaces. (The West Gate Bridge, in Melbourne). from shutterstock.com

Bridge safety, as with all structural engineering, is a question of whether the imparted load is less than the structure’s strength. Since loads and material strengths are variable, high estimates of loads are used, and low estimates of strengths are used. These extreme (high) loads and (low) strengths are further factored to achieve an acceptably small probability of failure when checking structural adequacy.

Highway traffic loads are known as “normal” when referring to everyday ordinary loading and “abnormal” in the case of special heavy transport. The high estimate of normal traffic loading represents a once in a 1000-year likelihood of a critical event (known as the return period). Abnormal special vehicles might be 300 or 400 tonne loads. During movements of these vehicles, no other traffic will be permitted on the bridge.

Before 1950 Australia’s road bridges were built to design standards set at state level. Around 15% of our bridges on main roads come from this era.

These load models have different weight and other aspects, so it isn’t meaningful to rely on the quoted gross weight – it strongly depends on how that load is distributed, and the other factors involved. Still, the loads bridges are designed for have increased together with legal truck weight limits, which themselves have increased by about 10% per decade since the 1950s.

So, how healthy are Australian bridges?

In Australia there are mostly three levels of bridge examination, but NSW has a fourth level. Level 1 inspections are essentially drive-bys to ensure there are no gross deformities present. This takes place roughly twice a year. Level 2 inspections are an “arms-length” visual inspection of all bridge surfaces and components and should take place around every five years at most. The scope of what is included in Level 2 inspections varies across jurisdictions. 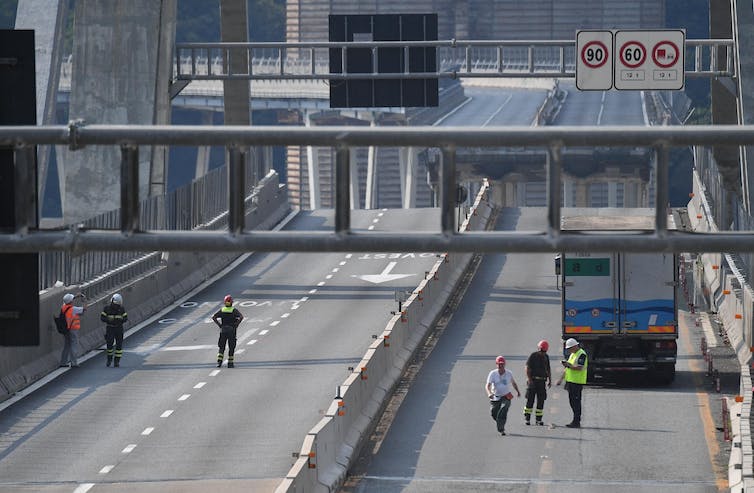 The Genoa Morandi bridge will hopefully make sure authorities around the world are more vigilant about ageing infrastructure. LUCA ZENNARO/EPA

Unfortunately, it’s difficult to give a snapshot of the current state of Australia’s bridges. The state road authorities make public very little information about bridge conditions, or inspection and maintenance budgets. In South Australia, bridge inspection results are not available, even under Freedom of Information it seems. Tasmania, the ACT, and NSW offer no data, at least from their websites.

Queensland data is available via email, but has no inspection information. Western Australia offers a GIS interface, but again no inspection data. Victoria seems to be best, offering a GIS website, which includes condition ratings (using Vicroads’ own Bridge Condition Number).

Read more: Genoa bridge collapse: maintaining these structures is a constant battle against traffic and decay

What could we do better?

An open access national bridge inventory, such as exists in the United States, would be of enormous benefit in the study and management of Australia’s bridges. For this to happen, harmonisation of inspection and maintenance routines would be necessary, along with condition rating schemes.

While the present system reflects environmental, practice, and legislative differences between the states and territories, a reasonably general national system with jurisdiction-level tuning is surely feasible.

Risk assessments should move away from subjective qualitative approaches, and adopt an objective quantitative framework. This should help minimise problems associated with loss of corporate knowledge (which contributes to collapses). Such quantitative safety data would enable budgeting for inspection and maintenance to be done on a needs basis, with clear reference to minimum acceptable levels of safety.

There are no simple answers to the complex problems bridge management throws up. The ideal combination of field inspection, expert technical knowledge, management processes, and political decision-making is hard to find. Nevertheless, the case of the Ponte Morandi in Genoa should serve as sufficient warning to be vigilant.

It might be some comfort to the families of the 43 people who died to know their loss has motivated agencies around the world to ensure foreseeable bridge failures are prevented.