A UK doctor’s medical registration has been reinstated after it was initially withdrawn when she was found guilty by a criminal court jury of gross negligence manslaughter of a young patient.

This case raises the issue of who should decide, and in what way, doctors are sanctioned for errors in the workplace. Dr Hadiza Bawa-Garba was a competent and committed doctor who made a serious mistake on one occasion in a seriously flawed hospital environment. It’s a positive message for young doctors everywhere that a person such as Dr Bawa-Garba has a road back from a tragic mistake. None of us is immune from errors. The difference for doctors is that theirs can lead to deaths.

In February 2011, Bawa-Garba was a junior doctor who was completing her fellowship in paediatrics. She’s of Nigerian descent and had graduated in medicine from Leicester University in 2003. She had returned to practice at the Leicester Royal Infirmary after 15 months of maternity leave.

Bawa-Garba was not familiar with the Children’s Assessment Unit of the Infirmary that received patients from the Accident and Emergency Department and direct referrals from GPs. Its role was to assess, diagnose and treat children, or admit them to the Paediatric Intensive Care Unit.

On 18 February 2011, six-year-old Jack Adcock was unwell. Jack had a complicated medical history, having been born with a hole in the heart and Down syndrome, he required long-term medication and he was was susceptible to coughs, colds and breathlessness. In the past he had had pneumonia.

His mother took him to the GP as he had been vomiting during the previous night and had diarrhoea. His breathing was shallow and his lips were blue. The GP referred him to the Children’s Assessment Unit where he was seen by Dr Bawa-Garba. For both it was to be a disastrous interaction. 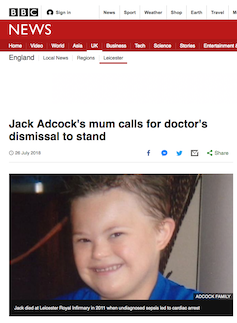 There remains tension between the sympathy for Bawa-Garba and the tragedy of what happened to Jack. Screenshot, BBC News

At about 10.45am Bawa-Garba ordered a battery of tests, including blood and blood gases and a chest x-ray, which was not undertaken until 12.01pm. She ordered Jack be given fluids (but not antibiotics) and he responded positively. She was reassured. His blood gas tests, when done a second time at 12.12pm, were better and heading back toward normal levels.

The computers at the hospital were down and the ward was busy. Bawa-Garba did not receive the chest x-ray results until 3.00pm. She had not actively chased them up. They showed it was not a case of gastro, as she had suspected, but that Jack had pneumonia. His blood test results showed he had a Group A Streptococcal infection.

She prescribed antibiotics, which were administered at 4.00pm and he was moved onto a ward. While Jack was on the ward, his mother administered his usual dose of daily medication, contrary to doctor’s orders. That probably did not help, but the dye had been cast.

At 4.30pm, Bawa-Garba spoke to the senior consultant who arrived on the ward for the routine handover. She did not urge him to examine Jack himself, so he did not do so. She also did not show him the blood gas results, but she did explain her treatment plan without raising concerns about Jack. She told him Jack had improved. She spoke to him again two hours later.

But by 7.46pm the sepsis from which Jack was suffering as a result of the pneumonia resulted in organ failure, including heart failure. Efforts were made to resuscitate him. They were confused for about a minute by a mistaken belief on the part of Bawa-Garba that Jack was subject to a not for resuscitation order. While it was a concerning error, it did not make a difference to the clinical efforts. He died at 9.20pm.

Read more: Open disclosure: why doctors should be honest about errors

The consequences for Dr Bawa-Garba

An inquest was promptly convened and expert evidence suggested the care given to Jack by both Bawa-Garba and a nurse was inadequate and complacent. But it was apparent from the outset there were many systemic issues that had contributed to what had happened.

The hospital was dependent on agency nurses, the recording of patient observations by the nurses was grossly deficient and the computer systems were not working properly on the day. Bawa-Garba was only just back from maternity leave and not familiar with the hospital’s processes, and she was tired and over-stretched, like many junior doctors. She was asked to work a lengthy, almost double shift. She was not assertive with the experienced consultant who came to the ward at handover, and he did not examine Jack himself.

Bawa-Garba was temporarily suspended, but then reinstated on the basis of her good record as a doctor. However, she was then charged with gross negligence manslaughter and found guilty by a jury. The judge sentenced her to a two year jail term suspended for two years. She appealed twice to the Court of Appeal and lost both times.

After the criminal conviction, she was suspended from practice for 12 months by the Medical Practitioners Tribunal. Controversially, the medical regulator, the General Medical Council, appealed to the High Court, which overturned the 12-month suspension and instead erased Bawa-Garba’s registration. She appealed to the Court of Appeal, which found no error by the Medical Practitioners Tribunal and reinstated the 12 month suspension. 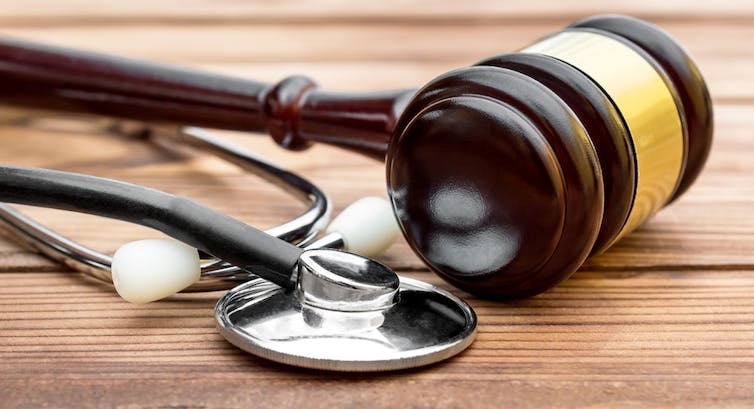 Who should deal with professional misconduct in medicine? from www.shutterstock.com

Remarkable sums of money were raised by crowd-funding within days for Dr Bawa-Garba’s appeal. There was an outpouring of empathy for Bawa-Garba from within the medical profession. Her inexperience, her ethnicity, the fact she had just returned from maternity leave, the lack of involvement by her supervising consultant, the difficulties in communicating with the pathologists and radiologists on the day, the deficits in the nursing care provided to Jack, the defective computer systems – all suggested her level of culpability was mitigated by a range of collateral considerations.

Her record was otherwise unblemished, and her commitment to the practice of good quality medicine undisputed. Add to this that rates of death for children admitted to hospital with sepsis are very high.

But there were other considerations. Jack had died in part because of deficits in the care Bawa-Garba provided. He was a very vulnerable little boy and should have been recognised to be so. He should have been treated with preventative measures adopted promptly, and close and attentive monitoring at all times. She was not blameless, and there were reasons for her conviction.

Read more: The hidden problem of medical misdiagnosis – and how to fix it

What we need to learn

As a matter of law, disciplinary sanctions are not punitive. They are imposed to protect the community, to maintain confidence in the health profession and to deter practitioners from dangerous conduct, such as culpable errors.

The ripple effects of the Bawa-Garba saga are extensive. A constructive outcome is that the spotlight is now more squarely on systemic flaws within hospitals that have the potential to escalate risks to patients.

In addition, junior doctors will be more conscious of the need to guard against complacency and be assertive in involving their consultants in difficult cases. Consultants in turn are likely to be more proactive in ensuring they have the information they need to give constructive input into supervising the care of patients.

It’s likely fewer charges of gross negligence manslaughter will be brought. It was always rare in Australia, but will be even more so now following a policy review after the High Court decision in the UK. It recommended reforms so fewer prosecutions are brought, and only when health practitioners’ conduct is “truly, exceptionally bad”.

This is a positive development as the criminal law is not an effective way to improve professional conduct.

Internationally, the emphasis of disciplinary sanctions from now on will more emphatically rest on whether a practitioner is likely to place the public at risk, rather than upon public distress after a tragic outcome of deficient medical care. That is both realistic and humane. We are all fallible. While such an approach will not satisfy Jack Adcock’s mother, sadly a harsh disciplinary sanction cannot bring Jack back, and the community is better off with Bawa-Garba back in practice.