It’s been a year since ripples in space-time from a colliding pair of dead stars tickled the gravitational wave detectors of the Advanced LIGO and Advanced Virgo facilities.

Soon after, astronomers around the world began a campaign to observe the afterglow of the collision of a binary neutron star merger in radio waves, microwaves, visible light, x-rays and more.

Read more: Explainer: what is a neutron star?

This was the dawn of multi-messenger astronomy: a new era in astronomy, where events in the universe are observed with more than just a single type of radiation. In this case, the messengers were gravitational waves and electromagnetic radiation.

What we’ve learned (so far)

From this single event, we learned an incredible amount. Last October, on the day the detection was made public, 84 scientific papers were published (or the preprints made available).

This rich science came from the fact that we were able to combine our observatories to witness this single event from multiple astronomical “windows”. The gravitational waves arrived first, followed 1.7 seconds later by gamma-rays. That is a pretty small delay, considering the waves had been travelling for 130 million years.

Over the next few weeks, visible light and radio waves began to be observed and then slowly faded.

It seemed like the news about gravitational waves was coming fast and furious, with the first detection announced in 2016, a Nobel prize in 2017, and the announcement of the binary neutron star merger just weeks after the Nobel prize.

On this first anniversary of the neutron star merger, the gravitational wave detectors are offline for upgrades. They actually went offline shortly after the detection and will come back online some time early in 2019.

The work of making gravitational wave detectors function requires extraordinary patience and dedication. These are exquisite experiments – it took more than 40 years of technological development by a community of more than a thousand scientists to get to the point of detecting the first signal.

Naturally, improving on this work is not easy. So what does it actually take?

We really do listen to gravitational waves, and our detectors act more like microphones than telescopes or cameras.

If you listen to the first ever gravitational wave signal (below) you can hear the wave-chirp itself, accompanied by a rumbling hiss (the audio is shifted to a higher frequency to make it easier to hear).

It’s a bit like if you’re standing in the kitchen and you want listen to birds singing outside, but you can’t really hear them because the dishwasher is running too loudly.

To detect gravitational waves, we need to do more than just turn off the dishwasher. We need to build the quietest, best-isolated thing on Earth.

If we could eliminate the noise in our detectors entirely, the gravitational wave chirp would sound like this (again, the audio is shifted to a higher frequency to make it easier to hear):

Unfortunately, the laws of quantum mechanics and thermodynamics both prevent us from eliminating the noise entirely. Nonetheless, we strive to do the best that these fundamental limits permit. This involves, among many other extraordinary things, hanging our mirrors on glass threads . 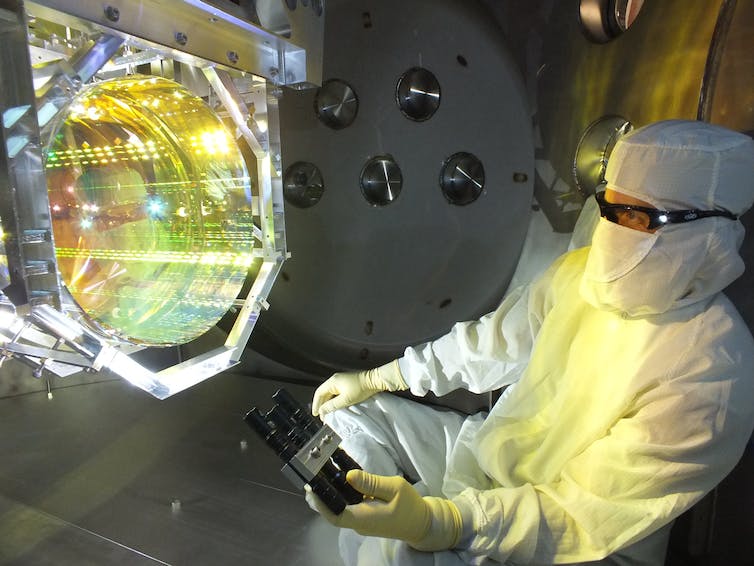 Before sealing up the chamber and pumping the vacuum system down, a LIGO optics technician inspects one of LIGO’s core optics (mirrors) by illuminating its surface with light at a glancing angle. Matt Heintze/Caltech/MIT/LIGO Lab

Our mirrors weight 40kg each and are suspended from four of these glass threads, which are less than a half-millimetre in diameter and exquisitely crafted.

Just such an explosion happened earlier this year while installing a new mirror. Fortunately, the precious mirror fell into a cradle designed for just such a possibility, and was not damaged.

Nonetheless, the delicate, intricate work of creating the glass threads, attaching them to the mirror, hanging the mirror and then installing it all needed to be redone.

Improvements to the detector

This was a heartbreaking setback for the team, but the added delay was not entirely in vain. In parallel with remaking the glass threads and rehanging the new mirror, we made some other improvements to the detector, for which we otherwise would not have had enough time.

One of the goals of this upgrade period is to install something called a quantum squeezed light source into the gravitational wave detectors.

As mentioned earlier, quantum mechanics mandates a certain minimum amount of noise in any measurement. We can’t arbitrarily reduce this quantum noise, but we can move it around and change its shape by squeezing it.

This is a bit like sweeping dust under the rug. It’s not really gone, but it might not bother you so much anymore. The quantum squeezed light source does just this.

Despite the complexity of this challenge, when the squeezed light source was activated for the first time at the LIGO detector in Livingston, Louisiana, US, in February this year there was an immediate improvement in the quantum noise: the gravitational wave detector output got just a bit quieter.

Read more: Einstein’s theory of gravity tested by a star speeding past a supermassive black hole

Much tuning remains to be done to get the detectors in optimal shape, but it is a real delight when something so complex goes well right from the start.

With these first detections, we have begun to explore the population of black holes in the universe, heard the merger of neutron stars, and probably witnessed the birth of a new black hole.

With the upgrades under way, we will study these objects with better clarity, hopefully understand where they came from, and maybe even find something completely new and unexpected.