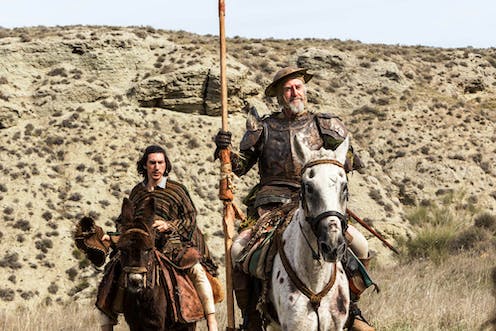 Adam Driver as Toby AKA Sancho, and Jonathan Pryce as Javier AKA Don Quixote, in The Man Who Killed Don Quixote. IMDB

“Twenty-five years in the making … and unmaking…” Terry Gilliam’s much awaited film, The Man Who Killed Don Quixote, has finally arrived.

“Twenty-five years in the making … and unmaking…” Terry Gilliam’s much awaited film, The Man Who Killed Don Quixote, has finally arrived.

Gilliam’s take on Miguel de Cervantes’ 17th-century novel had to overcome the most unlikely obstacles in various shooting attempts, including problems with funding, and health or scheduling issues for the original protagonists, Jean Rochefort and Johnny Depp. Keith Fulton and Louis Pepe’s documentaty, Lost in La Mancha (2003), was meant to be about the making of Gilliam’s film, and ended up being about the vicissitudes that made its production almost impossible.

Mirroring Gilliam’s legendary difficulties, The Man Who Killed Don Quixote presents Toby (Adam Driver) as a director literally tilting at windmills. Dealing with the problems and delays of one of his productions in Spain, Toby finds a pirate copy of his graduation project being sold illegally at a dinner party. Its title is El hombre que mató a Don Quijote - literally, “The Man Who Killed Don Quixote”. The game of metafiction characteristic of Cervantes’ masterpiece has only started.

Read more: Guide to the classics: Don Quixote, the world's first novel – and one of the best

Overwhelmed by the pressure of his boss (Stellan Skarsgård) and his boss’s wife Jacqui (Olga Kurylenko), Toby makes his own “first sally” on a motorcycle. The unexpected finding of his first film, shot in the same location ten years before, has aroused his curiosity and he decides to explore the area in search of the locals who participated in it.

In the tiny village of Los Sueños (literally, The Dreams), he speaks in Spanish to the owner of “Raul’s tapas y vinos,” until in a metacinematic move he literally elbows the subtitles off the screen. Who needed them anyway? The film continues completely in English from that moment.

A few metres from Los Sueños a sign warns him that “Don Quijote vive” (“Don Quixote lives”), and for a few euros an old woman allows him to check for himself if the sign is true. In a caravan, behind a curtain and a projection of his own film, Toby finds Javier (Jonathan Pryce), the shoemaker who had played Don Quixote ten years ago in his film. The eternal struggle between dreams and reality and the metafictional game push the story forward.

In the same way that books of chivalry inspired Alonso Quijano to become the knight Don Quixote in Cervantes’ novel, Toby’s film has transformed Javier, who has since come to believe himself to be the man from La Mancha. He recognises Toby as a companion of ancient adventures … his faithful squire Sancho. Despite Toby’s refusal, the former shoemaker is convinced that new adventures await them. And he is right. 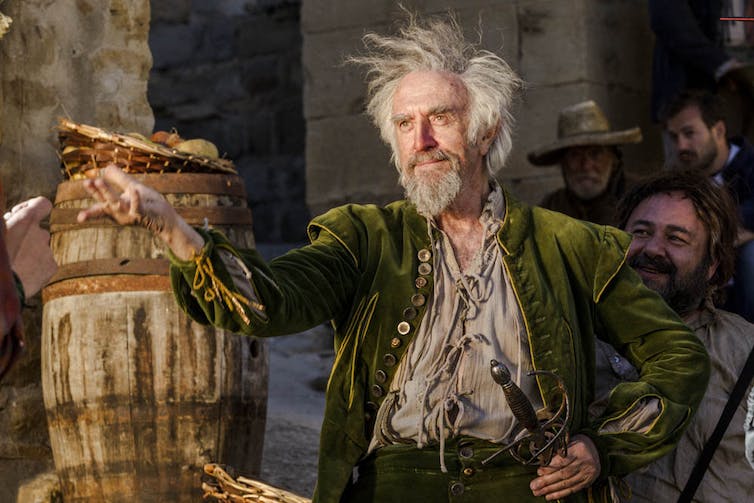 Jonathan Pryce (centre) as Javier, the shoemaker who believes himself to be the man from La Mancha. © Diego Lopez Calvin - Tornasol Films

As in the episode of the galley slaves in the novel, in which the Spanish knight errant frees several criminals and is later stoned by them, the new Don Quixote frees Toby from the hands of the Spanish Civil Guard moments after their reunion.

There are windmills and giants, flocks of sheep that are also battling armies, wineskins mistaken for ferocious giants and battles against courageous knights. The continuous exercise of discerning between what he sees and Don Quixote’s perspective makes Toby eventually confuse reality and dreams.

Suspicious of the farmers who welcome them in a rural village, yet seem to be hiding something, he discovers that they are undocumented Moroccan immigrants. While it’s the 21st century, and the Spanish Inquisition is long dead, the immigrants’ fear of the Spanish authorities suggest some old stories repeat themselves. 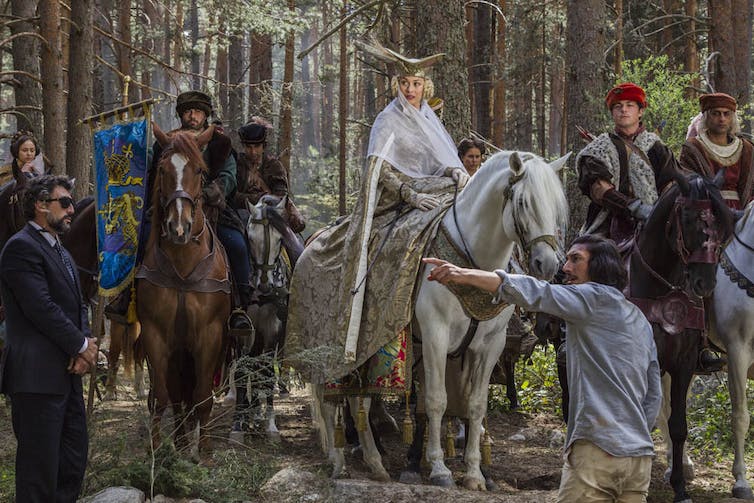 The Man Who Killed Don Quixote is the tale of a the misadventures of a film director, played by Adam Driver. IMDB

Gilliam spices up these feats with his particular sense of humour. The cruel tricks of the duke in the second part of the novel now take place in the castle of Alexei, a despotic Russian millionaire (Jordi Mollà) whom Toby’s boss wants to impress. Among a number of dramatic events that take place during one of his lavish parties, a group of bearded women who have supposedly been enchanted are mistaken for suicidal extremists. Although the Russian mogul forces subordinates to read Cervantes’ novel, clearly some of them did not make it to the second part …

Among Alexei’s “property” is Angelica (Joana Ribeiro), whom Toby met shooting his first film. Her character is a missed opportunity to show the modernity of Cervantes’ female characters.

In the novel, the shepherdess Marcela, Dorotea, or the captive Zoraida, are examples of free-thinking, independent women whose speeches written in the early-17th century still surprise the contemporary reader. In contrast, Gilliam uses the female characters as props for the hero’s story, adding to the adaptations that don’t look beyond Dulcinea, Don Quixote’s original idealised lady.

By the film’s end, Toby himself has been irremediably infected by the delusion and the chivalric obsession of righting wrongs. He now believes that he is Don Quixote, and he will continue battling giants and aiding damsels in distress.

Gilliam’s quixotic feat in finally releasing his version proves that no matter the obstacles, the character’s idealistic spirit is very much alive. “Don Quijote vive”, indeed.

The Man Who Killed Don Quixote is screening as part of the Melbourne International Film Festival.