Australian honey, produced from domesticated European honey bees mostly foraging in native vegetation, is unique. Under the microscope, most Australian honey samples can be distinguished from honey produced in other countries.

That’s the conclusion of our study, the first systematic examination of pollen contained within Australian honey.

We collaborated with two major honey retailers to survey the pollen content of a large number of unprocessed honey samples. We found that a unique mix of native flora gives Australian honey a distinctive pollen signature.

Honey is made by bees from the sugary nectar of flowers, but nectar contains large amounts of pollen. Although honey bees make separate trips to collect nectar and pollen, the pollen we find in honey was mostly introduced by being “spilled” into the nectar, either within the flower or while a bee was collecting nectar.

Typically, the honey produced from a single beehive will contain between 5 and 30 distinct types of pollen, each produced by a different plant species or group of closely related species.

Read more: Ten years after the crisis, what is happening to the world's bees?

The study of pollen in honey, known as melissopalynology, uses differences in the pollen composition of honeys to determine the geographic or botanical origins of honey samples.

Melissopalynology is widely used in Europe, but no systematic survey of the pollen content of Australian honey has ever been attempted before. Melissopalynologists put honey samples under the microscope to identify individual pollen grains, usually between 10-50 micrometres in size. We examine their shape, size, surface decoration and other morphological characteristics to determine their botanical origins. 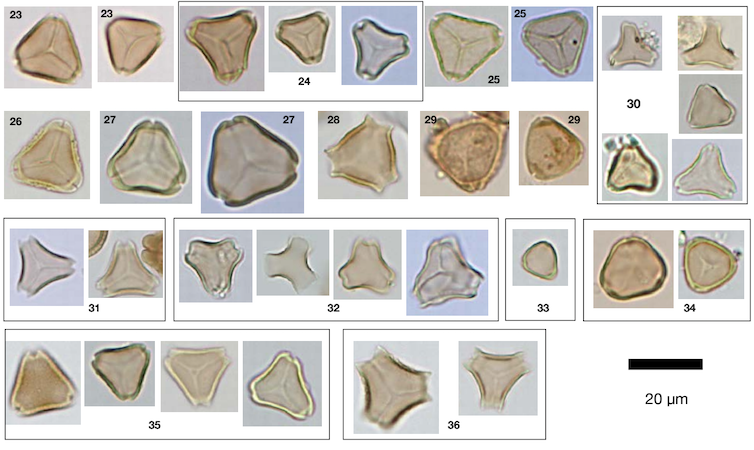 Counterfeit food is a growing threat to both consumers and producers. Australian agricultural products have a good reputation which makes them increasingly valued in countries that have experienced a range of food safety scandals for everything from eggs to infant formula.

Read more: The Manuka honey fight is one we have to have

In the light of trans-national uncertainty about food quality, Australian farmers and other food producers need better ways to authenticate the origin of our food products, including honey.

This is where melissopalynology comes in. Not only can we tell what plants (and therefore what region) the honey is from, melissopalynology can also be used to see whether honey has been diluted with grain syrups – a common counterfeiting tactic.

Most Australian honey is produced by beehives placed within or near native vegetation. In the southern and eastern parts of the continent, this is mostly forests and woodlands dominated by various species of Eucalyptus, or gum trees. So, it is not surprising that the great majority of Australian honeys contain lots of Eucalyptus pollen, and some honeys contain few other pollen types.

Read more: The farmer wants a hive: inside the world of renting bees

The 800 or so species of Eucalyptus are mostly native only to Australia (a handful of species naturally occur on islands to the north). Thus if Eucalyptus trees still grew only where they are native, it would be relatively easy to identify Australian honey based simply on the presence of Eucalyptus pollen.

However, a number of Eucalyptus species have been spread widely in other tropical and subtropical countries, where they are valuable sources of nectar. They are sometimes the dominant nectar resource for local honey bees. 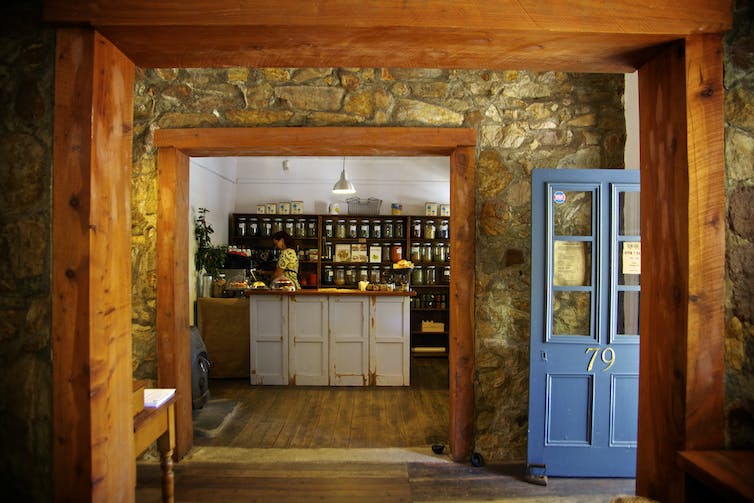 This makes sense, as many Australian Myrtaceae species are adapted to being pollinated by mammals and birds. To satisfy the energy needs of their pollinators, many of these species produce large volumes of sugar-rich nectar, which is equally attractive to honey bees.

Thus, most Australian honeys contain several distinct Myrtaceae pollen types, which does not seem to happen elsewhere – even in regions such as South America and the Mediterranean countries where honeys are routinely produced from Eucalyptus.

Read more: Bees get stressed at work too (and it might be causing colony collapse)

In southwestern Australia, one of Australia’s plant biodiversity hotspots, honeys produced from native vegetation are even more distinctive, not only containing a great diversity of Myrtaceae pollen but also typically containing many distinct pollen types within Proteaceae, the plant family that includes Banksia, Grevillea, and Macadamia.

We now know that Australian honeys reflect the rich biodiversity of our native plants. This biodiversity may provide a basis for developing a way to authenticate this characteristically Australian product.