The same could be said of a string of stories in the Australian media in recent months on violent incidents committed by “African gangs” or people of “African appearance”. The death of a 19-year-old Sudanese woman at a party in Melbourne earlier this month was linked in some reports with gang violence – something Victorian police ruled out. Even a gate-crashing incident at a teenager’s birthday party this week was deemed a news story of national importance by The Australian due to the culprits’ racial identity.

Such media coverage is, sadly, something African-Australians have been exposed to before - it seems to have popped up regularly in some form over the past ten years, at least. Before this, it was the Lebanese who were said to be forming menacing gangs, and before them, the Vietnamese and the Italians. The Australian media have a poor record in dealing with difference and diversity.

The central issue here is not that violent incidents are being covered – it’s the media’s duty to report on issues of public safety. The problem is the disproportionate amount of attention focused on the so-called African gang problem in Melbourne and the way these incidents are being discussed.

The power of labels

Among the universe of labels available to describe these crime incidents in Melbourne, the media have, predictably, fallen back on the familiar ground of racial or national identity. Seemingly unconcerned with the great diversity that defines Africa, the label “African gangs” has become lazy shorthand for anyone of African descent. One wonders whether a white person from Africa would be included under this “African gangs” umbrella.

One of the questions many migrants have is why their nationality, race and cultural background has become such a defining feature in crime coverage when the whiteness of other criminal offenders is essentially ignored and rendered invisible.

As Home Affairs Minister Peter Dutton perhaps inadvertently suggested last week when he railed against “a major law and order problem in Victoria” that wasn’t happening elsewhere, why haven’t the media blamed these incidents on “Melbourne gangs”?

Or, while we’re at it, why not call them “male gangs” or, as has sometimes been used in an attempt to include non-black offenders, “youth gangs”?

Of course, none of this would improve the media coverage of the recent Melbourne violence. These labels are just as useless in describing the complex mixture of social, cultural and economic factors behind these offences as a focus on racial identity. As the Victoria Police Assistant Commissioner Stephen Leane has said, there’s not even consensus on whether “gangs” have been involved at all.

But at least these alternative labels would carry less of the injurious baggage that racial labels do. 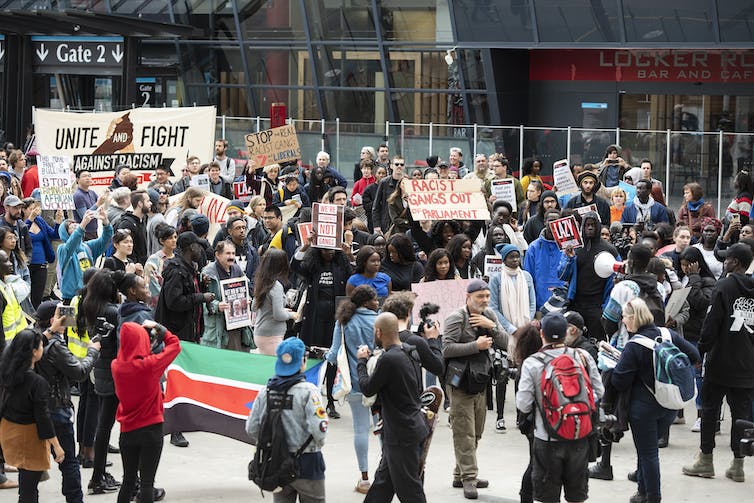 Not only do racial labels implicate all Africans in violent crime, they also keep alive that most pernicious of links between race and behaviour. If the race of offenders is the only part of their identity worth mentioning in news reports, then it stands to reason this has a causal link with their behaviour. Other complex factors that contribute to crime get ignored.

Journalists may argue that in the rush of their overworked lives, they seldom have the time to explore these types of stories in more depth. They certainly don’t have time to gather information on the offenders’ upbringing, background, education, socioeconomic status and their past experiences with violence and injustice – perceived or otherwise.

But why then consistently fall back on race and nationality? Perhaps it is something about these young offenders’ backgrounds – a source of “cultural incompatibility”, in the language of soft racism. But many of these offenders are legally Australian. Many were likely born in Australia or spent their formative years in Australia.

The damage caused by all of this is real, and the fact that politicians, including Prime Minister Malcolm Turnbull, are buying into such narratives is a point of anxiety for Australians with African heritage.

This type of bias has been shown to have negative impacts on the wellbeing and sense of belonging of African-Australians.

Indeed, some Sudanese-Australians now live in fear of racially charged attacks due to the overwhelmingly negative media coverage. As one 19-year-old African-Australian put it at a rally outside Channel 7 last weekend:

The damage that it’s doing to our community is inconceivable. I want the wider Australian community to see the pain we are going through, and understand the pain. All we want is a fair go in this society. To show who we are as people and … not lazy journalism.

Alternative voices in the media

It seems inevitable this sort of media coverage will continue - it has a long history. It is also not simply the fault of individual journalists, many of whom are hard-working, intelligent and conscientious. Rather, it is the result of far more entrenched attitudes toward race in Australia, one that involves objectified notions of racial or cultural hierarchies and a newly reinvigorated politics of fear of migrants.

As researchers at the Birmingham Centre for Contemporary Cultural in the UK pointed out 40 years ago, journalists do not sit outside their cultural and political contexts, but often reflect and reinforce them.

One way of changing the narrative is through social media, community media and ethnic minority media. Whether it be the subversion of the “African gangs” problem on Twitter, or in the media produced by people of African heritage, alternative interpretations do exist.

It’s also incumbent on mainstream media to give a voice to those in the African community who feel impacted by biased reporting. Some news outlets are doing this. But it’s equally important these media organisations take a hard look at their coverage of these issues and the power of the words they use. Media are not the cause of racism, but they do have the power to shift public attitudes and increase understanding in society.