This year [Pauline Hanson] has voted effectively 100% of the time with the Turnbull government. Honestly you may as well vote LNP if you are voting One Nation because there is no difference.

In recent weeks, senior Labor Party figures have sought to draw attention to the voting patterns of Pauline Hanson’s One Nation party, arguing that a vote for the minor party is a vote for the Coalition.

At the Labor campaign launch in the Queensland seat of Longman ahead of Saturday’s crucial byelections, opposition leader Bill Shorten said it’s “a fact that if you vote One Nation, you are voting [Liberal National Party]. You are not protesting, you are being used to send a vote to the LNP.”

Earlier this month, deputy opposition leader Tanya Plibersek said that in 2018, Pauline Hanson had “voted effectively 100% of the time with the Turnbull Government”.

Let’s look at the records.

In response to The Conversation’s request for sources and comment, Tanya Plibersek said:

Pauline Hanson voted with the Liberals to cut school funding and voted to cut family benefits while she voted herself a massive $7,000 a year tax cut. Australian voters deserve to know the truth about Hanson’s voting record in Canberra.

Plibersek’s comment related to votes on second and third reading votes (including amendments) on legislation.

Plibersek’s office highlighted 20 such votes in 2018 in which Labor and the Coalition disagreed. Of those, Hanson abstained from one vote, and voted 18 times with the government. (The equivalent of 95% of the time, with the abstention excluded.)

A spokesperson told The Conversation Plibersek used the qualifier “effectively” in her original comment to indicate that Hanson voted with the Coalition almost all of the time.

Deputy opposition leader Tanya Plibersek said Pauline Hanson has “voted effectively 100% of the time with the Turnbull Government” in 2018.

Parliamentary records show the figure to be between 83-86%, depending on the measure used.

Pauline Hanson’s One Nation party has cast 169 formal votes in the Senate to date in 2018. Of those, it was in agreement with the government 83% of the time.

If we look at the 99 occasions where the government and opposition were in disagreement, and One Nation cast an influential vote, we see that the minor party voted with the government 86% of the time.

Voting in the Senate

Votes in the Senate can be determined “on the voices” or “by division”.

For a vote to pass on the voices, a majority of senators must call “aye” in response to the question posed by the chair.

If two or more senators challenge the chair’s conclusion about whether the “ayes” or “noes” are in the majority, a division is called.

Bells are then rung for four minutes to call senators to the chamber. The question is posed again, and senators vote by taking their place on the right or left hand side of the chair, before the votes are counted by tellers.

Voting records are only published for votes passed by division.

We can look to parliamentary records to test Plibersek’s claim.

Plibersek’s comment referred to votes on the second and third readings of legislation in the full Senate, excluding procedural votes, motions and votes in Senate committees.

But votes that take place in Senate committees, after the second reading, but before the third, are also important. Much of the legislative process is done “in committee”, where various parties propose amendments to legislation, and these are voted on.

So counting only the full Senate votes on legislation as being significant does not give the full picture. 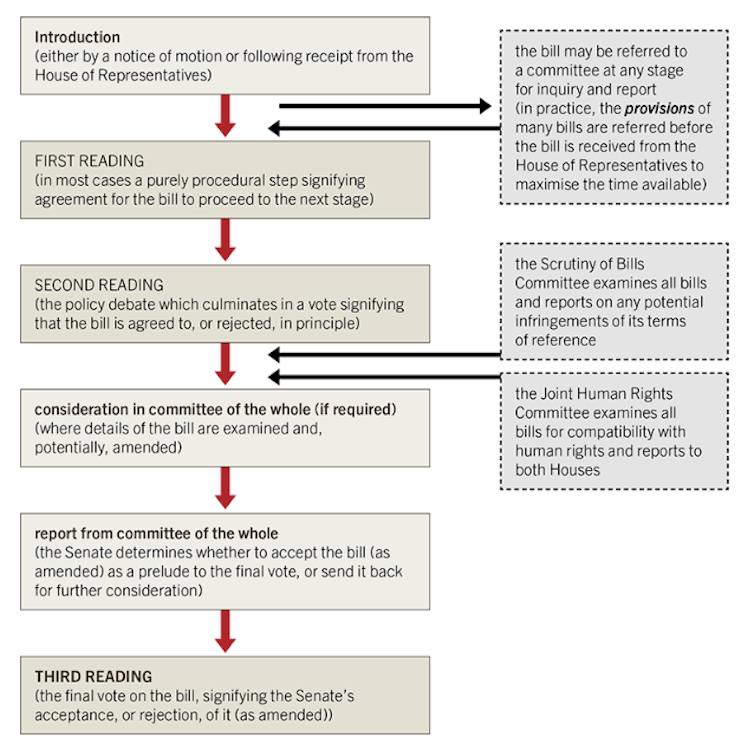 Stages of consideration of bills in the Australian Senate. Parliament of Australia, Brief Guides to Senate Procedure

In this FactCheck, I will consider all the divisions, from a number of different angles.

There have been 187 divisions in the Senate so far this year. Of those, One Nation:

Of the 169 divisions where One Nation voted, it was in agreement with the government 83% of the time.

But it’s important to consider the balance of power.

There have been 110 such divisions between the Coalition and Labor in the Senate in 2018 to date.

In these 110 divisions, One Nation:

If we look at the 99 divisions where the Coalition and Labor were in disagreement, and One Nation cast an influential vote, we see that the party voted with the Coalition 86% of the time.

By comparison, in the 110 divisions where Labor opposed the government, the Australian Greens supported the Coalition 5% of the time, and the Centre Alliance (formerly Nick Xenophon Team) did so 56% of the time.

The calculations for the Greens and Centre Alliance above do not include cases where the party vote was split, or abstentions. – Adrian Beaumont

The author’s points and statistics appear to be all in order.

As the FactCheck shows, while One Nation has not voted with the government 100% of the time, it has supported the Coalition in a large majority of cases. – Zareh Ghazarian

The Conversation FactCheck is accredited by the International Fact-Checking Network.

The Conversation’s FactCheck unit was the first fact-checking team in Australia and one of the first worldwide to be accredited by the International Fact-Checking Network, an alliance of fact-checkers hosted at the Poynter Institute in the US. Read more here.

Have you seen a “fact” worth checking? The Conversation’s FactCheck asks academic experts to test claims and see how true they are. We then ask a second academic to review an anonymous copy of the article. You can request a check at checkit@theconversation.edu.au. Please include the statement you would like us to check, the date it was made, and a link if possible.