Jupiter is the largest planet in the Solar system and has been studied intensively for hundreds of years, so you might think there would be little left to find.

But earlier this month, researchers announced that another 12 moons have been added to the number of such bodies orbiting the giant planet.

Read more: The latest from Juno as Jupiter appears bright in the night sky

That brings the tally for Jupiter to a whopping 79, the most moons for any known planet. But where did these newly discovered moons come from, and what do they tell us about Jupiter and its place in the Solar system?

The Solar system’s giant planets have two types of moon: regular and irregular.

Regular moons orbit close to their host, follow nearly circular paths, and move in the same plane as the planet’s equator. In some ways, these moons resemble miniature planetary systems, and we think that they formed in much the same manner as the planets around the Sun.

As the giant planets gathered material from the disk of gas and dust that surrounded the young Sun – a process known as accretion – they were surrounded by their own miniature disks. Within those disks, the regular moons grew, all in the planet’s equatorial plane. 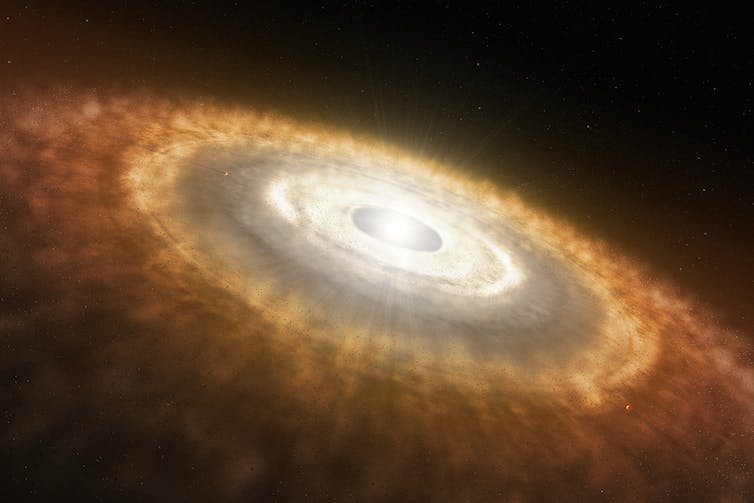 Artist’s impression of a protoplanetary disk - a place where planets are born. Around young giant planets, similar disks give birth to regular moons. ESO/L. Calçada

But the irregular moons are another story.

Their orbits are highly eccentric (elliptical) and inclined relative to the plane of their host planet’s equator. Many even move on retrograde orbits, travelling in the opposite direction to the spin and orbital motion of their hosts. And they are located much farther from their planet than their regular cousins.

Where do the irregulars come from?

Because of their wild orbits, the irregular moons cannot have formed in the same way as their regular cousins. Instead, they are thought to have been captured by their host planets as the process of planet formation came to an end.

We think that each giant planet captured just a handful of irregular moons – a number far smaller than we see today. Over the billions of years since, those moons were pummelled and destroyed by passing asteroids and comets, and collisions with other members of their swarm.

The shattered fragments of those ancient satellites form families of smaller moons - the irregulars we see today. For example, among Jupiter’s satellites we see at least four distinct families of irregular moons, each named after their largest member. 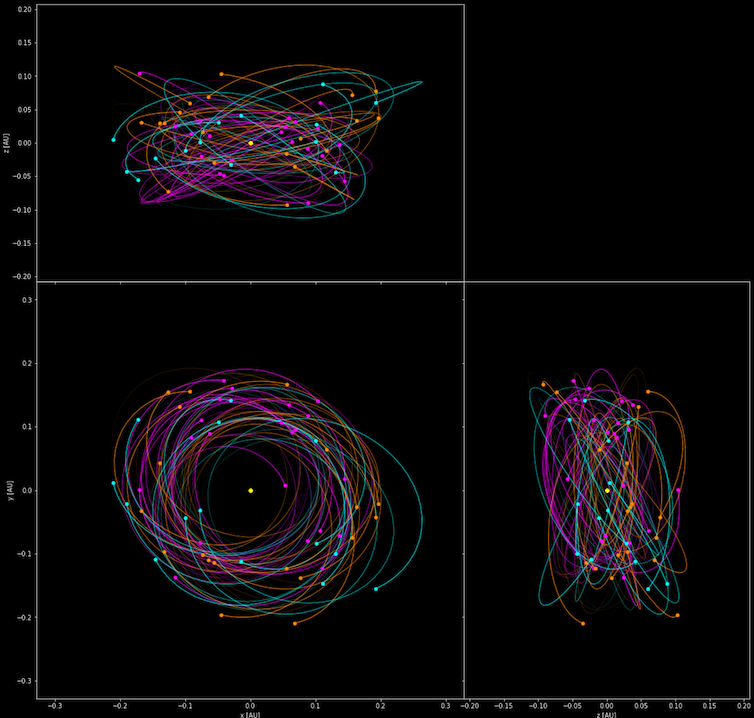 The motion of Jupiter’s irregular moons around the giant planet. The main plot (bottom, left) shows the orbits looking top-down, while the other (right and top) plots show the movement out of the plane of the system. Moons of the same colour are members of the same family. Christopher Tylor

What does the new discovery add to our understanding?

If we consider Jupiter’s moons in terms of their orbital distance, and the direction in which they move, we can break them into three distinct groups.

The first consists of the inner eight moons, including the famous Galilean moons Io, Europa, Ganymede and Callisto, whose orbits lie in the plane of Jupiter’s equator, at distances less than 2 million kilometres.

The second group lies significantly farther from the planet, and move on orbits tilted by between 25° and 56° relative to Jupiter’s equator. These are the prograde irregulars - ten moons orbiting at distances between 7 million and 19 million km. Two of the new discoveries are members of this group.

The final and most populous group is the retrograde irregulars - 60 moons located between 19 million and 29 million kilometres from Jupiter, all moving on orbits inclined by between about 140° and 170° to Jupiter’s equator.

In other words, they orbit backwards, in the opposite direction to everything else. Nine of the new discoveries fall into this category. 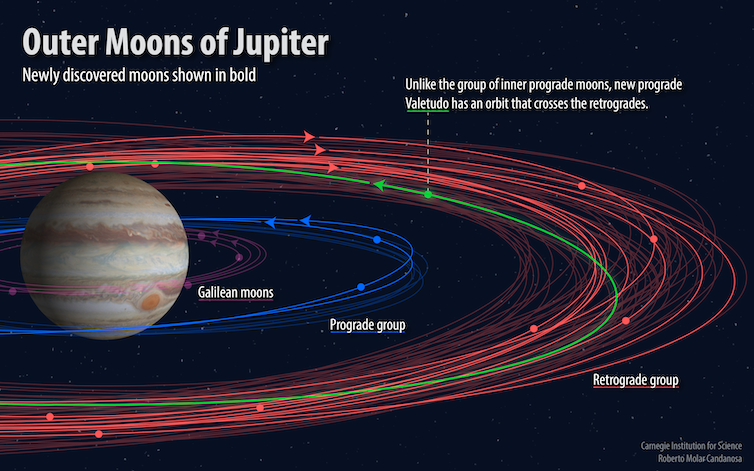 So that covers 11 of our new moons. What of the 12th? Well, it turns out that the most exciting of the new moons is an oddball - an object that does not fit into any of the groups mentioned above.

Valetudo is the dimmest of the newly discovered moons. At just a kilometre in diameter (or less), it is the smallest Jovian moon found to date. 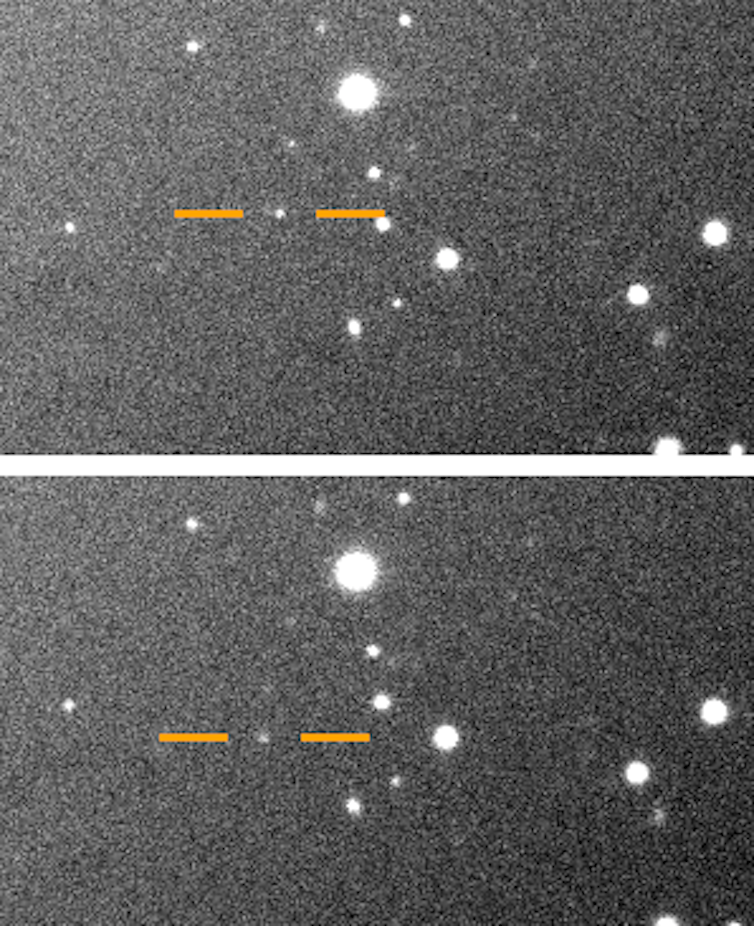 The yellow lines point to the tiny moving speck of light, the newly discovered moon Valetudo. Carnegie Institute for Science

In terms of its orbital distance, Valetudo lies bang in the middle of the retrograde irregulars - some 24 million kilometres from the giant planet. But its orbit is prograde - meaning that it moves in the direction of Jupiter’s rotation, and in the opposite direction to all other satellites in its vicinity.

How did something so small survive in the celestial firing range around Jupiter?

Could Valetudo be the final surviving remnant of a previously uncharted family, whittled to nothing by aeons of headlong flight into the retrograde irregulars?

Are there are other members of the Valetudo family out there, awaiting discovery?

Read more: Water, water, everywhere in our Solar system but what does that mean for life?

Beyond these questions, Valetudo’s small size offers an important clue to the origin of the Jovian satellite system. Had Valetudo been on its current orbit while Jupiter was still accreting, it would have been too small to resist the drag of the inflowing gas. Like a ping pong ball in a gale, it would have been dragged inwards, to be devoured by the giant planet.

In other words, tiny Valetudo tells us that the process that created the irregular satellite families continued long after the formation of Jupiter was complete. In fact, that process likely continues even now, with occasional collisions tearing moons asunder, to birth new families of irregular worlds.

Who knows? The next such collision might come when Valetudo runs into one of the retrograde irregulars. Given that their orbits cross, it may only be a matter of time.