Invasive species have a devastating effect on biodiversity. In Australia, introduced red foxes and feral cats have been implicated in the majority of the extinctions of the native mammal fauna, which has been decimated since European arrival.

But there’s a herbivore that also causes eco-catastrophe. Rabbits both compete with native animals for food and shelter and act as easy prey for abundant populations of cats and foxes. By over-grazing vegetation and reducing habitat complexity, they make hunting easier for introduced predators.

Read more: Invasive predators are eating the world's animals to extinction – and the worst is close to home

Food webs are complex. Because of this, once an invasive species is embedded in a food web, simply eradicating them without considering the potential knock-on effects to other species they interact with, could cause unintended and undesirable consequences. We modelled different rates of rabbit population reduction to assess what level of control might be best for aiding the conservation of native mammals and not causing negative outcomes.

Rabbits, famously, reproduce rapidly and can cope with a relatively high predation rate. This can cause “hyper-predation”, where rabbit-inflated cat and fox populations indirectly increase the predation pressure on native mammals. This is especially so when rabbit populations intermittently crash due to, for example, extreme environmental events (like severe and prolonged droughts) or disease. This causes predators to switch their diet and eat more native mammals. 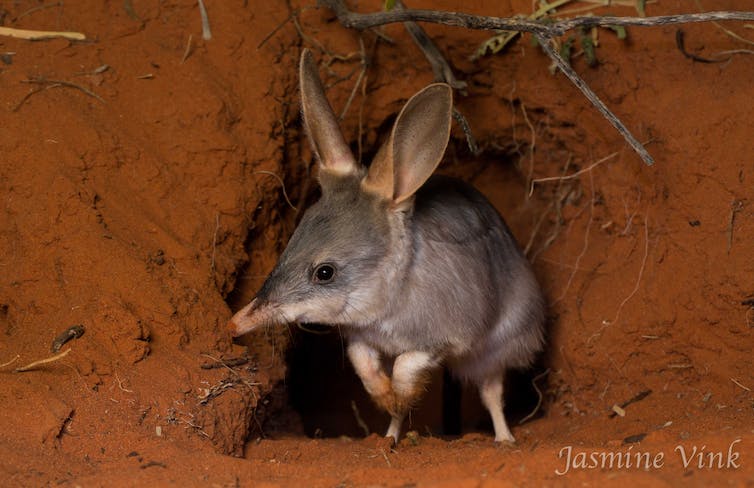 Threatened species such as the greater bilby are likely to benefit from rabbit control. Jasmine Vink

This logically suggests that reducing rabbit numbers might thus help reduce cat and fox populations, by removing their abundant prey. Collectively this should benefit native plants and animals, including many threatened mammal species. However, ecosystem and pest management is a complex game.

When controlling rabbits we need to look beyond one or two species. We should consider the potential consequences for the entire ecological community, which ultimately depend on how changes in one species percolate through the network of ecological interactions between them.

Our new research, recently published in the Journal of Applied Ecology, set out to examine these questions in more detail. We consider other key players in Australia’s arid regions, such as kangaroos and dingoes, when looking at the effects of rabbit control on small native mammals. Our aim was to provide a better understanding of how changes in rabbit populations might affect other species via the food web.

We developed a multi-species ecological network model to describe and quantify how changing rabbit abundance can affect species on different feeding levels. In addition to rabbits, small native mammals, and mesopredators (cats and foxes), our model also considers apex predators (dingo) and large herbivores (kangaroo) as part of the Australian arid food web. This model allowed us to examine changes in predator-prey interactions (including potential prey switching and hyper-predation) and how these could affect the survival of native prey through time. 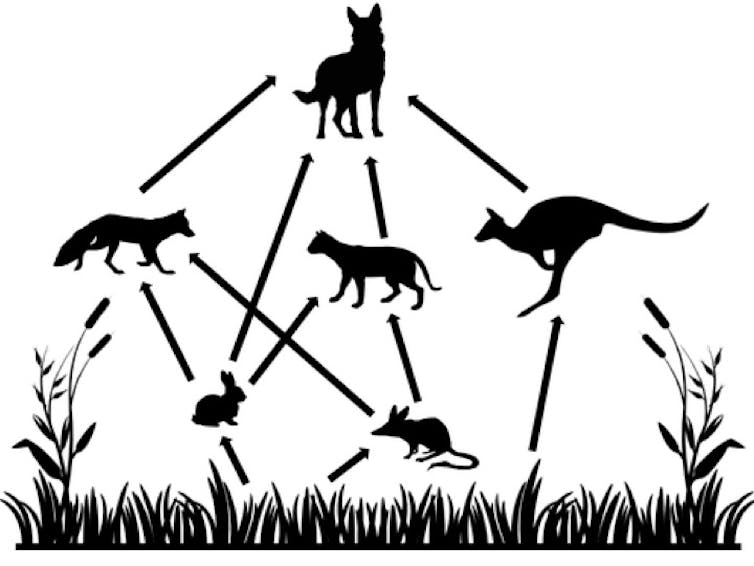 We found that removing rabbits at rates between 30-40% appeared to benefit small mammals. This is approximately the rate at which rabbits are currently managed in Australia using biocontrol agents (introduced diseases).

Rabbit control in Australia typically involves a “press and pulse” approach. Rabbit populations are suppressed via biocontrol (press) and periods of warren destruction and poisoning (pulse). Finding that reducing rabbit populations by around 40% seems most beneficial to small mammals is important, as it informs how and when we combine these strategies.

The 40% rate corresponds well with the disease-induced (press) mortality rate in rabbit populations due to rabbit haemorrhagic disease and myxomatosis. These are the primary biocontrol agents used in arid Australia to control rabbit populations.

Our study supports rabbit-reduction strategies that involve sustained “press” control, that kill a moderate portion of a rabbit population, with less frequent removal at higher proportions of the population.

To effectively manage invasive species, it’s important to focus on entire communities. Targeting single species might not be enough – every animal exists within a complex web of interactions.

Read more: Mourn our lost mammals, while helping the survivors battle back

There has been much focus by the current government on controlling feral cats, as a way to conserve many of Australia’s unique and threatened mammal species.

However, more focus could be devoted to protecting habitat cover and complexity, by reducing the land clearing and over-grazing that makes hunting easier. We can also manage rabbits sensibly to reduce competition for resources, and indirectly control cats and foxes.