Many Australians take it for granted we can drink untreated tap water, without worrying about the health effects.

However, a recent audit criticised the regulation of pollution in the massive Warragamba Dam drinking water catchment, the biggest single metropolitan water reservoir in Australia.

Read more: Why does some tap water taste weird?

The Auditor-General’s report found that the NSW Environmental Protection Agency (EPA) was not effectively regulating water pollution in drinking water catchments. The report mentioned WaterNSW, which is the authority that supplies the majority of Sydney’s water needs. The report concluded that responsible bodies like the EPA and WaterNSW need to work together more effectively to protect Sydney’s water from pollution.

Problems in the Warragamba Dam, which is surely the most regulated and monitored water supply in the country, raise the issue of regional water quality.

The audit was triggered by an independent triennial review of Sydney’s water supply (in which I participated), which was completed last year.

One of the issues we identified was rising salinity in Warragamba Dam. Although Sydney’s water supply has relatively low salinity by Australian standards, the level in Warragamba Dam (measured as electrical conductivity) was about twice that of other, smaller storages. 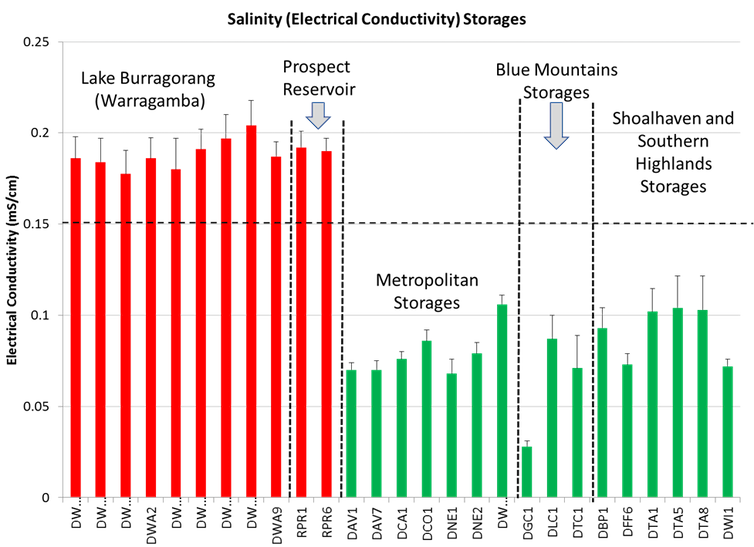 Coal mines in the Warragamba catchment are a major source of salinity. The Springvale mine is the largest, and it disposes a large volume of wastewater to the catchment. I have been very concerned about the impact of this coal mine discharge on water quality for many years.

Read more: Is your drinking water safe? Here's how you can find out

The Springvale mine’s current discharge licence permits more than 10 Olympic swimming pools of saline waste water to be released daily into the Warragamba catchment. The waste water from Springvale has a salinity level eight times higher than that of Warragamba Dam.

If pollution is allowed in such an important water supply, what is happening to your local water supply?

Read more: We asked five experts: do I have to drink eight glasses of water per day?

Currently there are several water supplies in Tasmania that have “boil water” alerts. Boil water alerts indicate that harmful pathogens could be present in the water supply, and it should be boiled for at least a minute before drinking.

In some communities in Western Australia the water supply is tainted by contamination that is not managed by simply boiling it. High nitrate levels in tap water have been reported from some communities, such as Meekatharra, a small township 700km northeast of Perth that relies on groundwater.

High levels of nitrates in the water cannot be easily treated, and are particularly dangerous for infants. When drunk by babies it can affect their blood oxygen levels and cause a disease called blue baby syndrome. Western Australia’s Water Corporation recommends that babies under three months do not consume the water, and bottled water is recommended for young babies.

Water in Katherine, in the Northern Territory, has been contaminated by toxic and persistent chemicals used in firefighting foam. The toxins have accumulated in the groundwater. Many other communities across Australia have also been similarly affected.

Uranium has also been reported in some remote community water supplies from the Northern Territory. Alarmingly, uranium levels were above Australian drinking water guidelines, and there are no clear guidelines for managing the problem.

These examples from regional communities reinforce the importance of preventing contamination from entering water supplies.

It is worth remembering that 20 years ago protozoan pathogens from the Warragamba supply resulted in several boil water alerts across Sydney.

The NSW Auditor-General’s report found serious issues in how the EPA manages water pollution in Sydney’s drinking water catchments. For example, much of the data used by the EPA was self-reported by industry sources.

It may be surprising to many Australians that our water quality varies so wildly across the country. Our pollution watchdogs need to be strengthened and resourced properly so they can protect our most fundamental resource.