Circus Oz is 40 years old. Some shows in the company’s extraordinary history of annual productions stand out in memory for the comic play, the political commentary, the outrageousness. The circus form is distinguished by the effort to connect with the audience and Circus Oz has always excelled at creating connections.

Even with a subversive undertow to the company’s work, it generates affectionate loyalty among audiences and this partly explains its longevity. Circus Oz fosters a sense of community in Melbourne, and among the hundreds of performers who have worked with the company over decades.

Precarious is the first of three new Circus Oz shows in 2018 as the company undergoes a process of artistic renewal, and it will work with an orchestra and a rock band in shows opening later in the year. Precarious, directed by Rob Tannion and Kate Fryer, presented the Circus Oz ensemble in a thematically linked production of acrobatic display. Its young performers will have grown up with contemporary circus — in contrast to earlier generations of Circus Oz performers who helped invent it. 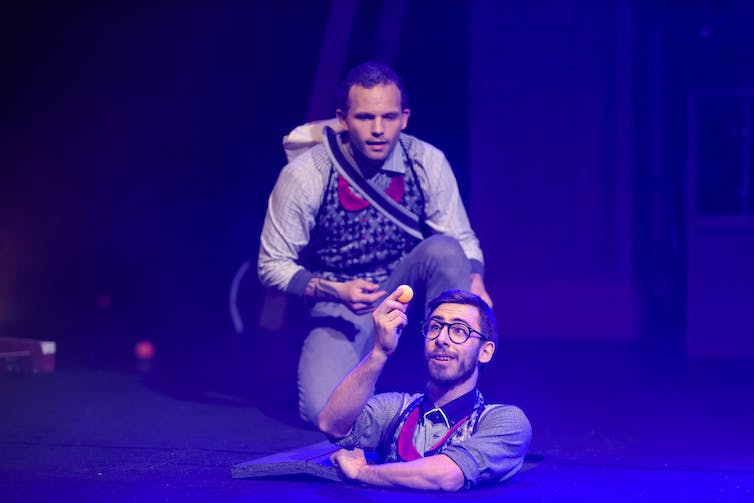 While circus arts have become synonymous with the famous larger companies including Circus Oz and particularly Cirque du Soleil, there are numerous accomplished acrobatic troupes. Segments of Precarious reminded me of a show by the Canadian Les 7 Doigts de la Main (7 Fingers) presenting interchangeable performers in pared-back acrobatics with minimal theatrical artifice. But Circus Oz continues to engage an audience through circus spectacle.

While Precarious delivered a more harmonious, balanced group of acrobatic performers in contrast to the rambunctious argumentative characters of yesteryear, it retained the company’s trademark tone of cheerful fun and silliness. The production may not be vintage Circus Oz but it did offer a different type of viable small tent show, and it was developed in partnership with the Royal Botanic Gardens Victoria.

Hence the narrative about the loss of fertility in the Ministry of Seed Management, Nature Division, and the urgent search for a fertile seed. This is a short show clearly intended for family audiences during the school holidays and, in the interests of audience renewal, this production will especially please the younger members of the family.

Uncle Colin Hunter’s powerful, heartfelt welcome to country opened Precarious on June 30. The performers who had greeted the audience reappeared in costumes with a retro-look suggesting a turn-of-the-20th-century circus. As they balanced, tumbled and leaped forward in acrobatic falls and catches, they used cardboard boxes and then wooden boxes as apparatus. 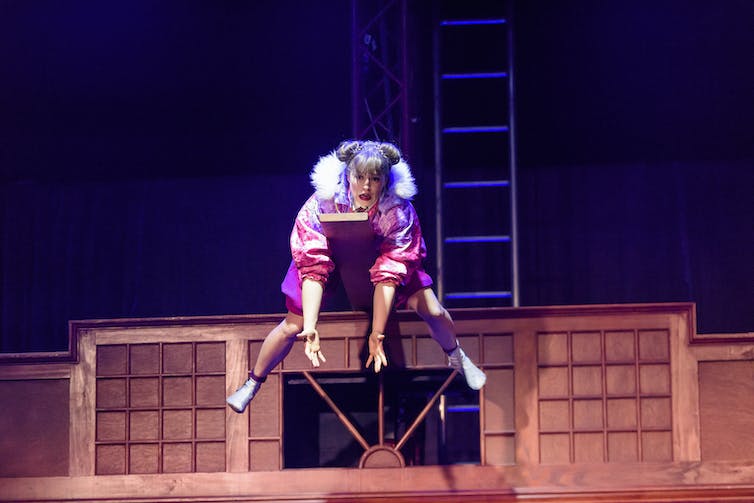 Read more: Sequins and symphonies: how opera ran away with the circus

But it was the various combinations of two and three person-high, standing shoulder balances that were the highlights of the action. There were familiar acts such as foot juggling or ball juggling or hula hoops while other acts such as a swinging pole were less typical. In a metaphoric effect the trapeze turned into a lift in a building at the press of an imaginary button.

There were recognizable character-types: a scientist appearing through a trap door; a mailman delivering a seed packet with difficulty. The newly discovered seed was hidden up a hollow pole and then inadvertently swallowed by the female clown working in a slapstick duo and had to be recovered. In the one direct concession to adults-only Circus Oz, Emily Gare appeared with an innocuous lunch box and took out the hardware to hammer a nail up her nose.

Precarious presented fluid acrobatic action as male performers moved with sensuous lightness and female performers inverted the body’s axis in angular handstand balances. This action will inspire younger audience members to want to run off and join a circus skills class after school.

A scaled down two-person band accompanied throughout drawing the focus during its jazz influenced score and live vocals. Aerial acts included Tania Cervantes Chamorro’s demanding aerial sling act with its adjustable configurations, which she made seem simple and completely effortless so that a spectator felt like he or she could easily join her in the air. Overall, Precarious was an enjoyable show.

The use of facial and gestural pantomime is a stylistic choice that may work better for younger audiences. Those expecting the company’s confrontational style might have been bemused and because it was possible to miss the short verbal statement about the loss of seed fertility that underpinned the gentle clowning action.

For anyone looking for Circus Oz legends, Tim Coldwell was entertaining – right way up – by selling programs, and Matt Wilson by selling popcorn. This show might have shifted away from the political outrage and larrikin shock value of the early Circus Oz repertoire, but it offered instead the dynamic strength of a younger generation of circus performers working in equitable unison demonstrating a new type of politic of shared co-operation. Precarious suggested Circus Oz is 40 years young.