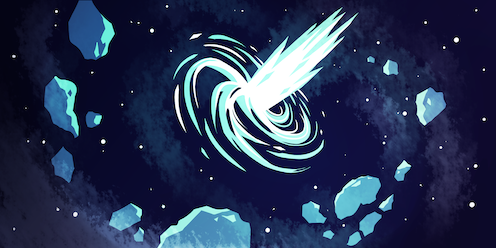 The existence of wormholes is not forbidden by our current theories of the universe. So we can say that they do exist in theory. Marcella Cheng/The Conversation NY-BD-CC, CC BY-SA

This is an article from Curious Kids, a series for children. The Conversation is asking kids to send in questions they’d like an expert to answer. All questions are...

Hi, my name is Vaibhav Kannan. I’m 11 years old and I live in Melbourne. I am in Year 7 and my question is: what are wormholes, and if they do exist, how do they form and work? Thanks. – Vaibhav Kannan, age 11, Melbourne.

A wormhole is like a tunnel connecting two places in space. By going through the wormhole, you could - in theory - travel immense distances across space remarkably quickly, even if the two ends of the wormhole were very far apart.

If you had one end of the wormhole at school, and the other end at home, then you could just step through the wormhole in class and arrive at home. The other end could even be on a far away planet in a distant galaxy and you could easily go out on a day trip to another planet.

So wormholes would be incredibly useful things to have around and are great for science fiction stories.

The problem is, as far as we know, there are no wormholes like this in our universe.

Read more: Explainer: what is radiocarbon dating and how does it work?

We haven’t found any evidence of them existing and we don’t have any idea how they could form.

However, the existence of wormholes is not forbidden by our current theories of the universe. So we can say that they do exist in theory.

In science, a theory is an idea or way of describing what happens or could happen in reality. You might have heard of the theory of general relativity, created by physicist Albert Einstein over a hundred years ago. It describes gravity, which is what keeps us on the Earth and keeps the Earth orbiting the Sun. This theory also describes wormholes in a mathematical way.

So how do wormholes work in theory?

First, we need to think about something called space-time. We often imagine space-time as a stretchy fabric sheet. Everything in our universe lives on this imaginary space-time fabric sheet.

By thinking about the fabric sheet, we are visualising something called a two-dimensional surface. Someone walking around on the sheet can choose two kinds of movement: going forwards/backwards or going left/right. In reality, space is three-dimensional: you can also jump up and down!

In fact, there’s a fourth dimension: time. You might not think of time as a “dimension” but physicists do. Put all the dimensions together, and you get what we call space-time.

Getting back to wormholes, imagine we want to get from one place to another on the space-time fabric, say from home to the distant planet. Even with a spaceship this journey could take thousands of years or even longer.

What if we could fold over the fabric so that our home and the far away planet line up, and then make a hole connecting the two layers of space-time? Then we would have a shortcut tunnel to get to the planet without having to go the long way around! 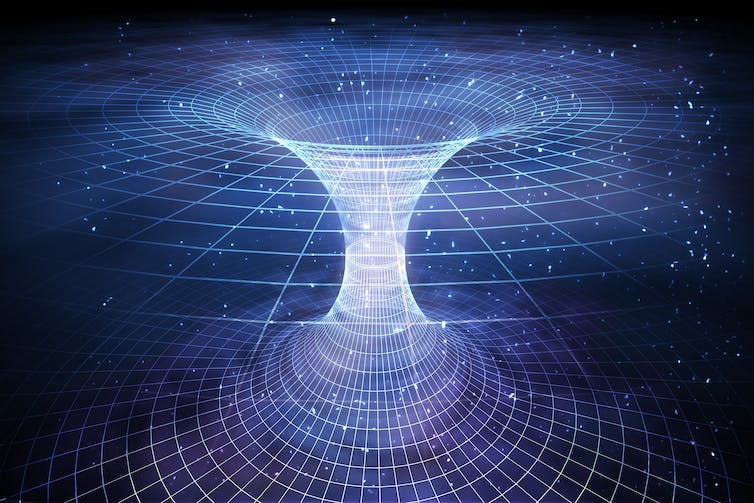 Could we make a hole connecting the two layers of space-time? Shutterstock

No one knows where to start on how or if a wormhole could be made in reality, but it’s pretty fun to think about them and they’d be great for exploring our enormous universe.