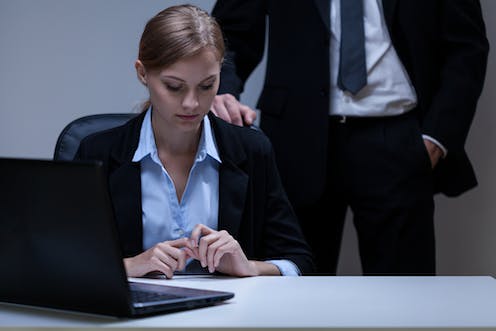 Thanks to the worldwide #metoo and #TimesUp movements, and criminal charges against high profile celebrities, sexual assault and harassment in the workplace and beyond has been at the forefront of public discussion over the past year.

In Australia, one in five workers over 15 years of age has experienced workplace sexual harassment over the past five years. One quarter are women and one in six are men. Regardless of the gender of the target, perpetrators are most commonly men. A national inquiry was launched last week to investigate the issue of sexual harassment at work.

But while workplace sexual harassment is often considered an organisational, criminal and ethical issue, it’s rarely considered a public health issue. This is despite 65% of the Australian population participating in the workforce in some capacity. In this week’s edition of The Lancet, my colleagues and I discuss why this needs to change.

Read more: Infographic: A snapshot of domestic violence in Australia

Such mental health effects are evident over the longer term, especially for women. Compared to men, women who experience sexual harassment are twice as likely to show persistent psychological distress two years later. They also have worse physical health symptoms and satisfaction with their health.

Sexual harassment and assault that occurs at work, or in any other setting, can act as a stressor that produces an involuntary physiological response. This type of stress can cause adverse effects on blood pressure, cortisol (the stress hormone), pulse rate and changes in heart rate variability.

This biological response to stress can remain, even after the removal of the threat, and can precipitate mental disorders such as PTSD, depression, anxiety and other chronic diseases. The use of unhealthy behaviours such as substance and alcohol use and smoking in order to cope with such stress has also been associated with chronic disease risk particularly among women.

Who’s most at risk of poor health from sexual harassment?

The effects of workplace sexual harassment on health may be stronger for some people than others, for example, minority groups. Black women are more likely than white women to report PTSD symptoms following harassment or assault.

Young workers are also more likely than older workers to be victims of sexual harassment, and more likely to suffer negative health outcomes because of it.

Organisational characteristics can influence employee health outcomes. In one study, women working in male-dominated industries had poorer health as measured by a stress hormone taken after work.

In another study, women working in male dominated organisations such as the military who experienced sexual assault were twice as likely to report a heart attack compared to women veterans who had not.

Read more: WHO report reveals the greatest risk to women is often in the home

Who’s responsible for the health and well-being of workers?

In Australian states and territories, organisations are bound by a Work Health and Safety Act. This is intended to provide a balanced, consistent framework to ensure the physical and psychological health and safety of workers. It’s the duty of the person conducting a business to eliminate or minimise risks to worker’s health and monitor the conditions workers face.

Despite these laws, organisational responses to the disclosure, reporting, investigation and outcomes of sexual harassment cases that occur at work are often deemed inadequate by complainants. One study found a staggering 99% of complainants were not satisfied with the workplace process for handling sexual harassment complaints.

For individuals, inadequate organisational responses (length of time taken to finalise complaints, failure to act) can re-victimise or re-traumatise survivors and witnesses.

At the organisational level, an act of sexual harassment directly and indirectly compromises productivity, job satisfaction, absenteeism and presenteeism (when employees attend work while ill), staff turnover, morale, and organisational culture. These have been linked to poorer health.

Exposure to sexual harassment prevents employees reaching their full professional and personal potential and their contribution to broader society.

Organisations considered by their staff to treat harassment claims fairly, and which have legitimate and clear consequences to perpetrators are more likely to see deterrent effects on prospective perpetrators.

On the other hand, tolerant leadership including a lack of consequences for perpetrators, minimising or justifying behaviours or victim blaming, is counterproductive to achieving a safe environment free of sexual harassment and can embolden existing and prospective perpetrators.

Perceptions of workplace injustices can also deter prospective complainants from pursuing action. This has health consequences, particularly for members of minority groups.

There is little doubt reducing the rates of sexual harassment would improve employee health outcomes. Organisational education and training programs for leadership and personnel, gender equality initiatives, auditing of human resource policies, increased transparency of case outcomes and length of time for investigation outcomes, and unconscious bias programs are all ways of addressing sexual harassment at work. Ultimately, enhancing the “psychosocial safety climate” of a workplace is a priority.

Beyond the workplace, challenging complex issues that drive sexual harassment behaviours could ultimately benefit the health of the population. This includes targeting male entitlement, rigid gender norms, and the subjugation and objectification of women that arise from patriarchal power structures and begin in early life.