The Australian Senate today passed a motion to investigate whether purchasable random rewards in video games (known colloquially as loot boxes) constitute a form of gambling and whether they are appropriate for younger players.

Our recent paper, which was cited in the senate motion, explores exactly these questions.

We found that the loot boxes in almost half (45%) of the 22 games we analysed met the criteria to be considered psychologically similar to gambling, even though they are rated as appropriate for adolescent players under the age of consent for gambling.

What is a loot box?

Loot boxes are digital containers of randomised rewards, and are available in a number of video games. The box may contain rewards ranging from cosmetic items which alter the appearance of in-game characters to functional items that increase the player’s power in some way (for example a gun that fires faster or does more damage).

In our research, we sought to answer two questions: are loot boxes like gambling and, if so, what should be done about it?

However, simultaneously, it may also be true that loot boxes represent a troubling and potentially inappropriate monetisation strategy, with the potential to cause short and long-term harm to some players. Our intent is to educate readers about loot box mechanisms, and promote a reasoned, evidence-based discussion about ethical practice in video games.

Loot box rewards may be highly desirable or valuable (for example, a particularly valuable cosmetic item or very powerful weapon), or virtually useless and undesirable (items referred to as “vender trash”). Most importantly, the contents of the box are determined by chance. Some (but not all) loot boxes are purchasable for real money. In some cases, items earned from a loot box can also be “cashed out” for real world money.

The problem is that spending real money on a chance outcome that results in some people “winning” and others “losing” is fundamental to gambling activities. Thus, we analysed the loot box features in 22 console and PC games released in 2016 and 2017, with a view to understanding how psychologically similar they were to gambling.

We used five criteria to distinguish gambling from other risk-taking activities. These have been developed by University of Trent psychologist Mark Griffiths in his work on behavioural addictions and gambling disorders. To be considered psychologically similar to gambling, loot boxes must involve:

We took a reasonably strict interpretation of the final criterion; assuming that people only “won” if they gained some form of in-game competitive advantage (for example more powerful weapons). Arguably, this approach ignores the subjective value that might be created by the scarcity of, or player preference for, certain cosmetic items. However, it appeared to us to most closely resemble Griffiths’ intent.

Loot boxes in just under half of the games (45%) met all five of Griffiths’ criteria and, thus, could be considered psychologically akin to gambling.

All of the loot boxes operated on a variable ratio reinforcement schedule – a technical term for a reward given to a person on average every so many times they engage in a particular behaviour. This type of reward schedule results in people quickly learning new behaviours (for example buying loot boxes) and repeating them often in the hope of receiving a reward. The strategy is effective because the next time a box is opened it might be the “big win”. 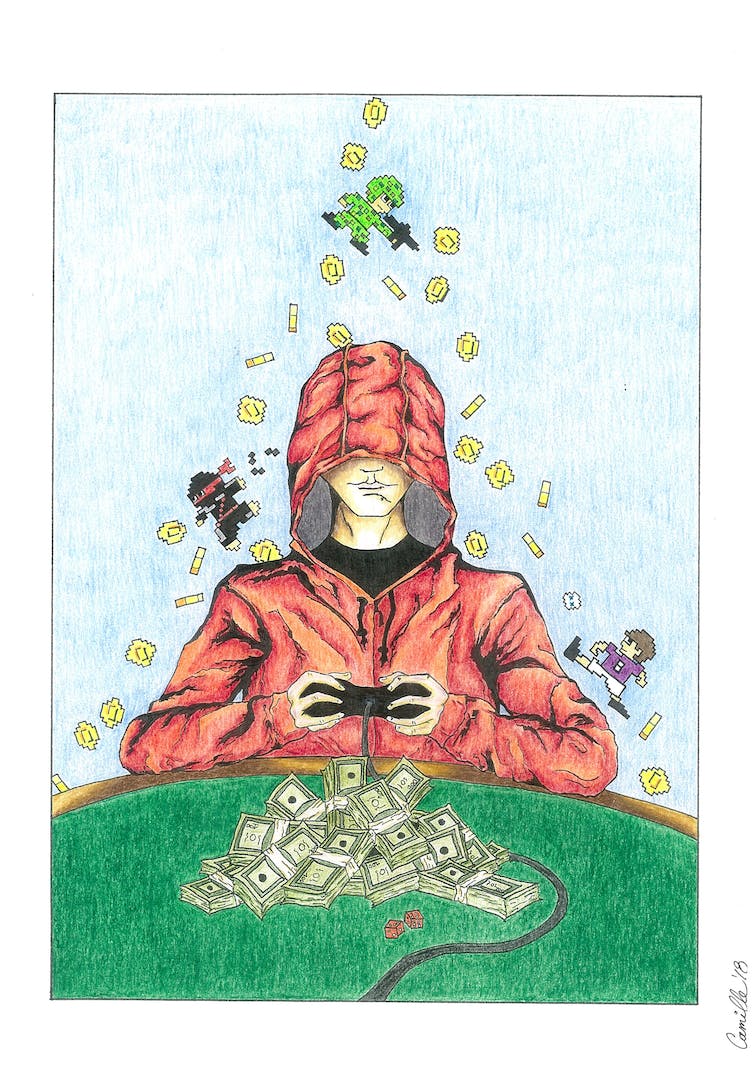 Adolescent gamers face a higher risk of developing problematic gaming behaviours if they are exposed to gambling at a young age. Lauren C. Hall, CC BY-SA

Perhaps most concerning was the fact that at least five of the games had mechanisms available to on-sell virtual items, allowing players to cash out their winnings (though four of these five had terms and conditions explicitly prohibiting this).

The ability to cash out winnings is something that many consider a legal requirement for an activity to be considered gambling. Although the legality of loot boxes is a question for individual regulators and governments, exposure to mechanisms which closely mimic gambling in a psychological sense is concerning to us, especially since all of the games we examined were rated as appropriate for those under the age of consent for gambling.

What to do about it

There is cause for hope. Electronic Arts (one of the largest game studios in the world) has recently announced the removal of loot boxes from upcoming titles. This suggests the games industry is taking consumer and expert feedback seriously, and may take steps to self-regulate.

In our view, this is the optimal solution, given the diverse policy landscapes across the countries in which video games are sold.

Where industry is not willing to self-regulate, and loot boxes are most similar to gambling, regulators may need to consider additional steps, although this should be undertaken selectively. Belgium and the Netherlands have declared at least some loot boxes to be illegal, while the US and UK have decided that they are not a form of gambling. As noted above, the Australian Senate unanimously supported a vote on the 28th of June to refer an inquiry into the legality of loot boxes in video games to the Environment and Communications References Committee.

Most importantly, we recommend that loot box mechanics should be added to content warnings to give users and parents the information they need to properly assess whether particular games are appropriate for themselves or their children. Ensuring that users can make well informed decisions about the appropriateness of content remains one of the strongest consumer defences.

We hope that this work will form the basis for a well-reasoned, evidence-based policy discussion about ethical and sustainable practices in video games. Our intent is not to stigmatise games or gamers, but to spark a discussion about what mechanisms are and are not appropriate for particular audiences, games and the industry more broadly.