However, it is only a small step, and much still needs to be done to tackle the problem.

It is therefore useful to explore what strategies might be effective in informing the public about the issue, and in changing people’s consumption and littering behaviour.

Read more: In banning plastic bags we need to make sure we're not creating new problems

Research shows that fear or shock tactics, or strategies based on shame and guilt, are generally not effective, and can even be counterproductive. High-threat fear appeals can be effective provided that the target audience is already taking positive steps toward the desired behaviour change, or feel that they can easily do so. Crucially, this means that campaigns not only need to tell people about an issue, but also provide straightforward advice on what do to about it.

In this context, campaigns such as “Hey Tosser!”, run by the New South Wales Environment Protection Authority, are ill-conceived. The problem is that encouraging the public shaming of “tossers” creates an unhelpful stereotype that doesn’t actually exist. One study found that Australians are often unaware of their own littering, meaning the campaign might prompt people to identify themselves as “non-tossers” and therefore ignore the message.

The author and social behaviour change expert Les Robinson has suggested that rather than try to scare or shame people into changing, it is more useful to create a positive buzz around change, make new behaviours easy to adopt and sustain, and foster supportive communities to help with change.

This means that whether we want to tackle littering or reduce reliance on plastic bags, it is important to make people feel that they are part of an inclusive movement that is supported by the community and relevant to their own lives.

One example is the WA government’s “What’s your bag plan?” campaign, which urges shoppers to decide how they will carry their shopping after the demise of plastic bags, by becoming either a “bagger” (reusable bags), a “boxer” (cardboard boxes), or a “juggler” (neither!).

The good and the bad

A recent action by Greenpeace, in which overpackaged fruit and veg were labelled with a sticker saying “I’d like this product to be plastic free” and “We love plastic-free fruit and veg”, makes it easy for consumers to view those changes as positive. There is no blaming or shaming, but rather a focus on making it easier for consumers to ask supermarkets for more environmentally conscious options.

On Instagram and Twitter Greenpeace is encouraging consumers to share photos of excessive packaging, under the hashtag #RidiculousPackaging. This is a proactive way for consumers to take action, and for others to start noticing the overuse of plastic in supermarkets. 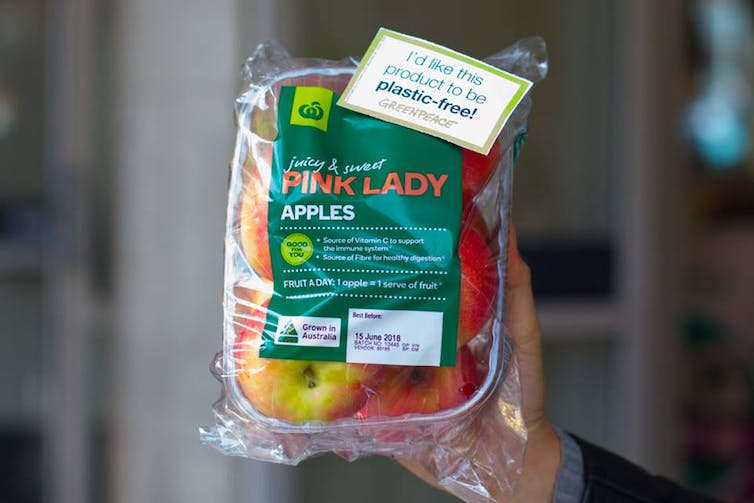 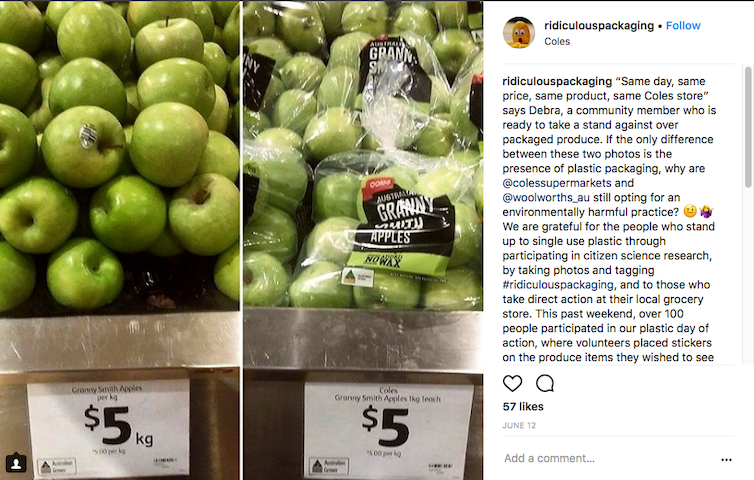 In contrast, other campaigns seek to emphasise the destructive effects of plastic waste. These can be eyecatching, but without a strong message that customers have the power to make a positive difference, they are unlikely to be effective in implementing sustained behaviour change.

The UK Marine Conservation Society’s campaign, showing a drinking straw lodged up a child’s nose (echoing a horrific viral video of a sea turtle enduring the same fate), is both shocking and thought-provoking. But with no clear, positive information showing people how they can directly address the problem through changes in their own lives, viewers may simply disengage. 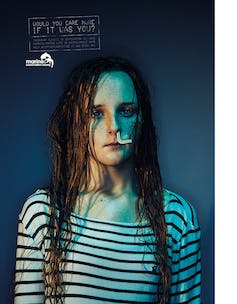 One of the most powerful campaigns in Australia in recent times has been the ABC documentary series War On Waste. Its success can be attributed to a clever mix of shocking information tempered with entertaining and engaging storylines; a lack of blaming and shaming of individuals (although some corporations and politicians have received their share); clear and tangible solutions that viewers can implement; and a feeling of collaborative empowerment.

In combination, these elements have had a positive impact, with the sale of reusable takeaway coffee cups rising sharply after the series aired. If my experience at my local supermarket is any guide, shoppers have taken the message about recycling soft plastics firmly to heart. 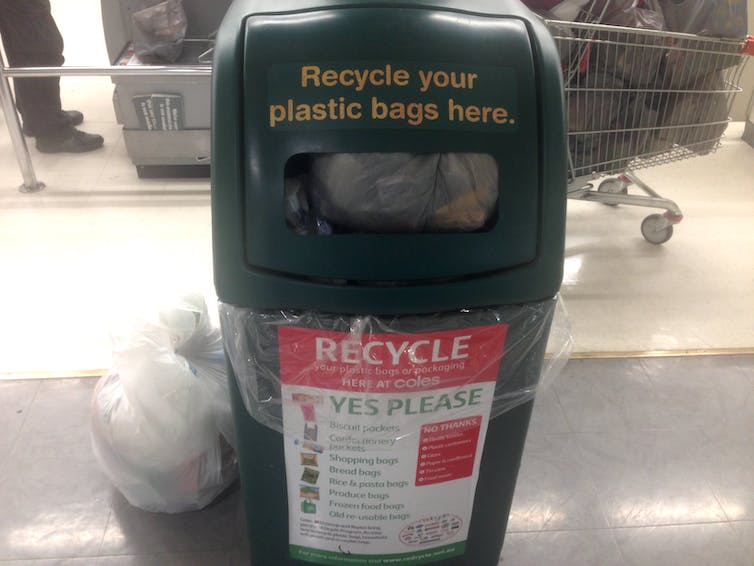 Few people would argue against the reduction of plastic waste. Most people are ready and willing to change, and the agencies that are designing campaigns on the issue would do well to remember this. Positive encouragement and advice are preferable to fear, shame or shock tactics.