As Australian cities grow and transform, we need to ensure we are not building the slums of the future by making buildings so tall and tight they turn our streets into stark canyons. Sydney’s Wolli Creek, where buildings dominate and tower over a transport hub, is an example of where this is happening. It is now considered one of the city’s densest areas.

It’s also vital the community and individuals are enthusiastic drivers of such change, with shared ownership of it. Imaginative projects – at times described as urban acupuncture – can all play a role. This is where small-scale interventions (like green balconies) are applied to transform the larger urban context, improve the environment and make the city liveable.

Going up or out

Whether you go up (higher) or out (more), or both, there are always challenges and opportunities.

The drawback in going out is that we start creeping into our remaining open space, including important biodiversity hotspots. 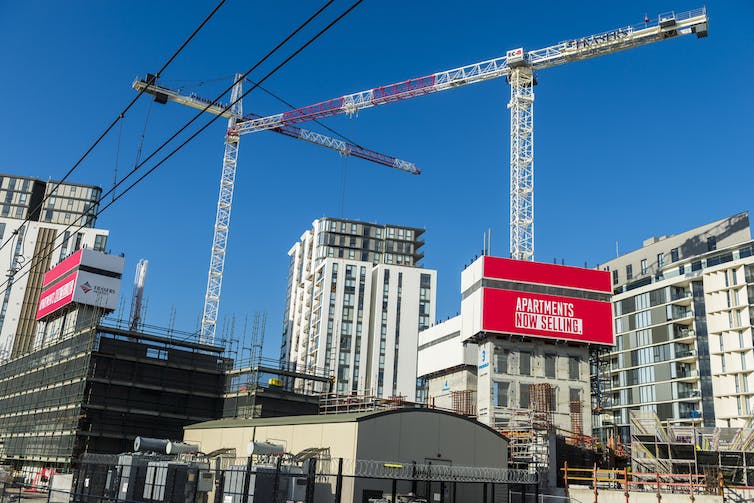 Sydney’s Wolli Creek is considered one of the city’s densest areas. from shutterstock.com

Going out can also encroach on agricultural land. Farmers around the Sydney basin produced up to 20% of the area’s fresh food needs in 2011. But researchers have predicted urban sprawl and rising land prices will lead this to drop to 6% by 2031, losing both produce and jobs.

Going up is an approach driven by proximity to transport, utilities and employment, particularly in Sydney and Melbourne. Major upward developments, like Wolli Creek, are logically being located around transport nodes. But these then become dense and concentrated areas, putting growing pressure on open space and community facilities.

Community consultation is key before any major project and redevelopment, as genuine dialogue supports shared ownership of the outcomes. Existing community projects must be celebrated. Having an engaged and empowered community leads to a healthier, happier population.

In Sydney, new precincts like Waterloo are ambitious and have good intentions. These areas aim to deliver new homes, shops, major transport services, community facilities, parks and open spaces over the next 20 years – and they’re located close to the urban centre.

Waterloo already has three community gardens, which bring together public housing residents through growing and sharing fresh produce. This approach is important to continue and initiate new projects. 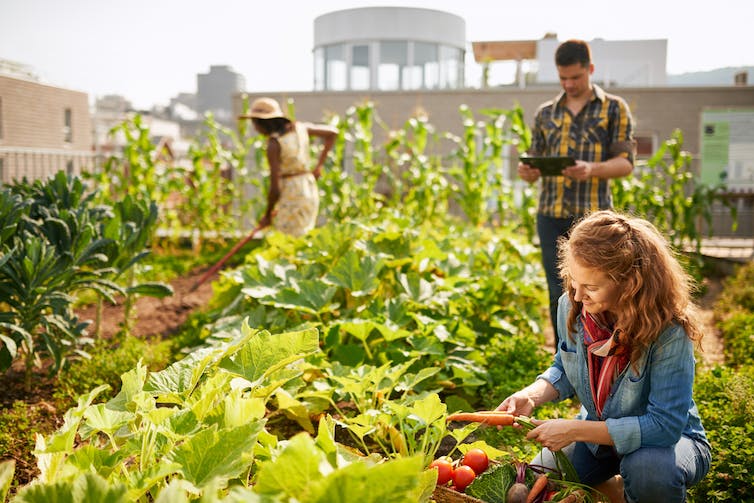 Around the world there have also been successes with city farming where the community grows and sells agricultural produce locally. In skyscraper Singapore, they are farming vertically at Sky Greens, providing an alternative to importing food for this densely peopled city-state.

Green roofs are another alternative where communities can grow flowers and vegetables while providing training and jobs. A good example is the Uncommon Ground rooftop farm in Chicago.

Read more: Australian cities are lagging behind in greening up their buildings

In Australia, the Grounds is a former pie factory in the industrial heart of Sydney’s Alexandria. In 2012, the site began to metamorphose into a cafe, restaurant, bakery, organic mini-farm and more. This is a successful example of how a little greenery has turned a bleak post-industrial site into an enjoyable destination, where young and old from far and wide come to enjoy the plants, animals and coffee. 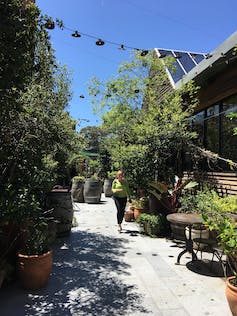 The Grounds in Sydney’s Alexandria was transformed from an industrial site into an enjoyable destination. Herry Lawford/Flickr, CC BY

A domestic garden, a green balcony or a green wall can all play a role – but these need ongoing care and attention, which means individuals and engaged communities must drive the enthusiasm.

Nature in the city

So, for a start, let’s not build fast and furiously without grasping the place as a whole and making the most of what is already there. This means preserving mature trees and shrubs, leaving open space unpaved and protecting areas of deep soil for future planting.

Maintaining, enhancing and creating urban green space not only fulfils the requirements for urban acupuncture, but – to mix medical metaphors – provides a kind of urban vaccination against the emergence of slums, where nothing can grow and depression sets in.

We can combine building development with what Stefan Boeri Architects have described as “vertical densification of nature within the city” to achieve a new kind of urban nature – nature in the city to transform the nature of the city.