But from where should Australia launch rockets? Woomera in South Australia launched its first rocket in 1967, but in reality Australia could support multiple launch sites. And the closer to the equator, typically the better.

Let’s look at why.

Read more: No launch from Australia: something missing from our plans for the new space race

The first step in a space venture is to launch the payload (typically a satellite) and get it to stay in a suitable orbit without falling back to earth.

To achieve this, first the rocket must lift itself and the payload from the launch pad, through the lower levels of the atmosphere to altitudes greater than 100 km. This is achieved using a near vertical trajectory. 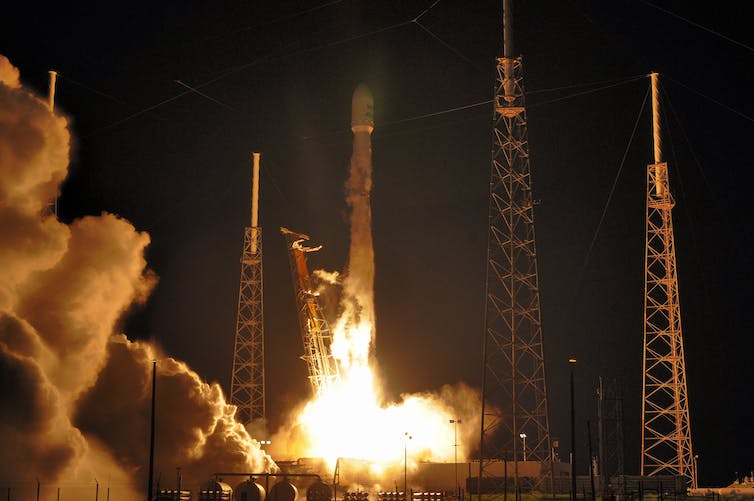 Once outside the atmosphere, the climb angle is reduced and the rocket starts to accelerate to reach its orbital velocity. It must travel at more than 7.8km/s (approx 28000 km/h) to stay in Low-Earth Orbit (LEO). LEOs are orbits with an altitude of less than 2000km, and are used by the majority of small satellites.

The majority of the rocket fuel is used in this acceleration phase. The high final velocity is required to ensure the released payload stays in orbit.

However, by appropriate selection of launch site and launch direction, the required velocity to achieve LEO can be reduced.

So, in the ideal case, launching eastwards from the equator, the velocity to stay in LEO is reduced from 7.8km/s to approximately 7.3km/s.

As fuel required to attain these speeds is proportional to velocity squared, this is a substantial saving.

This speed advantage is most important for spacecraft leaving earth and satellites going to geostationary orbit (a high earth orbit, where they rotate with earth and remain exactly above a fixed point on the ground). By launching from the equator in a purely eastward direction they can fully utilise this speed advantage.

However, for small satellites aiming for LEO this has limited value. They would circle above the equator and could only view (or be visible from) a strip several hundreds of kilometres wide.

Instead most LEO launches are slightly to the north or south of the equator, so that the resulting orbit is inclined relative to the earth equatorial plane. From these orbits, after multiple passes, most of the earth (excluding the north and south pole) is visible.

A good example of such an orbit is the International Space Station, which can be tracked at ISS tracker. 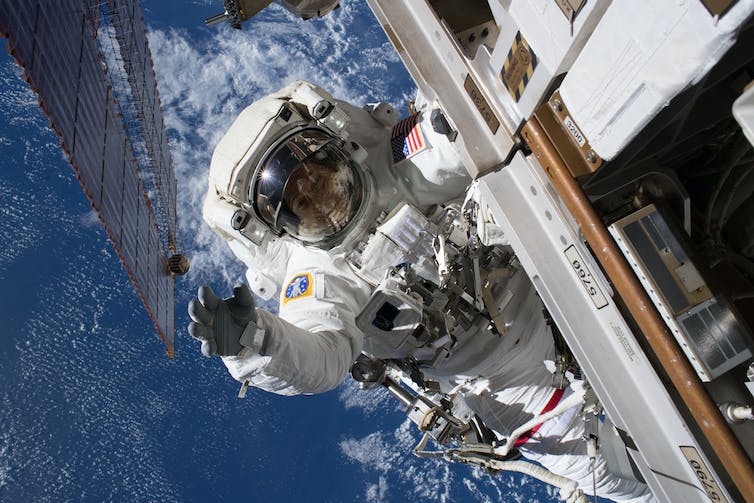 The exception to this are satellites in what are called sun synchronous and polar orbits, flying almost directly over the north and south pole. These require launches in the north or south direction and cannot utilise the speed advantage.

Read more: Elon Musk is launching a Tesla into space – here's how SpaceX will do it

The biggest motivator for building launch sites close to the equator is the the speed advantage and associated fuel savings mentioned above. Reductions in fuel mass allow increases in allowable payload mass.

This is reflected by the major well established spaceports: Cape Canaveral in Florida (USA), Baikonur Cosmodrome in Kazakhstan (Russia), Kourou in French Guinea (Europe), and Jiuqan (China) all of which are located in the vicinity of the equator.

Looking ahead, there will be significant demand for future launch capacity to LEO either on inclined or sun synchronous orbits, as they are easy to reach and well suited for observation and communication satellites.

Secondary considerations for choosing launch sites are weather and climate related. Obviously blue sky days with little wind are desirable for launching, but – as demonstrated by Cape Canaveral in Florida – it is possible to operate a space-port in a region regularly visited by hurricanes. Nevertheless NASA cites weather as one of the main causes for launch delays.

Finally, it is desirable for launch sites to be close to towns and cities so that people have somewhere to live, and so that launch sites can contribute to the local community.

Read more: The big global space agencies rely on Australia – let's turn that to our advantage

Australia has a rich heritage in space related innovation, research, and collaboration, dating back to the NASA Mercury and Gemini programs.

Today there are several home-grown start-ups developing launch capabilities for access to space, such as Hypersonix and Gilmour Space Technologies (plus Rocketlab in New Zealand), all specifically targeting small satellite launches.

An evolution from this would be an Australian space port, which would further spur on these developments and help grow Australia’s space industry.

So far the majority of rocket launches in Australia have been conducted at the Woomera Prohibited Area, located in South Australia. An advantage of Woomera is that trajectories initially run over land. This allows easier communications with the rocket or flight experiment, making it ideal for rocket development. But this isn’t essential in space launches.

Being a large country, Australia can accommodate multiple launch sites. Equatorial Launch Australia (ELA) recently announced that they have secured land to start construction of the Arnhem Space Centre in the Northern Territory in 2018.

Space launches from Australia can be expected in the not so distance future. Having a national launch capability will significantly boost the growing space and satellite industry.