Fewer gay and bisexual men are using condoms while taking PrEP, the antiretroviral pill that prevents HIV, according to research published today in the The Lancet medical journal.

An increase in condomless sex in PrEP users is predictable as preventing HIV is the key motivator for condom use among gay and bisexual men.

This will not increase HIV transmission among these men though, because PrEP is an effective HIV prevention agent, estimated to be 99% effective if taken consistently.

This finding is cause for concern as this same proportion of men remain at high risk of HIV acquisition.

And in social terms, information about sexual health and HIV risk from a casual sexual partner can’t be relied on in the same way it might be negotiated between people socially or romantically connected.

So men having sex with men should be using PrEP if they are engaging in casual sex without condoms. 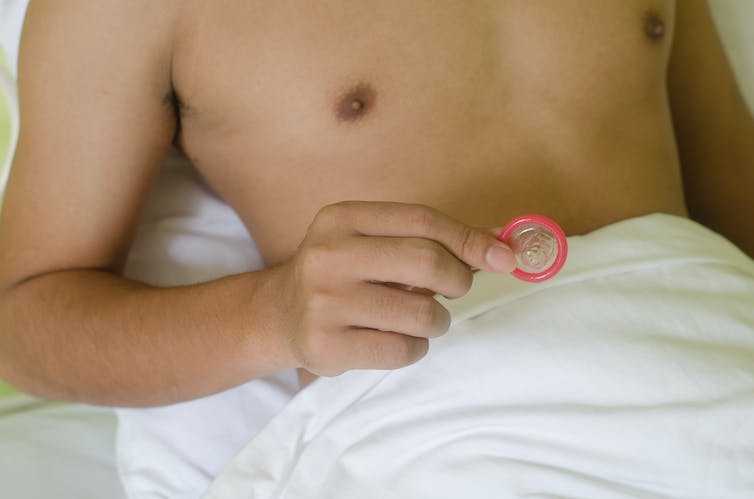 Condoms prevent many STIs, not just HIV. from shutterstock.com

NSW and Victoria have been running the largest and longest PrEP implementation trials in Australia. Around 15,000 gay and bisexual men have participated in these studies, and this has resulted in a rapid reduction in new HIV infections.

HIV notifications in both states are now at the lowest levels recorded since the beginning of the AIDS epidemic in the late 1980s.

In Victoria, infections among gay and bisexual men have reduced by 16% and in NSW by 11%.

Though, of course, condoms prevent many other sexually transmissible infections too, so are very good for sexual health both at an individual and community level.

Read more: Sexually transmissible infections on the rise in Australia: a snapshot

Condoms decrease sexual pleasure for many men, require an erect penis (which can be a problem when ageing, alcohol, or other drug use is involved), and need to be used correctly every time.

Further, the use of a condom is in the control of the insertive partner, given the lack of affordable and accessible receptive partner condoms in Australia.

My research shows some men on PrEP continue to use condoms in certain circumstances, such as when they’re not satisfied a prospective partner tests regularly for STIs and HIV.

So PrEP isn’t replacing condoms. But it is transforming HIV prevention in a positive way because it offers a new form of protection.

PrEP can be controlled by receptive partners, and taking it daily removes it from the direct sexual context, where the heat of the moment can interfere with rational decision making.

The key message from The Lancet paper is while an increasing proportion of gay and bisexual men are taking control of the HIV risk in a new, responsible way, there remains a small but stable proportion who are not taking that responsibility.

The study’s data was collected prior to PrEP becoming nationally available through the Pharmaceutical Benefits Scheme (in April 2018), so it is possible some men at risk could not readily access PrEP. Hopefully, nation-wide access will change this.

HIV prevention is not an either/or choice between condom use or PrEP uptake – both are integral elements. Condoms are an excellent tool for sexual health for anyone whose sexual practise involves penetration with a penis, but we also have to acknowledge their shortcomings, and that prevention of STIs alone may not be enough to motivate their use.

PrEP is highly effective but does not prevent STIs, and some individuals will not want to take a pill every day.

While use of PrEP and condoms together might be the optimal model for sexual health and HIV prevention, this is idealistic, and it remains completely unsurprising that PrEP uptake involves some decline in condom use.