Welcome to Beating Around the Bush, a series that profiles native plants: part gardening column, part dispatches from country, entirely Australian. Read more about the series here or get in touch to pitch a plant at batb@theconversation.edu.au.

The Indigenous people of Victoria and Tasmania have long known of the giant trees to be found in some of the wetter and cooler forests of these parts of Australia. The first Europeans were amazed to see trees of such stature growing in what they regarded as a dry and hostile environment.

The trees are straight and tall – almost incredibly tall – and many have massive girths. They are in every sense living giants.

Today we know the species by various common names, such as mountain ash, swamp gum, stringy gum or even giant gum, in different parts of Australia. Perhaps this is a situation where the proper botanical name, which many people find difficult and confusing, says it all. This monarch of eucalypts is officially called Eucalyptus regnans; regnans being Latin for ruling or reigning. Its massive stature gave rise to the name. 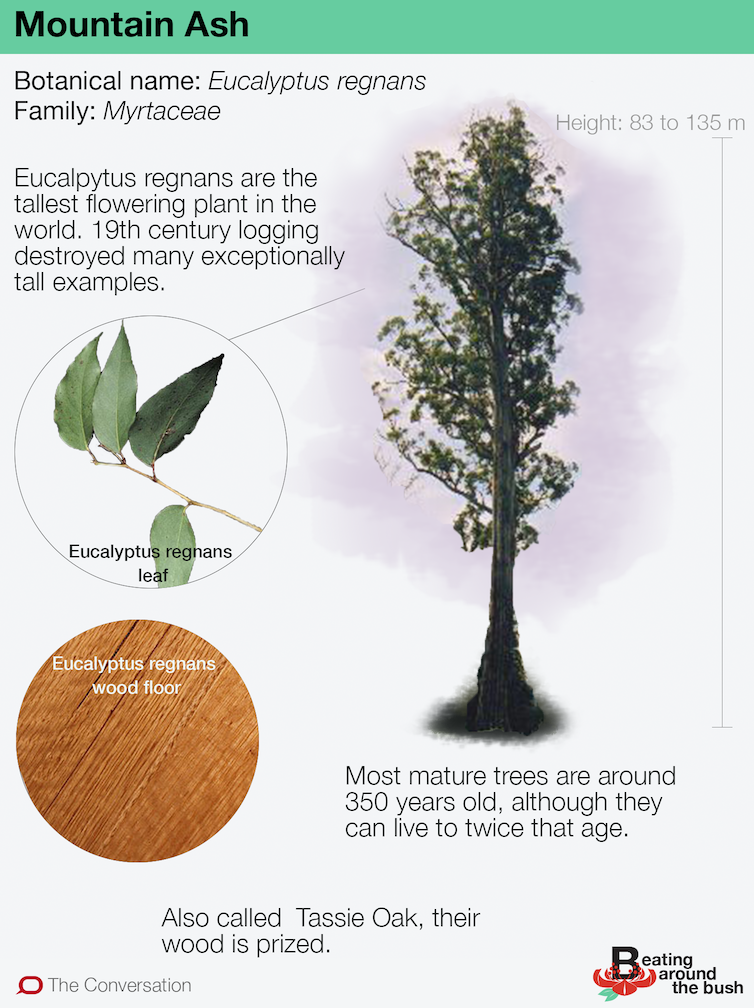 How does it grow? Mountain ash lack many of the typical eucalypt adaptations to environmental stresses like fire, drought and poor soils. They compensate by growing very fast under the right conditions; eventually over-topping all the other species present. They have huge and often deep root systems to supply adequate amounts of water. To grow successfully they need plenty of water and sunlight – so they are not really very hardy – but in the right environment they are unbeatable. They always grow tall and so are not for your smaller suburban backyard, but there are many in backyards in the Dandenongs, in peri-urban sites to the east of Melbourne and in towns in Gippsland and the Otways. Their mature leaves are about 3mm wide and can be as long as 150mm, while their flowers are white to cream in colour and 8mm across. The buds and flowers grow in clusters, but like the flowers of many eucalypts they often go unnoticed, especially on the taller trees. The fruits or gumnuts are again in clusters, about 10mm across and, somewhat surprisingly for such a large tree, contain hundreds of tiny seeds. The bark is rough and fibrous at the base and for up to about 10m from the ground, but then is a beautiful smooth, mottled cream and grey with long ribbons of dead bark hanging from the canopy. These ribbons burn in bushfires and can carry fire for many kilometres ahead of a fire. Read more: Curious Kids: Where did trees come from? A forest giant We will never know if a Eucalyptus regnans was the tallest living thing on Earth; they are certainly the largest flowering plants in the world. Many of the biggest were felled in the mid to late 1800s before they could be properly measured. There have been, and continue to be, a number of rivals for the tallest mountain ash; of course there have been the usual rivalries between states. Tasmania currently holds the record, but there are several tall specimens in Victoria that may take the crown in future. Some of these trees were so large that the stumps could neither be transported from the forest, nor processed in the timber mills of the day. These huge logs can still be seen rotting on the forest floor more than a century later. 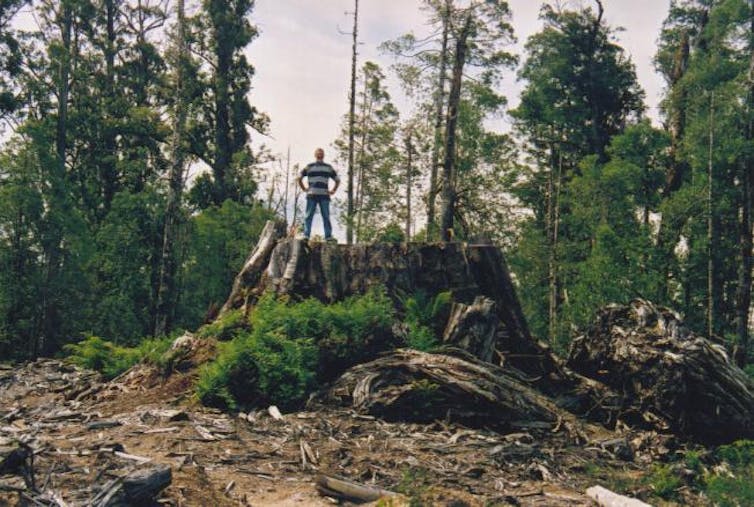 A stump of a Eucalyptus regnans in Tasmania’s Styx valley. TTaylor/Wikipedia, CC BY-SA These trees were so large, an old forester told me in the early 1970s, that when they felled them by hand with cross-cut saws, air could be heard being sucked into the cuts – the so-called sighing of the trees as they died. We do know, however, that specimens of Eucalyptus regnans regularly exceed 85 metres in height and that one tree was measured at 132m tall. Often they were measured after they had been felled and the uppermost branches (and sometimes the stump) were not included in the measurement. Today the tallest specimens are just under 100m tall and the biggest tree is 10.74m in diameter and 33.75m in girth (measured at 1.4m above the ground). They are second only to the coast redwood, Sequoia sempervirens, in height. For such mighty trees, it often comes as a surprise that they are not as old as many people think. While the coast redwoods can exceed 2,000 years of age, mature Eucalyptus regnans tree are commonly about 300 years old, but may reach about twice that age if they are growing in the right place to miss bushfires. Read more: Sandpaper figs make food, fire, medicine and a cosy home for wasps Vulnerable to fire Mountain ash are easily killed by bushfires. Although they grow in the cooler and wetter parts of southeastern Australia where fires are not so frequent, as time passes, a fire becomes inevitable. The fire kills the individual specimens, but at the same time rejuvenates and renews the forest. The mighty Eucalyptus regnans regenerates from the tiniest of seeds that are shed from the woody fruits that were present in the canopy at the time of the fire; seedlings often emerge about six months after a fire. When fires burn through Eucalyptus regnans-dominated wet forests most of the trees die, but those that don’t can be fire-scarred – often on one side. Over time these trees decay and then hollow out. Given their massive girths, they can develop huge cavities at the base and a hollow trunk leading upwards like chimney. As with other similar large-girthed eucalypts, Indigenous people used these trees as shelters. They weren’t the only ones: there are records of early settlers and timber cutters using these trees as their homes for families of seven or more people. 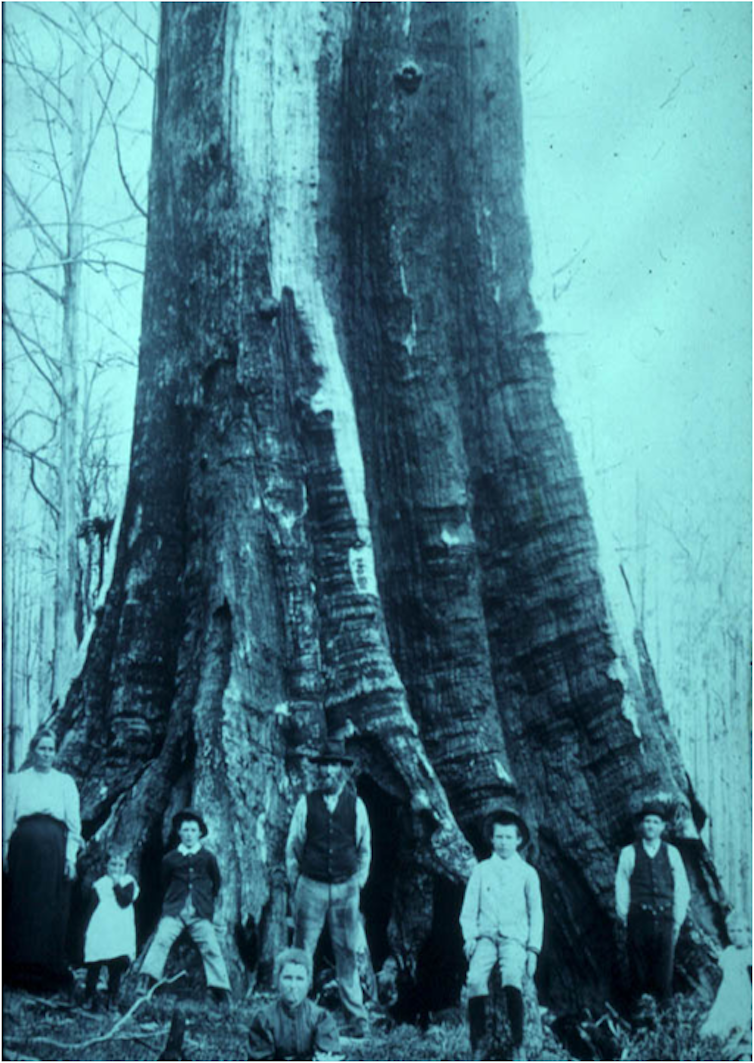 Hollowed-out mountain ash were used as shelters by settler families. State Library of Victoria The timber from Eucalyptus regnans reminded some people of European ash timber and hence the name mountain ash, while others thought it had properties as good as oak and so the name Tasmanian or Tassie oak was used for the timber. The timber is still highly valued today and Eucalyptus regnans is a common plantation species in Australia and overseas. In Victoria and Tasmania, Eucalyptus regnans forests are to be found within an hour’s drive of major cities, but in Melbourne, you can catch a glimpse of these magnificent trees and the forest over which they reign by visiting the atrium of the Melbourne Museum.