There are many factors that shape the value we place on different languages.

Some languages seem more pleasant to listen to, easier to learn or more logical. These perceptions are generally influenced by our attitudes towards the speakers of a language and the different situations in which the language is spoken.

One reflection of the differential status of languages comes through in bilingual children’s picturebooks. Here I explore how te reo Māori (the indigenous language of New Zealand) is represented and argue that the way languages are displayed in bilingual picturebooks can disrupt the status quo.

Read more: Why children’s books that teach diversity are more important than ever

As a sociolinguist, I am interested in the representation of languages in bilingual picturebooks. This not only reflects existing attitudes towards languages, but it can also be powerful in shaping future societal attitudes.

As well as telling a story or giving information, the presence of a minority language in a picturebook can serve a symbolic function. The way in which languages are presented in bilingual children’s books may encourage readers to value a language, or perhaps use this language more frequently, thus positively affecting its vitality.

To show the different ways in which minority indigenous languages can be featured in children’s picturebooks, I examine the linguistic landscapes of some Māori-English picturebooks that are disrupting the status quo of language hierarchies.

Linguistic landscape is a term used to describe the (usually visual) presence of different languages in public spaces. In my work with picturebooks I use this term to describe the space occupied by languages within a book. Language hierarchies relate to the idea that in any society some languages have more status than others.

I argue that these three factors are reflections of the relative status of languages in a bilingual picturebook and they subtly indicate to the reader which language is more important.

In Aotearoa/New Zealand the indigenous Māori language (te reo Māori) has official language status, but it is spoken by a minority of the population (3.73% of the total population and 21.3% of the Māori population). However, some bilingual picturebooks have opted to assign primary status to te reo Māori in terms of order and font size.

Children’s picturebooks are often underestimated, but some bilingual picturebooks disrupt the status quo and promote an alternative language hierarchy. 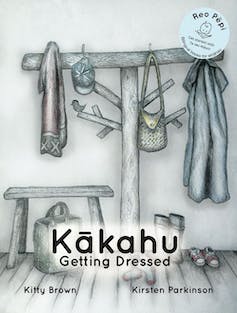 Reo Pēpi, CC BY-SA For example, Kākahu - Getting Dressed (Brown & Parkinson, 2015) is a board book in a series self-published purposefully by Reo Pēpi to encourage the use of te reo Māori with young children. On its front cover, the Māori word in the title (Kākahu) is much larger than the English (Getting Dressed). In the body of the book, Māori is privileged in several ways. Māori is given first on the page, with English underneath; Māori is presented in a much larger font size than English; and Māori is given in a bold typeface, whereas English is given in normal typeface. Te Wairua o Waitangi, which can be translated as “The Spirit of Waitangi”, is also part of a self-published series, written by Sharon Holt and designed to support teachers to bring te reo Māori into English medium classrooms via song. 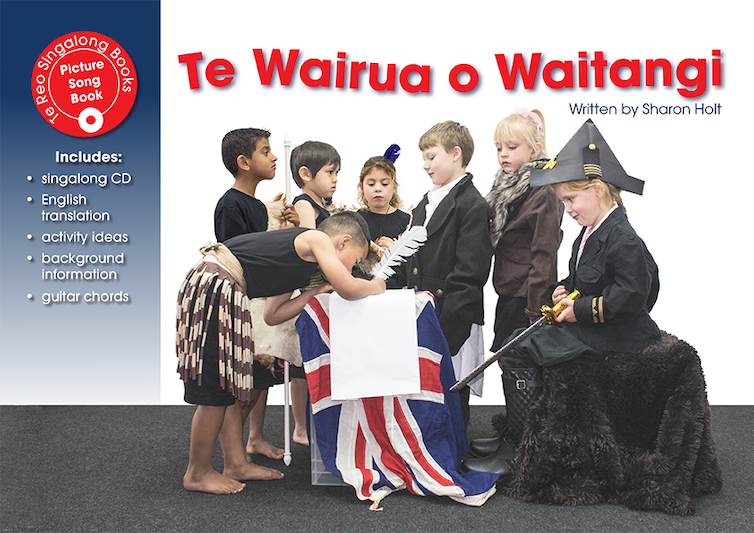 The cover of Te Wairua o Waitangi. CC BY-SA This book (and others in the Te Reo Singalong series) features a brightly coloured title in te reo Māori only. It is bigger and more bold than any other writing (in English) on the cover. The first few pages before the body of the story feature publishing information, a translation of the lyrics, and teaching notes for teachers in English. However, in the body of the book, only te reo Māori is used. At the back of the book, the lyrics for the song are given in Māori only with guitar chords. The picturebook includes a CD recording of the song, which also features a title in Māori and not English. The power of the picturebook The many different factors that influence the status of a language are often inter-related, but if a language is not valued, this may lead to people using it in fewer situations, and even to its eventual demise. The two picturebooks I have discussed illustrate how an often underestimated form of children’s literature can be used to support an indigenous language with a minority of speakers. Children and adults reading and listening to these books will see, albeit subconsciously, which language is being given higher status. In this way, new language attitudes are being formed and this may result in the adjustment of existing language hierarchies.