Yoghurt is one of the oldest fermented dairy foods in the world. Its origins date back to the dawn of civilisation. When humans began domesticating animals for milk production, milk’s short shelf life required solutions for storing it.

The word “yoghurt” itself comes from Turkish, meaning something like “curdled” or “thickened milk”, which is pretty much what happens to milk during yoghurt production.

Like milk, yoghurt is a rich source of calcium and protein. And it provides other nutrients such as iodine, vitamins D, B2 and B12, and zinc.

But yoghurt is actually more nutritious than milk. The main reason is that the fermentation process makes it easier to digest, so the nutrients can be absorbed more easily into the body.

Read more: From Bulgaria to East Asia, the making of Japan's yogurt culture

Yet with all the various types, like Greek and liquid yoghurts, and ones with added fruits and probiotics, how do you know which one is healthiest?

Usually, both these bacteria are present in yoghurt and form the yoghurt starter culture. Their synergistic relationship is a key factor in the consistency of the final product. These cultures may also provide some health benefits, such as reducing the severity and duration of diarrhoea. 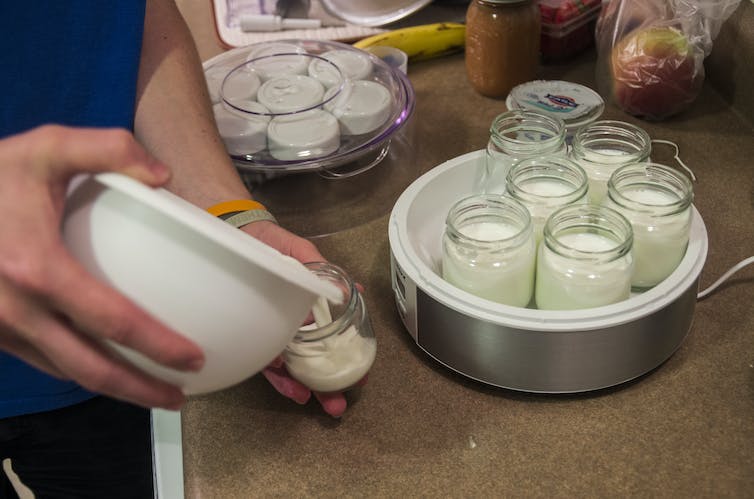 Yoghurt is made by introducing a starter culture of bacteria into milk. Andrew Seaman/Flickr, CC BY

The bacteria ferment the naturally occurring milk sugar (lactose) for energy and growth. During this process, lactose becomes lactic acid. The acidity development leads to the main milk protein, casein, breaking down and losing some of its elementary structure.

This partial breakdown results in the semi-solid, gel-like structure we know as yoghurt. The lactic acid is also responsible for yoghurt’s sour flavours, as well as helping it stay fresher for longer than milk.

Yoghurt is easier to digest than milk because enzymes involved in the fermentation process break down substances, such as lactose, into smaller compounds, which can be readily absorbed and used by the body. And certain minerals, such as calcium, phosphorus and iron, are better used by the body when they come from yoghurt.

And because lactose is broken down and converted to lactic acid during fermentation, lactose-intolerant people can consume yoghurt without adverse effects.

Consuming yoghurt is associated with many health benefits, including maintaining a healthy microbiota (the colony of bacteria in your gut). Yoghurt can feed the good bacteria and help them fight against disease-causing microorganisms.

Read more: Explainer: what is the gut microbiota and how does it affect mind and body?

Yoghurt consumption helps to maintain bone structure and has even been found to reduce the risk of certain cancers and infectious diseases, as it enhances the immune response. Yoghurt can help reduce symtpoms of conditions such as constipation, inflammatory bowel disease, infection with a bacterium that can damage the stomach lining (Helicobacter pylori), diarrhoeal diseases and some allergic reactions, such as to certain foods.

Cow’s milk is the most widely used raw ingredient for yoghurt manufacturing. But other types, such as sheep and goat milk yoghurt, are available. There are slight differences in the nutritional composition among these milk types.

Although cow’s milk is generally more appealing (as goat and sheep milk may have unpleasant smells), the latter two may provide additional health benefits. For instance, goat’s milk is easier to digest than cow’s milk and is less likely to cause an allergic reaction.

Non-dairy alternatives such as soy and coconut milk yoghurt are becoming increasingly popular too. 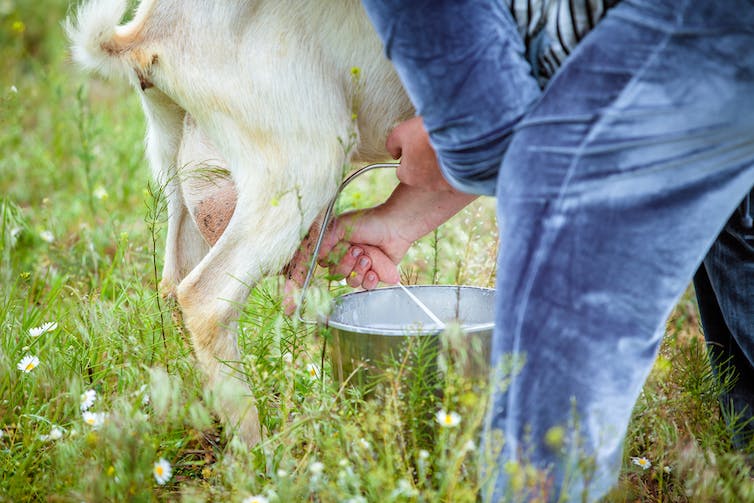 Goat’s milk is easier to digest than cow’s milk. from shutterstock.com

Plain set yoghurt is usually made from dairy ingredients and fermented in the cups or tubs with no sugar or sweeteners.

Flavoured yoghurt is made by adding sugar and fruit or other flavourings to plain yoghurt. Often, the milk mixture is fermented in large vats, cooled and then stirred for a creamy texture with various fruits or other flavours. These stirred yoghurts are also known as Swiss-style yoghurts.

Greek yoghurt is a thick yoghurt. It’s traditionally prepared by straining the water known as whey from plain yoghurt to make it thicker, richer and creamier. It contains more protein than regular yoghurt and has no added sugar.

Frozen yoghurt is frozen ice milk with a typical yoghurt flavour. It tastes more like ice-cream with a hint of yoghurt.

Drinking yoghurts are prepared from a yoghurt mix with reduced milk solids. They come in almost every variety and flavour. They’re usually more watery, but some thick varieties are also available. Kefir and lassi are the popular drinking yoghurt types.

Many yoghurts contain added ingredients. These include cholesterol-lowering compounds (such as stanol and sterol esters) and fibre aimed at improving gut health.

Some yoghurts also have added probiotics. These are live microorganisms that can help establish a healthy gut microbiota. The most widely used probiotics are the acidophilus strain, known as Lactobacillus acidophilus, and Bifidobacterium. These could be useful for people who have gastrointestinal problems such as irritable bowel syndrome (IBS).

Probiotics can be more effective when consumed in yoghurt than through capsules or other beverages.

Read more: So you think you have IBS, coeliac disease or Crohn’s? Here’s what it might mean for you

The two bacteria in yoghurt starter culture – S. thermophilus and L. delbrueckii ssp. bulgaricus – are not natural inhabitants of the intestine and cannot survive the acidic conditions and bile concentrations in the gastrointestinal tract. So they don’t do much to change the microbiota in your gut. In contrast, probiotics can survive and colonise the large intestine. 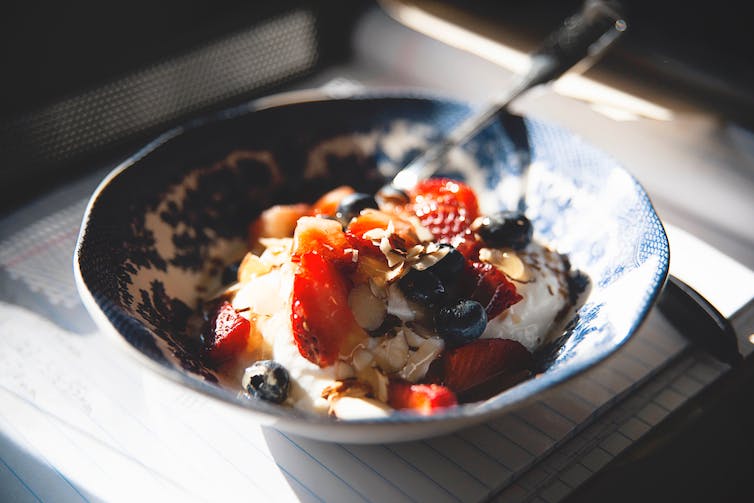 It’s healthier to add your own fruit to yoghurt than to buy fruity yoghurt. Peter Hershey/Unsplash

Regular intake of yoghurt that contains microbial cultures such as probiotic acidophilus has also been found to potentially reduce the risk of coronary heart disease by helping to decrease cholesterol absorption.

Which yoghurt is better for you?

High fat and high sugar in any food can lead to health problems. So, a low-fat and low-sugar yoghurt product, like a low-fat Greek yoghurt, would be ideal if you’re looking to keep healthy.

Yoghurt products incorporating fruit or nuts can provide additional nutritional and health benefits, but many of these can also contain added sugar. Adding fresh fruit or nuts to a yoghurt yourself is a healthier option.

If you would like to have probiotic effects, you can choose a product with acidophilus or bifidobacteria.

You should check the product label as it is a legal requirement to list all the ingredients, cultures and nutritional information in commercial yoghurts. When it comes to probiotic yoghurts, it’s always better to choose a fresh product rather than one closer to the expiry date, as probiotics die during storage.