Journalist Stan Grant argued this week in an article on the ABC that that we should stop talking about Meghan Markle being “mixed race”. Grant made the argument, which is often employed to discredit racial identities, that race has no scientific basis and therefore should not be used to put people into categories.

The problem with Grant’s position is that it is possible to adopt a racial identity without using the debunked scientific argument for race. Grant himself admitted that race matters because people are still seen as belonging to particular races: the fact that African American people in the US still suffer a number of inequalities is evidence of this.

People are read as African American, Aboriginal, or Asian because of the social construct of race. That makes race real to us. It’s possible for me as an Okinawan (Japanese) Australian to talk about how society categorises me according to my race without saying that race is a scientific reality.

The term “mixed race” is, of course, problematic for many Aboriginal people. This is no doubt due in part to the horrifically racist colonial history of attempting to “breed out” Aboriginality and divorce Aboriginal people from their heritage.

Demeaning blood quantums were used to categorise Aboriginal people’s supposed mixedness. There is obviously good reason for them to be suspicious of terms like “mixed race”. However, where does that leave those with other histories that need a language to describe their mixed roots?

Mixed race people can find themselves living between cultures. For people like me, this can mean explicitly or inexplicitly feeling that we are not white enough or not Asian enough. Growing up here in 1996, hearing Senator Pauline Hanson say that Australia was in danger of being swamped with Asians, made me feel an outsider in my own country. Yet in Japan, I was always considered a foreigner. 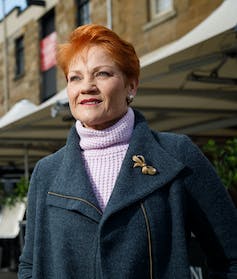 In her first parliamentary speech in 1996, Pauline Hanson warned Australia was in danger of being ‘swamped by Asians’. PETER MATHEW

This created a confusing, and sometimes painful, dilemma. Where did I belong? Was I white or Asian? There were few positive examples in the public sphere to show me that I could be both.

Many mixed race people with white heritage experience a devaluing of their ethnic backgrounds. Social norms tell us that it’s better to be white than ethnic. For instance, when Western popular culture overwhelming depicts lead characters in film and TV as white and often portrays people of colour in stereotypical ways, we internalise a hierarchy of race. This can mean that mixed race people learn to pass as white and hide their ethnic culture or identity. In some places, such as Japan, mixed race people suffer segregation, discrimination, and racist hatred.

A growing number of mix-raced people has led to talk of a “post-racial” era. This refers to the idea that one day everyone will become mixed - there will be no more race and therefore no more racism. Mixed race people are the poster people for this “raceless” future. But the consequence of this idea is that their experiences now are very rarely taken seriously.

What does it mean to be partly Asian and partly white in a country that, in various ways, reinforces the idea that white people belong and Asian people don’t? This is not about an oppression Olympics either: I’m not saying that mixed race people suffer more difficulties than others. I simply think that it’s worth talking about what it’s like to be us.

This is especially important because I grew up never seeing my experience reflected in the public domain. I suppressed my ethnic feelings and caved into the pressure to assimilate to white Australian culture. It wasn’t until my early-20s (at university) that I was given the tools to unpack this internalised racism. This led me to reevaluate my ethnic identity and take pride in my background, despite the pressure to conform.

We need to make sure there is space for ethnic Australians to freely express their identities, in any number of ways. It’s also possible to have a mixed race identity that doesn’t fall into exclusive categories (for instance, white or black). Expressing these identities, and talking about them openly, is the only way we’ll understand how race as an idea affects all of us.

I want to hear other mixed race Australians talk about what it means to them to grow up here, and if Meghan Markle offers one way of having that conversation, bring it on!