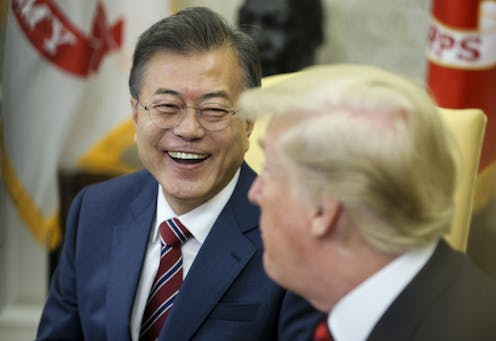 In the wake of South Korean President Moon Jae-in’s meeting yesterday with US President Donald Trump, it’s worth reflecting on the remarkable role he’s played in facilitating the opening for diplomacy that’s emerged this year between the US and North Korea.

During a tumultuous 2017 on the Korean peninsula, North Korea...

In the wake of South Korean President Moon Jae-in’s meeting yesterday with US President Donald Trump, it’s worth reflecting on the remarkable role he’s played in facilitating the opening for diplomacy that’s emerged this year between the US and North Korea.

During a tumultuous 2017 on the Korean peninsula, North Korea intensified its missile development program with 16 separate missile tests, and conducted its sixth nuclear weapon test, its most powerful detonation to date. For his part, Trump threatened to unleash “fire and fury like the world has never seen” and to “totally destroy” North Korea, insulting Kim Jong-un as “rocket man,” a “madman” and “short and fat” in the process.

He eventually redeployed the USS Carl Vinson aircraft carrier group to the Sea of Japan, as the drumbeat of war grew louder.

Read more: North and South Korea met - but what does it really mean?

It was a difficult environment for Moon to step into as the new leader of South Korea eager to pursue an agenda of rapprochement with the North. Yet Moon’s government has been able to craft a distinctive approach to engagement with an unpredictable leader like Kim and an American president who is equally erratic and deeply uncertain about his approach to North Korea policy.

Moon has made great strides in recent months, though we will have to hold judgement on the success of his approach until after Korea’s season of summits plays out.

A history of progressive politics

Moon Jae-in came from humble beginnings, born to a poor family who had fled the North during the Korean War. As a student at Kyung Hee University during the 1970s, he was involved in the emerging pro-democracy movement against the dictator Park Chung-hee. He also took part in Operation Paul Bunyan during his compulsory military service, the retaliatory operation to the infamous 1976 killings of two US Army officers by North Korean soldiers (known as the “axe murder incident”).

Moon eventually graduated from university and passed the bar exam in 1982, but was unable to advance in the judiciary due to his pro-democracy activist history. Through the 1980s, Moon partnered in a law firm with future South Korean President Roh Moo-hyun, specialising in human rights cases.

Moon’s relationship with Roh would later lead him into politics. He was an official in Roh’s presidential administration, during which time he oversaw the opening of the Kaesong Industrial Park in North Korea in 2004 and was involved in organising the 2007 inter-Korean summit.

Read more: As North Korea builds a season of summits, the stakes on denuclearisation remain high

Moon made the jump from government official to elected representative in 2012, when he was elected to the South Korean National Assembly. He later launched an unsuccessful campaign for president against Park Geun-hye.

He became chairperson of the New Politics Alliance for Democracy in 2015, which later morphed into the Democratic Party of Korea. Then, a year later, he rose to the forefront of the protest movement against Park and emerged as a leading presidential candidate following her impeachment.

He went on to comfortably win the May 2017 presidential election, pledging to revive the engagement strategies of the Sunshine Policy era and seek better ties with the North.

Moon has advocated for a firm but patient strategy in engaging with North Korea. In his inaugural address as president, he expressed a willingness to:

go anywhere for the peace of the Korean peninsula. If necessary, I will fly straight to Washington. I will go to Beijing and Tokyo and under the right circumstances go to Pyongyang, as well. I will do whatever I can to establish peace on the Korean Peninsula.

His enthusiasm for a more activist approach toward the North contrasted with the freeze in inter-Korean relations that had developed during the more conservative reciprocity-based strategy favoured by presidents Park and Lee Myung-bak.

Moon sees his engagement strategy as part of a broader push by South Korea to integrate Northeast Asia via the New Northern Policy.

The strategy is aimed at buttressing regional security through economic and infrastructure linkages, or “nine bridges” between South Korea and Russia in the form of gas pipelines, railway connections, seaports, regional electricity grid integration, Arctic shipping routes, shipbuilding, labour exchange, and the co-development of agriculture and fisheries projects.

Elements of the New Northern Policy emerged in Article 1.6 of the Panmunjom Declaration from the recent inter-Korean summit, which mentioned the potential opening of railway and road corridors across the DMZ between North and South Korea. These kinds of economic incentives may be highly attractive for North Korea as it pursues its Byungjin development model (simultaneous nuclear weapons proliferation and economic development).

Despite taking a firm line on sanctions against North Korea following Pyongyang’s latest nuclear test, the Moon administration capitalised on the auspiciously timed Pyeongchang Winter Olympics to open a new line of communication with the North Koreans. This bought much-needed time for diplomacy as tensions between the US and North Korea were reaching a boiling point.

Since then, the South Korean government has been subtly attempting to corral the Trump administration into an engagement track with Pyongyang as well. Moon has taken every chance to praise Trump for making the US-North Korea summit possible, and in recent days has tried to smooth over tensions to keep the summit on track after Kim threatened to pull out.

By accident or design, the Moon-Kim summit last month and proposed Trump-Kim summit scheduled for next month have opened a window of opportunity to move away from the status quo toward a permanent peace on the Korean peninsula.

While Trump and Kim will inevitably grab all the headlines, Moon has been a pivotal actor in this drama. His activism in engaging the North has helped to make it politically safer for the Trump administration to negotiate with Kim, a prospect that was unthinkable only months ago.