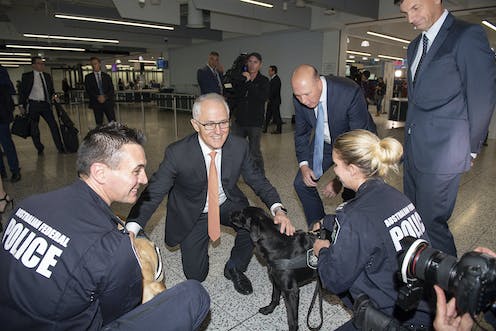 Last week, the federal government announced new powers allowing police to stop people at airports and demand identification. When asked to justify such random checks, Prime Minister Malcolm Turnbull replied simply: “dangerous times.” At a later press conference he added, “the justification for changing the laws … is the safety of the Australian people”.

While one can concede the perennial danger of a domestic terror attack is with us constantly, the evidence is not clear that random identification checks at airports, or anywhere else for that matter, will prevent or deter a terrorist act.

Before looking at the evidence, we need to review just who is tasked with the policing roles at airports, and what powers currently exist.

Security at Australian airports is managed primarily by the private security staff who are contracted to operate the scanners and random explosives testing machines with which we are now very familiar. But the power to arrest people is the preserve of the Australian Federal Police (AFP). They can be seen, from time to time, patrolling the walkways and corridors of our air terminals.

Read more: Trust is the second casualty in the war on terror

Under the law, an AFP officer can only request identification if he or she suspects a person has committed, is in the act of committing, or is about to commit a serious offence. A serious offence is one punishable by a sentence of imprisonment of 12 months or more. The power does not extend to asking people at random to produce identification. A citizen being asked, for no good reason, to produce identification is a practice more aligned with authoritarian regimes than with parliamentary democracies.

But this begs a number of questions: why would an officer simply remove someone from the terminal and not arrest them? If the inquiry is such that a real concern about a potential threat has been raised, why wouldn’t the powers that currently exist simply kick in?

And what happens to the businesswoman who has been drawn to police attention by a loud, curt word to a security staff member but who has left her driver’s licence home and is about to miss her plane? It is all very odd.

This would be all well and good if there was any evidence that the new random identification checks would achieve what they set out to achieve. Sadly, the evidence points in the opposite direction.

Random stopping, questioning and demanding identification carries with it the risk of racial and social profiling, which brings with it public disquiet, if not anger. A white, well-dressed person is far less likely to be stopped at random and asked to explain themselves than, say, a non-white person wearing religious dress or in shabby attire.

If that type of profiling occurs over and over, police quickly lose their “legitimacy”. According to research, people are more likely to obey the law if they believe the police are behaving legitimately: that is, in a fair and procedurally correct manner, not an arbitrary one. If we want to foster good public perceptions of police, we should encourage police practices designed to engage rather than those likely to enrage.

Allied to this is the abundant evidence that the most effective anti-terror intelligence-gathering comes from members of the community providing information to police. If that community loses confidence in the police, then the well-spring of potentially significant information quickly dries up.

Legitimacy theory states that policing will be most effective when police officers set out to explore and understand the intrinsic and internal motivations that shape a citizen’s desire to cooperate voluntarily with them. The testing of this theory is now well underway in Australia and the results are favourable. As Barkworth and Murphy write:

By engaging with the public in a polite, respectful, and empathetic manner, police officers will be able to reduce negative sentiments and emotion directed at them, thereby increasing people’s willingness to comply with them both immediately and in the future.

Read more: Body-worn cameras will help reduce police use of force, but the problem runs much deeper

In other words, random identification checks, should they be implemented, have the potential to build resentment. Resentment slows down the rate of information flow. No new policy or practice will ever work if it fails to win hearts and minds.

This is a policy that has very little to commend it. Indeed, we need to ensure we do not sacrifice our freedom to go about our business without interruption in the pursuit of a goal that is at best ineffective and at worst counterproductive.

Policymakers need to keep this in mind as they review and evaluate the implementation of any new practice. They must ensure it does what it sets out to do, in a manner that is justifiable – on criminological and legal grounds – and acceptable to those to whom it applies.

To paraphrase former Prime Minister Robert Menzies, the greatest tragedy that could overcome a country would be for it to implement a policy in defence of liberty and to lose its own liberty in the process.