Basket weaving. It doesn’t sound much of an insult does it? But Education Minister Simon Birmingham appeared to use the term in this way in an interview following opposition leader Bill Shorten’s budget reply speech. Birmingham reacted disdainfully to Shorten’s commitment to fund fees for TAFE students, sneering at Labor’s “disastrous VET FEE-HELP program that subsidised everything from energy healing to basket weaving.”

Shadow treasurer Chris Bowen described this comment as an insult to TAFE teachers. Bowen is right, of course. But more than that, this insult derives its power from denigrating and trivialising crafts traditionally practised by women. By extension, it denigrates women themselves.

It calls to mind a similar jibe delivered by home affairs minister Peter Dutton during the gay marriage debate in March last year, when he told leading Australian company CEOs who urged government action on the issue to “stick to their knitting”. Three days later, Greens senator Janet Rice pulled out her knitting and worked on a rainbow-striped scarf during question time.

Read more: Craft in Australia: let's not forget the real value of the handmade

Why is it that when dredging for an insult, male politicians turn to traditionally female crafts? It seems their gendered nature, pigeonholed as women’s hobbies - mundane and domestic, unpaid and undervalued - makes them suitable targets for ridicule. We don’t see such sneers at woodwork, metalcrafts or other “manly” pursuits.

Oppressive attitudes towards women have engendered such characterisations of their leisure pursuits. In 1986 feminist theory pioneer Sandra Harding wrote: “In virtually all cultures, whatever is thought of as manly is more highly valued than what is thought of as womanly”. More than 30 years on, the insults from Birmingham and Dutton illustrate that this view is as pertinent today.

Birmingham’s comment also marginalises and undermines the merits of the highly skilled craft of basket weaving, which has a rich history, including in Aboriginal culture. Created with extraordinary dexterity and patience, items that once served utilitarian purposes, such as carrying food or even babies, are today preserved as museum pieces. 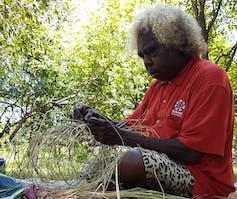 Traditional Owner Patsy Raglar weaving at the inaugural A Taste of Kakadu food festival in the Northern Territory in 2017. PARKS AUSTRALIA

Such weaving “expresses cultural identity and traditions that date back tens of thousands of years”, the Australian Institute of Aboriginal and Torres Strait Islander Studies says. Baskets carried by figures and ancestor spirits have been depicted in Arnhem Land rock art dating back more than 40,000 years.

Home to some of Australia’s finest fibre works, the Maningrida region’s Arts and Culture website notes: “There are also spiritual dimensions to weaving, which vary according to the materials used and the totemic significance of the object made.”

Curator Dr Kevin Murray, former artistic director of Craft Victoria, now an adjunct professor at RMIT University and editor of online craft publication Garland, reacted angrily to Birmingham’s insult. “Sure, basket weaving can thrive in Australia without TAFE support, but we need to address the way it is often demeaned as an art form by men in suits. What’s more meaningful: adding up figures in a spreadsheet or weaving objects for people to use that reflect a relation to the land and tradition?” he posted on the Craft in Australia Facebook page.

Two days later on that page, the World Crafts Council – Australia posted a notice of the National Basketry Gathering 2019 in South Australia with the comment, “Basket-makers stand proud!” 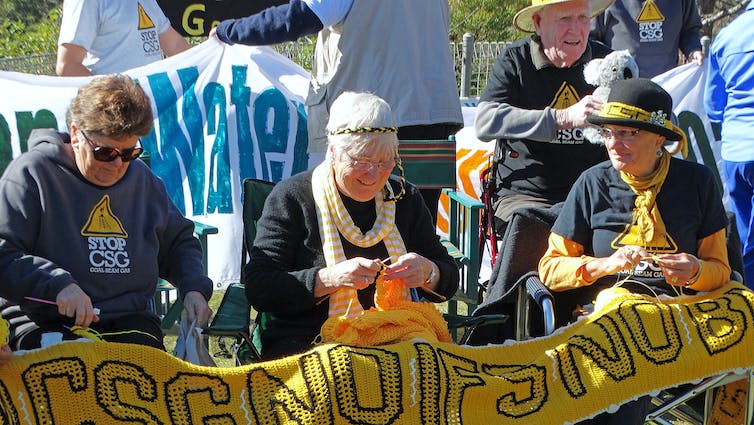 The inference attending the Birmingham insult is that basket weaving is a waste of money, while Dutton’s message is essentially that the CEOs should mind their own business and concentrate on what they know.

Many women are very familiar with the message of “don’t bother your pretty little head with that”. Yet crafts are increasingly recognised as appropriate subjects for scholarship. Finnish design scholar Maarit Makela has noted that “the making and the products of making are seen as an essential part of research”. They are “strongly connected with the source of knowledge. In this sense we are facing the idea of knowing through making.”

Read more: Knit one, purl one: the mysteries of yarn bombing unravelled

Also worth noting is that a significant body of research has confirmed what crafters have long known – that their crafts have mental health benefits. Craft has been found to enhance wellbeing – indeed some psychologists prescribe knitting for their patients.

Crafts also promote social connections, a counter to the loneliness and social isolation of contemporary life. Even trauma can be eased by participating in them, researchers have found. “The analysis revealed that feelings of agony or pain could be pushed away and turned into bodily activity or symbolic imagery by hand work,” writes Finnish researcher Professor Sinikka Pollanen.

Increasingly, craft practitioners are using their skills for other purposes than the purely decorative or utilitarian. They are actively protesting aspects of society – the Knitting Nannas who oppose coal seam gas exploration or yarn bombers enhancing desolate urban landscapes, for example. While some men are using craft to buck the gender stereotypes, for activist women it’s a means of drawing attention to and rebelling against the restrictions placed on them because of their gender. The message: craft matters; we matter.