Recently, author and speechwriter Don Watson has questioned the impetus for Australia to become a republic. In the April edition of The Monthly, he wrote:

In a world filling with tyrants, Queen Elizabeth and her descendants represent a sort of anti-tyranny.

He goes on to note:

Our democracy works imperfectly well, and it is hard to see how any of its practical imperfections would be remedied by going republican.

In effect, the governor-general, who is appointed by the elected government, acts as a de facto ceremonial head of state, while we maintain the pretence that Elizabeth is the sovereign.

Like Watson, I have come to rather like the absurdity of our constitutional arrangements. By separating the ceremonial and the actual power of government, there is a check on the egomania of politicians, who are not sheltered from the real world to the same extent as are royalty.

Read more: Nine things you should know about a potential Australian republic

At a time of increasing pessimism about the state of politics, it is worth asking whether we in fact need the absurdities of constitutional monarchy to preserve liberal democracy. Even to pose the question is to risk being assailed as reactionary and on the side of privilege.

But we need to distinguish between the pomposities of the extended British royal family, or deference to the Thai monarch, and the real purpose they serve as checks on untrammelled authoritarianism.

In Britain and the old dominions, the royals are more popular than ever. Republican Prime Minister Malcolm Turnbull fights for photo ops with Prince Harry and his fiancee Meghan Markle. When I asked a Canadian friend of mine about support for a republic in that country, he said the idea would be laughed off as irrelevant.

Jeremy Corbyn has had to deny claims he would seek to abolish the monarchy, which even the British Labour left accepts would be deeply unpopular.

Meanwhile, the 15 Commonwealth countries that retain the British monarch as head of state — including small Caribbean and Pacific island states — seem uninterested in changing the status quo.

The republican debate has no implications for our membership of the Commonwealth. The majority of Commonwealth countries are republics, although some have their own monarchical systems: in the case of Brunei and Swaziland, with near-absolute powers. So much for protestations of shared democratic values from Commonwealth leaders. Malaysia, Tonga and Lesotho are also monarchies.

It is tempting to dismiss the whole concept of monarchy as an absurd and offensive relic of feudalism, and the panoply that surrounds monarchy is indeed ludicrous. Supporting monarchies is expensive, and if I were a British taxpayer, I would be concerned about the size of the extended royal family.

But, on balance, those countries that have developed constitutional monarchies rank among the most democratic and egalitarian: the Scandinavian and Benelux states all have hereditary heads of state. 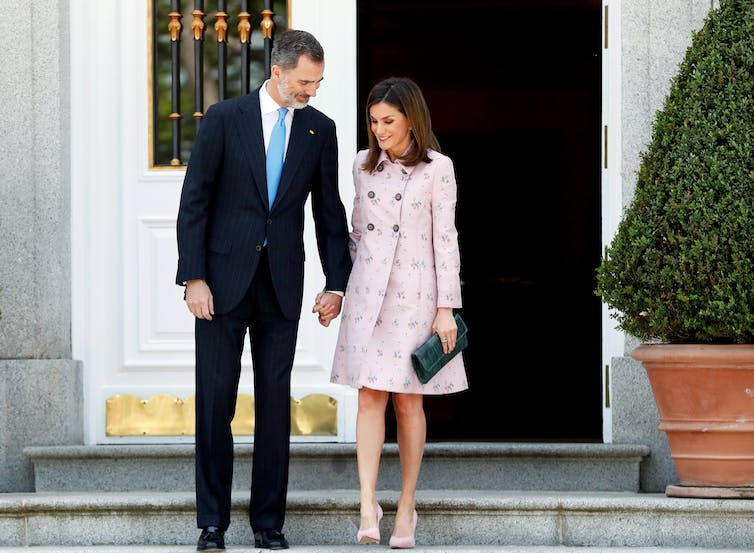 Spain’s King Felipe VI and Queen Letizia. In Spain, the monarch has played a crucial role in times of national crisis. AAP/Chema Moya

In Asia the picture varies: Japan and Thailand are both constitutional monarchies, although the role of the monarch in Thailand is clearly significant. And in Spain, the monarch has played a crucial role in times of national crisis. Recently, he has spoken out strongly against Catalan independence, in contrast to Queen Elizabeth’s silence on both Scottish independence and Brexit.

Across the troubling, authoritarian Arab world, monarchies are sometimes more liberal than republics: both Jordan and Morocco display some feature of constitutional monarchy. Saudi Arabia and the Emirates are remnants of the worst sorts of absolutism.

Writing 150 years ago, Walter Bagehot identified the advantage of separating “dignified” and “efficient” power. Drawing on Bagehot’s analysis, one might suggest that constitutional monarchies are a necessary antidote to the ambitions of politicians.

It is more difficult to imagine a Donald Trump, a Rodrigo Duterte or a Viktor Orban coming to power in a genuine constitutional monarchy, although perhaps Thaksin Shinawatra’s success in Thailand is a counter-example. Exactly what is the real role of the Thai monarch is shrouded in deliberate mystery, maintained by very strict prohibitions on free discussion within Thailand.

Read more: First reconciliation, then a republic – starting with changing the date of Australia Day

There are countries, most notably Switzerland, perhaps Ireland, where the absence of monarchy does not impel politicians to become too magisterial.

But the more likely course is that power inflates in proportion to the lack of checks: the need for a Spanish or a Norwegian prime minister to regularly account for themselves to a monarch has important consequences, even if the monarch’s influence is indirect and not divulged.

Were politics rational, we would abandon our double-headed head of state and retain the governor-general but with the title of president. But politics are rarely rational, and would a purely symbolic change be worth the effort?

Given the Australian governor-general is appointed by the government of the day and, since Sir Isaac Isaacs took the role in 1931, has usually been an Australian citizen, it is difficult to argue that no Australian can aspire to be head of state.

There is a powerful case for rethinking the Australian Constitution, in particular to include recognition of Indigenous Australians and establish a bill of rights.

Taking the queen’s image — or that of her son — off the five-dollar note is insignificant in comparison.