Housework is often understood as a gendered negotiation based on the traditional roles of homemaker (feminine) and breadwinner (masculine). While gender norms have shifted dramatically in the past few decades, theories of housework are still stuck on this 1950s model.

Shifting family structures, including the rising number of same-sex marriages in recent years, mean our understanding of housework needs updating. In our recent study, we highlight that current theories of housework do not adequately address dynamics in same-sex couples.

We present our own approach, arguing that all couples adopt different roles at different life points, and some reject traditional gender identities altogether.

Simply, there is no single way to explain the role of gender in housework. Our theories and data analysis need updating to account for the more diverse ways people behave as men and women in both same-sex and heterosexual relationships.

Existing theories of housework argue that domestic labour is one way to perform gender for oneself and one’s partner within heterosexual couples. The basic assumption is that individuals are socialised from birth into gender roles that dictate appropriate feminine and masculine behaviours.

Traditional gender roles teach young girls that women are responsible for the physical and mental work of ensuring household chores are completed. By contrast, breadwinner roles teach young boys that masculinity is tied to providing for the family economically. 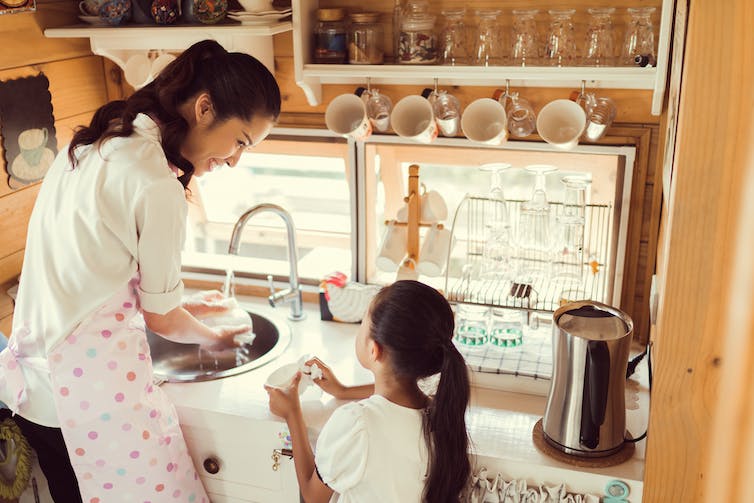 Feminist literature has challenged these ideas, arguing that domestic and economic work should not be distributed based on gender.

Young people today are more likely than older generations to reject traditionally gendered expectations in favour of more equal divisions of paid and domestic work. Yet we know that gender remains a major factor in unpaid divisions of household labour.

Research shows that same-sex couples have more equitable divisions of housework than heterosexual couples, but the partner who engages in more childcare also does more “feminine” housework tasks. However, the question of how to explain these divisions remains.

Existing theories assume same-sex couples either behave just as heterosexual couples, with one specialising in the home and one in the workforce, or do not divide housework by gender at all.

One argument is that same-sex couples are able to negotiate housework in the “absence” of gender. As the argument goes, one partner does the washing, dishes and vacuuming not because they are male or female but because they prefer these chores, have less money or spend less time at work. 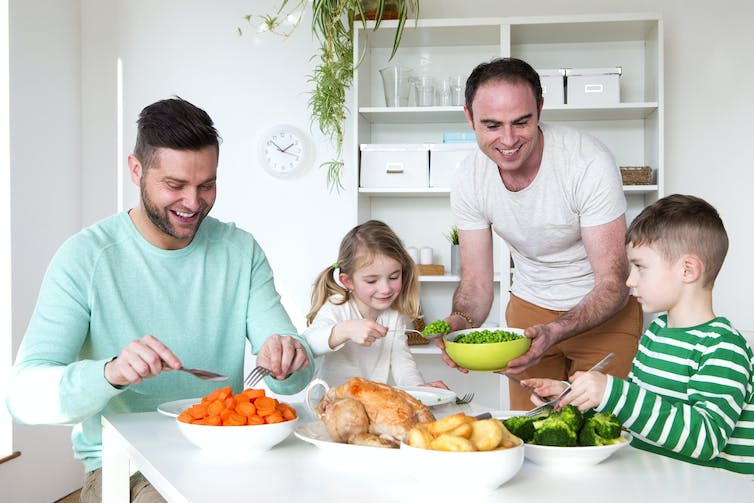 However, we argue that same-sex couples’ housework divisions and relationship dynamics may function in more complicated ways, rather than simply doing or undoing heterosexual gender dynamics.

Women, regardless of sexual orientation, may view a clean and well-dressed table as one way to be a “good” woman. But, for others, housework may tap into more nuanced gender relations. For example, resisting the urge to constantly tidy up after children and partners may, for some women, be a form of feminist rebellion, a challenge to patriarchal norms.

Same-sex couples may have more scope to engage in a greater diversity of housework tasks, without the boundaries of heterosexual norms of “feminine” and “masculine” chores. But their performance of these chores is often interpreted through traditional gender norms (for example, gay men clean, cook and decorate as a sign of femininity) that have homophobic connotations.

To fully explain the way same-sex couples might negotiate housework, we need to leave our old theories of gender behind.

Take two examples. The idea that men using power tools to feel a rush of masculinity is evident in our cultural narratives. Similarly, the notion that women bake cupcakes to shower their families with feminine love is also ingrained in our traditional gender norms.

If we switch the genders here – have women use power tools to be feminine and men bake cupcakes to be masculine – we can see that the logic of these theories falls flat. Of course, men bake and women use tools, but how these tap into gender identities is lacking from existing research.

Men may bake to show care for their partners and this action may tap into other dimensions of masculinity (such as caring and nurturing). Gay men may engage in baking and lesbian women in using power tools as a way to tap into different dimensions of their masculinity and femininity (such as care or empowerment), not to demonstrate their rejection of either gender identity.

Or, housework may have less to do with gender among modern heterosexual and same-sex couples and more to do with preferences, leisure and relaxation.

Read more: Roses are red, violets are blue, I'll stay forever if you scrub out the loo

Within same-sex couples, housework is less likely to be a source of patriarchal domination, but that doesn’t mean gender is absent from negotiations. Today’s adults were raised in the context of our society’s gender norms, and being in a non-heterosexual relationship requires a re-evaluation of these norms.

This can create flexibility in how gender is expressed to the outside world, to people’s partners, and to themselves. And identifying to what extent gender remains coupled to inequality is important, especially given that housework inequality jeopardises relationship quality regardless of sexuality.