One of the biggest reveals of Facebook’s F8 developer conference so far has been that it is planning on getting into the dating game. The announcement was made during Facebook CEO Mark Zuckerberg’s keynote address on day one.

It came amid news that Facebook’s VR headset Oculus Go is now available for purchase, that Messenger is getting a revamp, and that Instagram will introduce video calling features in the style of Skype and WhatsApp.

Read more: No, opposites do not attract

But Facebook’s dating feature had the most discernible impact, with stock for rival dating service Match Group (Tinder, Match, OK Cupid, and Plenty of Fish) falling more than 20% in the aftermath of the announcement.

Here’s what we know so far about the feature, which Facebook will begin testing later this year. 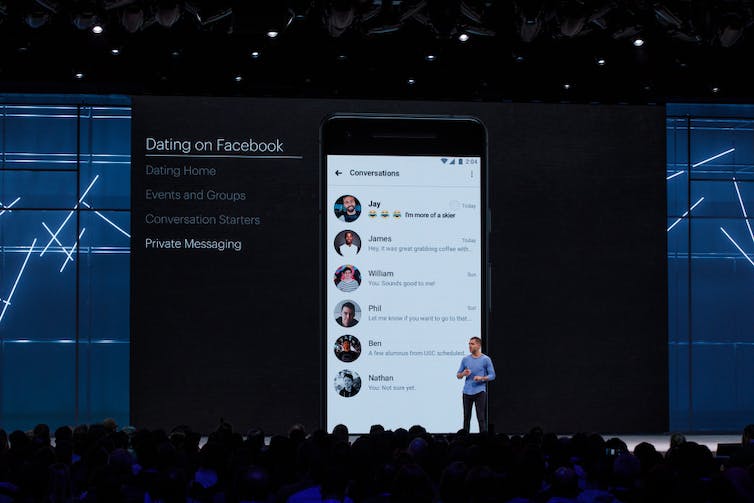 Users can browse through people’s profiles, which will contain basic information and a few photos. Here, the real power of Facebook Dating comes into play – you are shown people based on mutual interests, such as pages, groups and likes.

You can also browse events and groups in the feature. If any pique your interest, you can select to unlock, and see others who unlocked the same event or group.

Although we don’t yet know how mutual interest will be indicated, once this happens Facebook Dating will offer you the opportunity to start a conversation, which will take place separately from WhatsApp and Messenger (both currently owned by Facebook).

One attractive component of Facebook Dating will no doubt be the ability of the feature to filter and match users based on mutual interests. To some degree, all online dating services use filtering, though the amount depends on the service.

Tinder, for example, allows users to set some basic filters on potential matches – age, gender, and location. Some services, such as Plenty of Fish, offer features such as the POF Relationship Chemistry Predictor, which measures five broad dimensions of personality.

Users can then access these results when searching profiles – Wow, Glenn also prefers reading a book to going to a party. However, there is no requirement to complete this assessment, and no filtering occurs on the basis of your answers.

Other online dating services, such PerfectMatch and eHarmony, have a different approach to matchmaking. These sites promote “the science of love”, using algorithms to match users on provided data. For example, upon registering eHarmony requires all users to complete a personality test, and then uses these results to suggest potential matches to users.

Is there such thing as a ‘science of love’?

In 2010, researchers assessed 417 married couples from a variety of locations, who initially met via eHarmony and had later married. Although results of the study indicate that similarity in psychological characteristics may benefit relationships, there was no evidence to indicate this benefit was a direct result of using the eHarmony algorithm.

In 2009, a study of 2,124 couples matched on eHarmony completed an online questionnaire assessing personality, affect and values. The authors claimed that results showed support for matchmaking based on data, with marriages resulting from this method having significantly higher marital adjustment scores.

However, one glaring limitation of both studies is that the researchers were employed by eHarmony, and the need for independent research is unquestionable.

It would appear that despite the claims of these online dating services – based on surveys and limited in-house testing – there is a significant lack of independent scientific research. Regardless of what these sites promote, there is very little scientific evidence that using self-report collected data for matchmaking can lead to long-term compatibility.

Independent scientific research has already shown Facebook digital footprints – such as status updates and likes – are powerful predictors of private traits and attributes. Studies have shown that this kind of data can predict political affiliation with 85% accuracy and ethnicity with 95% accuracy.

Using data based on actual behaviour, such as Facebook statuses and likes, diminishes the potential for biases that occur via self-report assessments, such as inflated self-presentation. This could have significant connotations for dating via the use of such Facebook data – assuming that the Facebook self is an accurate reflection of the actual self.

Read more: Yes the 'cheerleader effect' is real – and you can make it work in your favour

Finally, there is evidence that personality assessment based on Facebook likes is more accurate than equivalent assessments made by human beings.

With such research evidence supporting the ability of Facebook to make accurate predictions about private traits and attributes, it seems logical the next step is to use such data to match individuals looking for love.

Despite these advantages, there are significant privacy concerns. In light of the Cambridge Analytica scandal, can privacy and confidentiality of personal information shared on Facebook really be guaranteed?

CEO Mark Zuckerberg says Facebook Dating has been designed with privacy and safety in mind, however, it is currently unclear exactly what those privacy and safety features will be. Some privacy experts believe it might not be possible to guarantee data protection at all.