Avengers: Infinity War has burst into cinemas, bringing together a vast array of Marvel characters. It has had a record opening weekend at the US box office, and is expected to be one of the highest grossing films of all time. Indeed fantasy and science fiction films feature prominently on the list of all-time biggest blockbusters, with the two previous Avengers’ movies, and Black Panther, sitting in the top 10.

Yet, not all are happy with this trend. In January, Jodie Foster, said of superhero films such as those made by Marvel and DC:

Studios making bad content in order to appeal to the masses and shareholders is like fracking — you get the best return right now but you wreck the earth…. It’s ruining the viewing habits of the American population and then ultimately the rest of the world.

I have written previously about the power of science fiction, especially Star Wars, to offer audiences a sense of transcendence and mystery, a moral compass and even hope for some kind of “salvation”. Like Star Wars, superhero films such as the Avengers franchise offer an integrated mythology that engages the viewer imaginatively, cathartically and transcendentally. They even do so with humour. 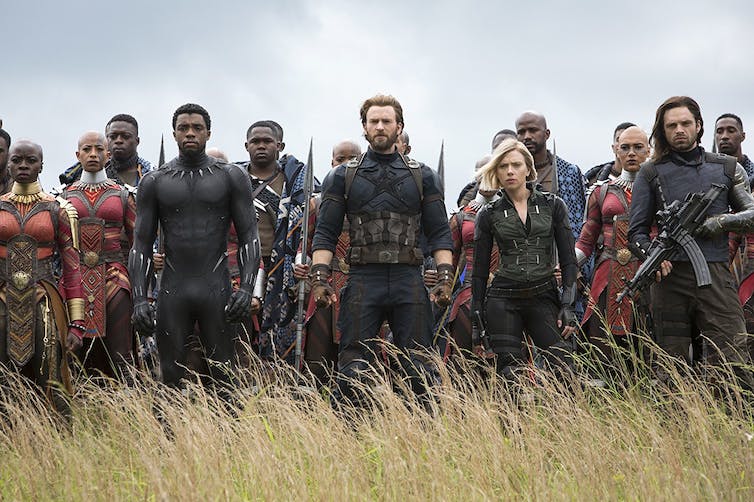 The literary-critic René Girard has argued that it is possible to read great literature, such as Shakespeare, on two levels. On one, there is action and violent spectacle. On the other, there are more complex themes, which include an implicit critique and exposure of the dynamics underlying the violent spectacle. Likewise, many of the best films appeal to multiple audiences at the same time. While I am not equating the superhero genre to Shakespeare’s works, Girard’s schema can be helpful to analysing these films’ appeal.

In Infinity War, the 19th film produced by Marvel Studios, dozens of Marvel superheros are united to fight a galactic enemy, Thanos. They include Captain America, Iron Man, Spiderman, Black Panther and many others. Marvel’s competitor DC has also made its own superhero films such as Batman v Superman, Wonder Woman and Justice League. The competition for superhero supremacy is intense, and involves a lot of money.

In Infinity War, Thanos wants ultimate power to restore balance to the universe. This involves killing half of the universe’s living population. On the surface, the tale can be viewed as a simple one of goodies-and-baddies, complete with an inter-galactic spectacle.

But there are deeper themes. Through Thanos, the film explores ideas such as the value of life, what’s morally permissible, utilitarianism, environmental ideology, and sacrifice. In a sense, Thanos is selfless – he is seeking a higher good for the universe, not himself - and offering a systematic answer to the problem of sustainability.

The question is: what do the Avengers offer? Hence the film flips the good-bad dichotomy, challenging the heroics of the Avengers by asking if their “good violence” is enough to save the universe.

The superhero genre also offers insight into human relationships and the transcendent mysteries of hope, friendship, goodness and love that bind people together and give them purpose.

For example, in Infinity War, the theme of sacrifice looms large: will friends or family be sacrificed to gain power or stop Thanos? Even the good guys have to choose whether they’ll sacrifice others (even when requested to do so by one person).

For Girard, sacrifice is the key to revealing the type of person one is and community one lives in. Do we sacrifice others for security or power (a form of scapegoating) or do we offer ourselves in service to others (self-giving love)? The most complex superhero films entail an exploration of the hero who suffers or must sacrifice themselves, like Thor in Thor: Ragnarok, Batman in the Dark Knight trilogy or Superman in Superman Returns and Batman v Superman. 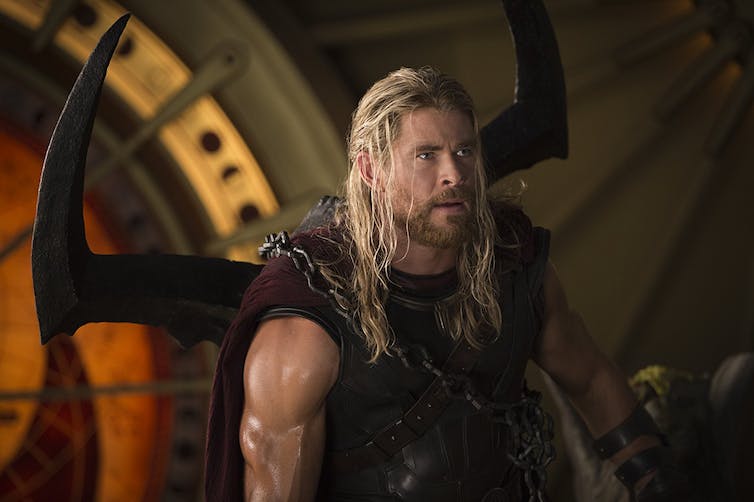 In Infinity War, Thanos shows clearly and brutally where he stands in this debate. He puts power and his vision of order and sustainability above his most intimate love. In performing a heart-wrenching act of sacrifice, he also shows that both the means and ends of a moral act matter.

Despite such themes, some criticise fantasy and science fiction films as mere escapism for a consumerist, affluent society. Their plots, they say, neglect the real problems faced by modern people, distracting us from consideration of wider systemic injustices.

While there is a clear escapist element to superhero films, they do deal with many of the problems of modern life, especially the rise of heinous forms of evil. Thanos might be seen as a brutal dictator who believes his utilitarian vision of life is best.

Moreover, we should not regard viewers of these films as merely naïve or gullible. After I saw Infinity Wars, I heard someone remark: “They played us hard.” Viewers are aware of the filmmakers’ tricks of the trade and enjoy (or criticise) the journey.

What about all that redemptive violence?

Superhero and sci-fi films can give the false impression that “good” or vigilante violence will always - or effectively - solve our problems.

Still, superhero movies are aware of this issue and grapple with it. Infinity War confronts the failures of heroes and their violence. Moreover, in earlier Marvel films, there was a split amongst the Avengers about the legal apparatus for authorising superhero action (centring on whether they would accept international oversight).

Of course, the “hero” category itself can become clichéd and unhealthy, projecting a range of qualities onto one person in a way that divorces him or her from the rest of us. For instance, Captain America can appear one dimensional in his unshakeable courage and wooden one-liners (though his character has been explored in more depth in recent films).

While the films’ portrayal of heroism can be uncritical, recent Marvel TV series, such as Jessica Jones and Daredevil, do grapple in complex ways with the “hero” label. They explore the humanity of each character, with his or her faults, traumas and difficult relationships, as they try (often against their will) to make the world better.

Because they offer us powerful mythologies, superhero and science fiction films can become all-consuming for some. They can act as a replacement for or replication of religion. However, if their significance is not exaggerated, they can inspire and challenge - both emotionally and existentially.

The reaction of the audience when I watched Infinity Wars attested to this – they gasped at the arrival of Captain America and applauded the heroics of Iron Man. At that most basic level, these heroes inspire, making us want to be better. But as the film shows, more than heroics alone are needed to face complex problems.