Following an epic and determined journey by an amorous male pygymy three-toed sloth, witnessing golden eagles duel over a fox carcass against a backdrop of majestic mountains, or simply being in awe of one of evolution’s most sublime creations, the sword-billed hummingbird, it’s fair to say I was more than a little excited to experience the Melbourne production of BBC’s Planet Earth II Live in Concert.

The show is a fusion of BBC’s extraordinary wildlife and landscape footage, from the Planet Earth II documentary series. It’s presented on a suitably massive screen, accompanied by a live orchestra playing a score written specially for this visual and aural celebration of nature.

The start of the show was sensational, a montage of wildlife imagery from around the world, with the emotional roller-coaster expertly enhanced by the beauty and fusion with the music that filled the room. It was akin to walking through a gallery, where the individual, finer details of paintings were unimportant, but the overall majesty of what was on show swept you away. I wish the remainder of the show had continued in this vein.

The actual images of wildlife were as we’ve come to expect from the BBC’s legendary wildlife team, second to none. A close-up of a lioness’s paw rippling as it moved across the sands of the Namib Desert while stalking a giraffe, a starling murmuration above Rome, langurs leaping through Jodhpur and, of course, the now famous great escape by a hatchling marine iguana from scores of hungry racer snakes were all captivating.

The orchestra was outstanding. Such was the power of the wildlife footage that at times it was possible to forget their presence, but at key moments onscreen they were most certainly heard and felt, providing a truly emotional and visceral experience.

There were many things to like, but a number of important elements didn’t work, which really detracted from what the show could have been. The first and perhaps most important problem was that each sequence was introduced, in far too much detail, by Eric Bana, who had the unenviable task of trying to replace some of David Attenborough’s narration of the original documentary series.

Bana’s commentary was aimed at making people more informed about the wildlife being featured, but it had the unfortunate effect of giving away exactly what was about to happen next, rather than allowing the audience to have the joy of discovering this for themselves, a very odd production decision. It made the performance feel quite stilted and disjointed, which wasn’t helped by an unannounced 20-minute intermission mid-show. 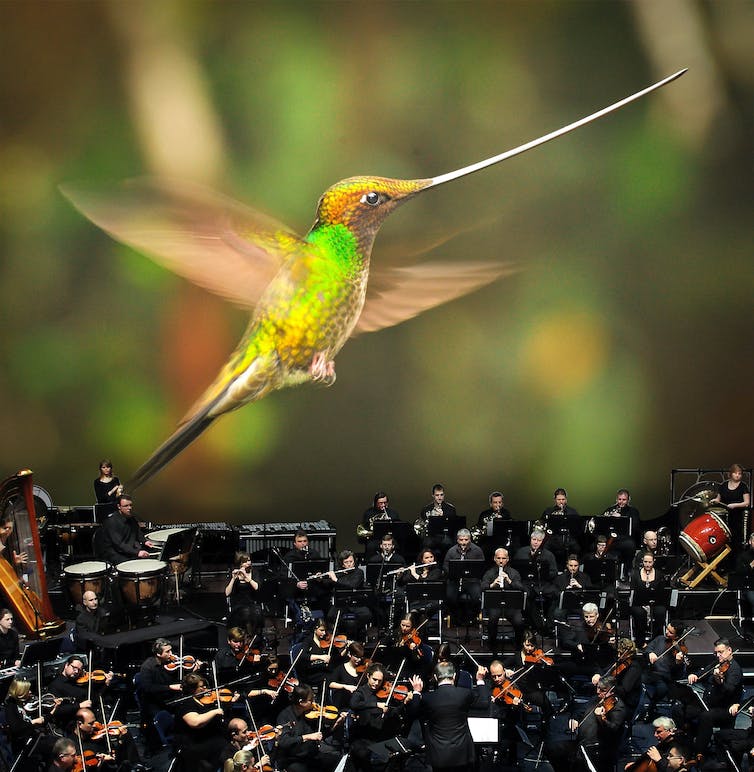 Bana is a fine Australian actor, but his casual approach and lighthearted jokes were unnecessary, and often not particularly funny. Most importantly, it took attention away from the main event, which should have been what was happening on screen. It reminded me of watching a great film on commercial TV and being engrossed, only to be wrenched out of this blissful state by the dreaded commercial break. This happened multiple times throughout the evening. Judicious and sparing use of surtitles could have remedied this situation.

Another deficiency was the editing and sequence of footage. We were told about the plight of a primate relative of humans, the Indri, from Madagascar’s rapidly disappearing forests. So why then did this sequence start with flying draco lizards from Southeast Asia and toucans from South America? Perhaps many were not bothered by this and instead it just reflects my ecological background. 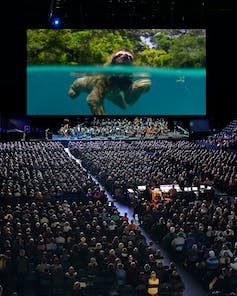 The Indri was one of several species to appear a number of times in the show, sometimes without narration or explanation. This seemed puzzling given how much amazing material the BBC has at its disposal. Australian wildlife was also conspicuous by its absence.

Finally, at times the show’s lighting was over-the-top, washing out and obscuring imagery on the screen.

There was an attempt towards the end of the show to send a message to the audience about the plight of life of Earth, including how our cities could better accommodate plants and animals to live alongside us. There were painful times during the show when I felt like I was watching soon-to-be ghosts, given the current and dire mass extinction event we have created and are witnessing. I couldn’t help notice the irony of the many audience members watching wildlife while drinking bottled water they’d bought during the show’s intermission, a symptom of our dependence on plastics and consumption.

There is no question in my mind that a greater union between the arts and sciences, such as this event, has enormous potential for positive change.

So my greatest hope is that everyone who attended the show felt moved the next day to assess their own choices and how they affect the other species with which we share this planet, and that together we collectively demand our governments to ensure a sustainable future that preserves Earth’s remarkable wonders.

Planet Earth II Live in Concert will be showing in Brisbane on May 1 and Sydney on May 4.