Expos remain popular even if the basic premise – nations gathering in one place to display their technological innovations – now seems outdated. Expo 88 was an event in both senses of the word. It was a planned occasion with a specific theme, but it was also a pivotal moment – a point from which things were never the same again for the host city.

Read more: How the Gold Coast games transformed a resort region into a city

This article explains the significance of Expo 88 and outlines why other cities should pay attention to this example of event-led urban regeneration.

Expo 88 was conceived hastily after Brisbane hosted the 1982 Commonwealth Games. The success of the Games had impressed Queensland’s pro-development leadership who were keen to reposition their capital as a world city, rather than a regional centre.

“Together we’ll show the world”: the TV commercial for World Expo 88. 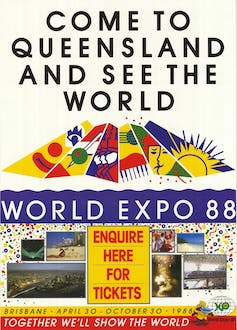 Brisbane’s A$645 million World Expo was part of Australia’s bicentennial celebrations, but the project was conceived and organised at the state level. The Queensland government’s support for the project came with one proviso: this had to be a “free-enterprise expo”, one that paid for itself. Perhaps surprisingly, given the track record of big events like expos and Olympic games, this was achieved.

Expo 88 was a success, not just because targets for participating nations, corporations and attendees were exceeded, but because the event was genuinely loved. People liked the pavilions and the formal entertainment, but they loved the riverfront setting, the animated walkways, and the festive atmosphere.

An academic study 15 years after the event found that memories were both strong and positive. One participant summed up the general feeling: “I remember being happy.”

It’s hard to find anyone in Brisbane who has a bad word to say about Expo 88. Given that most mega-events tend to divide opinion, that’s a considerable achievement. 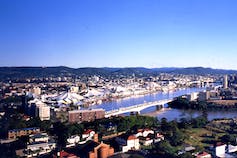 The expo contributed to the creation of a permanent 40ha leisure precinct along the southern bank of the Brisbane River. Brisbane City Council/Wikimedia, CC BY

Expo 88 was a temporary event but it changed Brisbane culturally and physically. It redefined the city as one oriented towards culture and leisure, turning citizens into cosmopolitan consumers. The expo also helped to create South Bank Parklands – a 40-hectare site that is now the city’s most popular leisure precinct.

However, the relationship between Expo 88 and South Bank is more complicated than is often assumed.

The original legacy plan was to sell the riverside expo site to developers. They wanted to create a tourist precinct typical of those that now dominate the world’s post-industrial waterfronts.

But the expo raised expectations and created a public appetite for a South Bank that could replicate the sociable festivity that people had enjoyed in 1988. The expo was now part of the city’s psyche.

This forced the (new) government to change the plans. A revised master plan was conceived – formulated by a company that specialised in theme park design – with half of the site retained as open space.

The behaviours, emotions and expectations engendered by Expo 88 influenced the reconfiguration of the site.

People enjoyed the expo so much that it led to a change of plans for the South Bank site. Brisbane City Council/Wikimedia, CC BY 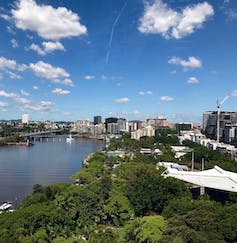 The parklands that opened in 1992 were a success at first, but flaws in the master plan, a failure to attract a broad range of users, and the lack of commercial revenue forced a rethink. The development corporation responsible for the site adopted a new vision – one to which contemporary cities should pay close attention. By designing a place that appealed to locals, and that was properly integrated into the surrounding area, officials assumed that tourists would be attracted too.

This is not a relaxing and tranquil space; it does not provide a way of escaping the city like Central Park in New York does. This is a precinct that hosts playgrounds, picnic lawns, event venues, urban beaches, paddling pools and cafes. It is Brisbane’s playground – used by locals and visitors – providing free fun by the bucketload. 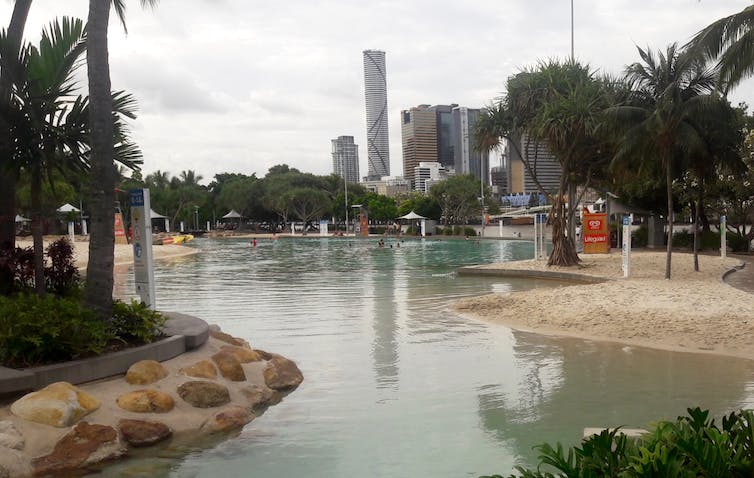 The temporary Expo 88 site has become a permanent playground for the city – used by locals and visitors alike. Andrew Smith

Read more: Building for the community is a win for the Gold Coast Games

Behind the carnival mask

Before touting Expo 88 as an exemplar for future projects, it is important to note less positive aspects that might be conveniently forgotten in oversimplified policy lessons.

Like many other mega-event projects and waterfront schemes, the development of Brisbane’s South Bank displaced low-income groups and “scruffy” industries which were swept aside by a growth regime intent on property development and new investment.

To justify the project, the existing site had to be denigrated. The Expo 88 souvenir program described it as “an area of derelict dockyards, unacknowledged brothels and disreputable hotels”. Only by representing South Bank as an area that was decaying, depraved and worthless could such large–scale transformation be justified.

Cities pursuing mega-projects today continue to use this dubious tactic.

Read more: Can our cities' thriving creative precincts be saved from ‘renewal’?

Lessons for other cities

This World Expo project was hastily conceived, and legacy plans had to be changed several times, but the creation of South Bank Parklands means Brisbane is still partying like it’s 1988.