It didn’t take long for incoming chief of the Australian Defence Force Lieutenant General Angus Campbell to find himself the centre of controversy.

Even before his feet are beneath his new desk, Campbell – who endured plenty of heat when he headed the government’s Operation Sovereign Borders a few years ago – is under fire from some past diggers and conservative commentators.

In his current role as army head, Campbell has issued an order banning death symbols, instancing the pirate skull and crossbones, the Phantom or Punisher symbols, and Spartans and the Grim Reaper. He declared in his directive that such emblems were “at odds with Army’s values and the ethical force we seek to build and sustain”.

Such symbology is never presented as ill-intentioned and plays to much of modern popular culture, but it is always ill-considered and implicitly encourages the inculcation of an arrogant hubris and general disregard for the most serious responsibility of our profession: the legitimate and discriminate taking of life.

Australians who served in Afghanistan will recall the ghoulish images on the helmets of American helicopter loadmasters. Symbols have become more prevalent among Australian soldiers recently, and in certain quarters there is concern about whether attitudes to taking human life have become more cavalier.

Critics of Campbell have been quick to turn his action into a fresh argument about the encroachment of political correctness into the military. 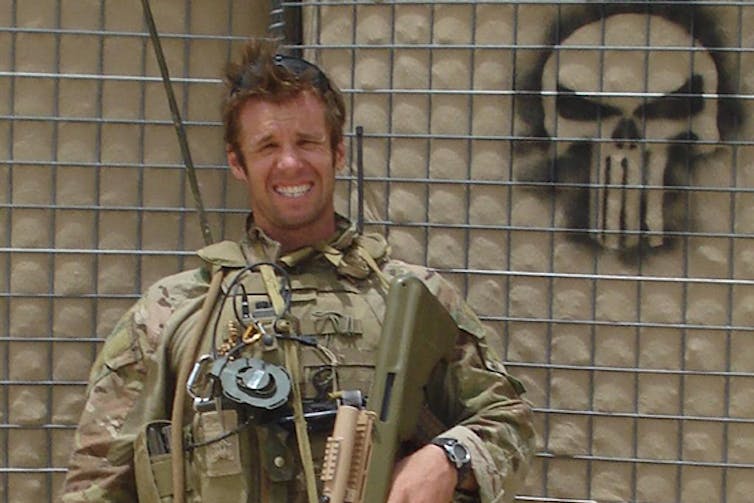 A former sergeant, Justin Huggett, an Afghanistan veteran, complained about “too many do-gooders and lefties peering over the military fence and looking in to see what’s going on”.

Sunday Telegraph columnist Miranda Devine declared Campbell “a disciple of the diversity religion” who had drunk that particular Kool Aid. Daily Telegraph writer Caroline Marcus said his giving priority to this matter was hardly surprising “when you consider the trajectory of the defence force in recent years”.

But that this is really about another story altogether was signalled by the tweet from Neil James, executive director of the Australia Defence Association, who bluntly declared Devine’s article “wrong”.

James argues it is both unprofessional and counterproductive operationally for a democratic country’s army to “not strictly preserve moral and legal distinctions between using proportionate lethal force and simply killing”.

It’s not political correctness to stamp out ill-thought through attempts to build teamwork or over-done digger black humour – especially where this risks conveying to the broader community that some diggers are dickheads, racists, or otherwise amateurish in their attitudes or motivation if not in their professional skills.

[Soldiers] understand death because they work in an unlimited-liability profession. But surely this strengthens the need not to glory in having to inflict it, rather than the opposite.

Those who have known Campbell a long time describe him as deeply thoughtful about the military and very much his own person. His career background reinforces his standing to make such an order: he speaks as one who has seen the sharp end of conflict.

The timing of this decision might have been unexpected, but Campbell knew that whenever it came, it would be unpopular with some within Army ranks. Indeed, he said in his minute to his officers:

I appreciate that without explanation some will rile at this direction, so please ensure my reasoning is explained.

Notably he added, “but be clear that I am adamant that this is right for Army”.

For Campbell, the issue is the proper mindset of those who are on occasion called on to kill in their line of duty. Adopting such a mindset is the soldier’s challenge; instilling it is the task of a commander.

It is important not just while the soldier is soldiering, but in life after the military too. The community has become increasingly aware of the traumas suffered by former veterans, which take multiple forms. Among these can be the “moral wounds of war” - keeping a strict ethical framework around the use of lethal force may help in preventing some of those.

In his preface to Nancy Sherman’s Afterwar, James M. Dubik, a retired Lieutenant General of the US army, writes:

War justifies – more importantly, demands - what, in peacetime, would be unjustifiable: the destruction of the lives and happiness of others. Those who fight live this paradox day in and day out.

And many of them live with it long afterwards too.

While Campbell’s move seems well-based in the theory of war, in practice it is a little messy. The Australian newspaper was quick to report that the Royal Australian Air Force’s early-warning and surveillance aircraft – which have been operating in the Middle East - carry the “Punisher” death symbol.

Defence Minister Marise Payne said exemptions could be applied for. Not that Campbell’s edict stretches to the air force or navy - yet. Such a direction is in practice less relevant to the other forces. But to be consistent, Campbell should have it applied broadly, when he does get his feet under that desk.

This article has been co-published with The Australian Strategic Policy Institute.